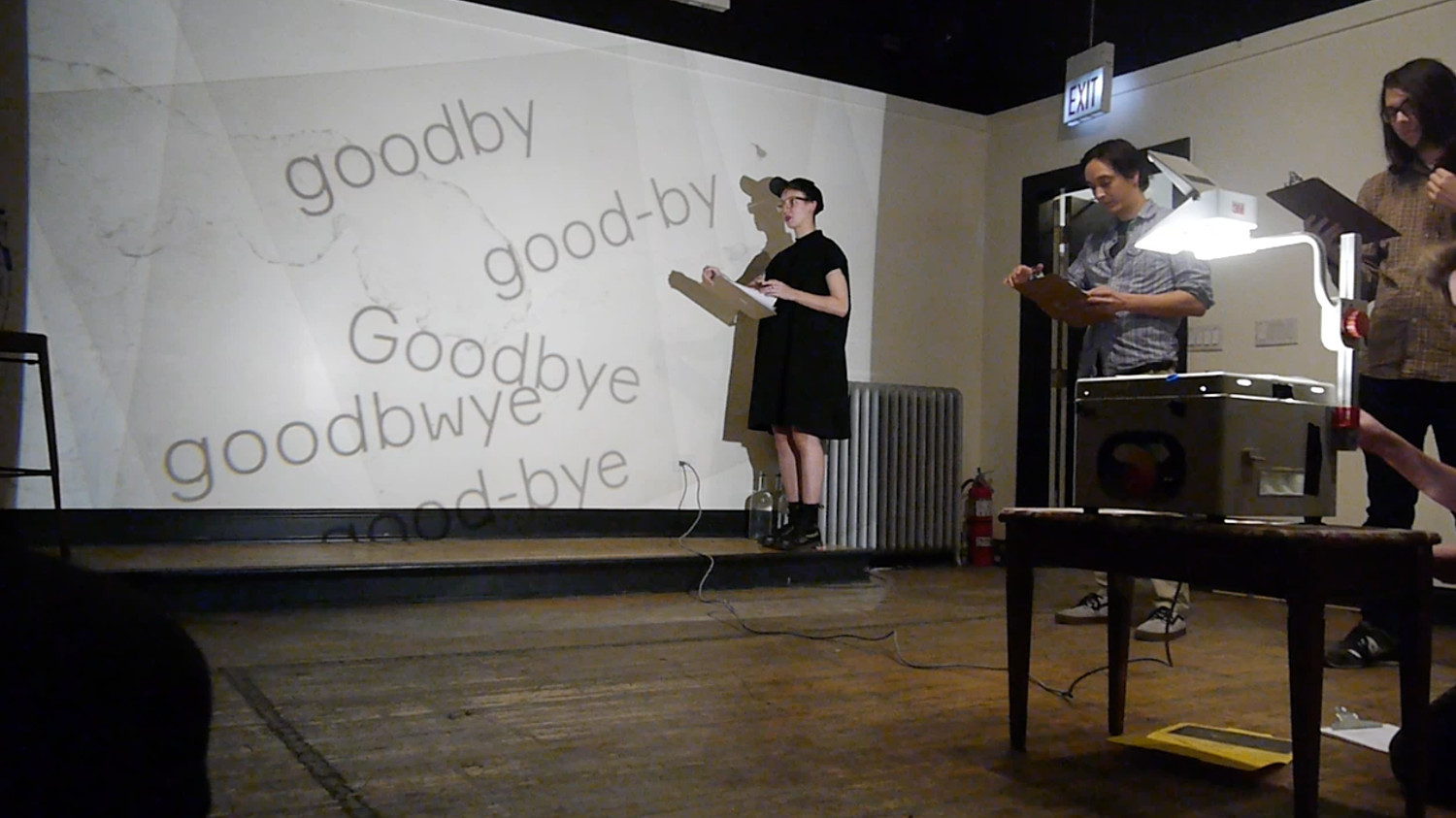 Saturn Returns makes its second pass at The Neo-Futurarium this March. The inaugural production of The Neo-Lab has had several months to continue the exploration of Tif Harrison’s play since the open house on October 15. This workshop performance also features audience-artist dialogue and Poems While You Wait, Typewritten Poetry on Demand.

Check out the video trailer here:https://www.youtube.com/watch?v=1hMHAWy0zMo

Tif Harrison and Elisabeth Barnick state, “Since October, each ensemble member has been developing a personal narrative in response to the question ‘why do we look up?’ After we turned from the vastness of the cosmos back to ourselves, we found we’d all landed in the untidy moments that send tremors through the sense of control we have over our own lives.

The responses we have are natural: pain, frustration, anger, ridicule, humorous deflection, and forgetting. But we are also trying to imagine ways to not have control, ways of living in ruin, ways of writing ourselves as the flayed tragi-comic creatures we are. This material started as five independently crafted ‘lectures’ that we are now weaving together in the rehearsal room.”

Presented through The Neo-Lab workshop program

For tickets or information, visit http://neofuturists.org/events/neo-lab-presents-a-workshop-performance-of-saturn-returns/ or call 773-275-5255.

When we’re afraid of being alone, why do we look up?

Saturn Returns is a two-year Neo-Futuristic exploration that asks larger existential questions about time, patience, and the vast expanse of an unknowable universe. Not content simply with looking inward, Tif Harrison and ensemble look upward and outward, offering observations on the silence and solitude of space, on the uncrossable distances between celestial bodies and the intimacy of standing next to somebody you love.Saturn Returns examines both the astronomical and astrological implications.

Poems While You Wait creates personalized poems by request on a 1917 Corona typewriter. Participants receive a signed copy of their poem. Visit www.poemswhileyouwait.com.

Neo-Lab is an original works residency that annually commissions one new play anchored by innovative approaches to creation. Offering public presentations and opportunities for audience interaction throughout the season, Neo-Lab supports artist retreats and stipends, public readings and presentations, and a full production the following season. During the 2015-16 season, Neo-Lab’s inaugural workshop is Ensemble Member Tif Harrison’s Saturn Returns.

Pastoral Artisan Cheese, Bread & Wine is happy to be the evening’s Opening Night Partner, providing their signature artisan cheeses and bread, and the event will include libations as well. Information about Pastoral can be found at www.pastoralartisan.com.

Tif Harrison (Creator) has been an Ensemble Member of The Neo-Futurists since 2011. In addition to writing and performing regularly in Too Much Light Makes the Baby Go Blind, Tif was a writer and performed in The Miss Neo Pageant, directed Analog, and served as an editor for the company’s most recent book, The Neo-Futurists: Body. She has performed at live lit events like The Paper Machete and Drinking & Writing’s AnnualBeerfly Alleyfight. When not on stage, Tif runs a micro-press called SundayHome Press publishing zines and mini-comics.

Elisabeth Barnick (Director) has worked as a Dramaturg, Assistant Director, and Director in Chicago, New York, and California. This will be her first time working with The Neo-Futurists.

The Neo-Futurists, performers of Too Much Light Makes The Baby Go Blindand creators of over 60 other original, full-length productions, are a collective of wildly productive writer/director/performers who create immediate, non-illusory, interactive performance presented at head-slappingly affordable prices.

The Neo-Futurists are partially supported by The Alphawood Foundation, Bloomberg Philanthropies, a CityArts Grant from the City of Chicago Department of Cultural Affairs & Special Events, the Illinois Arts Council Agency, Gaylord and Dorothy Donnelley Foundation, and The MacArthur Fund for Arts and Culture at The Richard H. Driehaus Foundation.