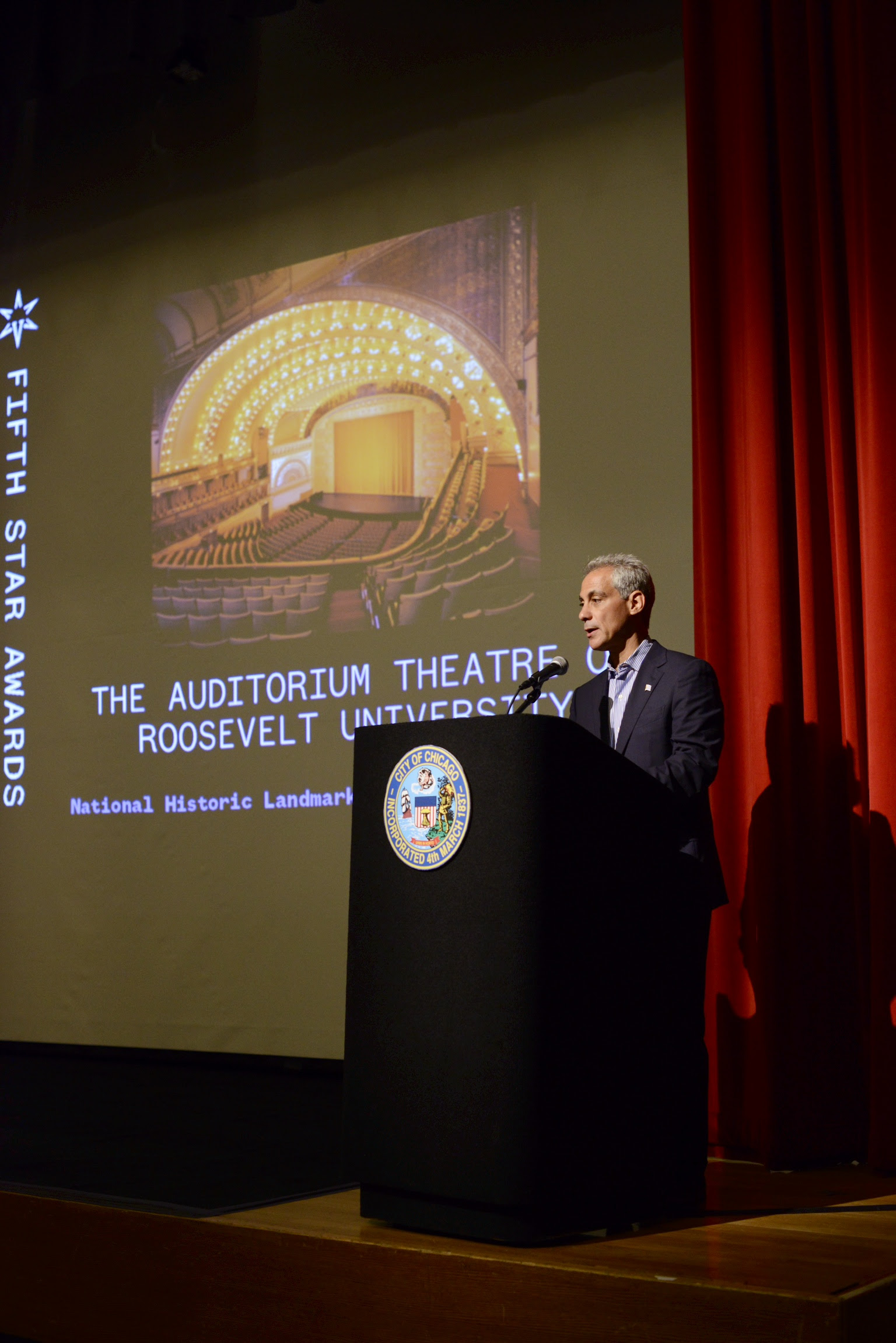 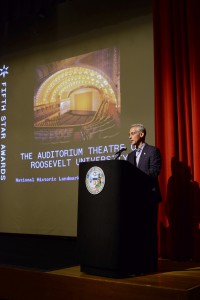 The Auditorium Theatre of Roosevelt University, celebrating their 125th Anniversary Season, has been chosen as one of five honorees for the City of Chicago and the Chicago Department of Cultural Affairs and Special Events (DCASE) inaugural Fifth Star Awards, celebrating the city’s creativity through artists, arts advocates and cultural institutions. The free public celebration, also honoring dancer Lou Conte, artist Richard Hunt, Grammy-winning composer, pianist and radio personality Ramsey Lewis and arts advocate Lois Weisberg, will be held on Wednesday, Sept. 17 at 7:00 pm at the Jay Pritzker Pavilion in Millennium Park (201 E. Randolph St.) and will feature live performances and tributes throughout the evening.

“We are privileged and humbled to receive this inaugural honor alongside the other esteemed and talented artists and arts advocates,” said Auditorium Theatre Executive Director Brett Batterson. “As we celebrate our 125th Anniversary Season, we are able to look back on the contributions that the Auditorium has made not only to the people of Chicago and the Cultural Landscape of this city, but also to the rest of the world. We look forward to spending the next 125 years continuing to fuel the artistic excellence that this city has become known for.” ​

“This is a celebration of Chicago, for Chicago,” said Mayor Rahm Emanuel. “The Fifth Star Awards honors artists whose work has forever changed and enhanced our city; artists who have made Chicago their muse, their stage and their canvas; artists who have been our ambassadors, bringing Chicago to the rest of the world, and the world to Chicago; and artists who have inspired and mentored new generations of artists who call Chicago home.”

The full lineup of performances will be announced soon. For details, visit fifthstarawards.org and join the conversation on Facebook (Fifth Star Awards, Millennium Park, Auditorium Theatre) and Twitter,@fifthstar_CHI @Millennium_Park @AuditoriumChgo.

Built in 1889 by the pioneering genius of Dankmar Adler and Louis Sullivan, along with their young draftsman Frank Lloyd Wright, the Auditorium Theatre, often referred to as “the eighth wonder of the world,” would catapult Chicago into the world’s eyes driving both culture and tourism to the Windy City.  At the time of its opening in 1889, the Auditorium Building was the epitome of modern design, the largest structure in the United States and the tallest in Chicago. During the grand opening night of the theatre, attendee President Benjamin Harrison was evidently so impressed that he was rumored to have whispered to Vice President Levi P. Morton, “New York surrenders, eh?”

The Auditorium Theatre played a key role in Chicago’s honor to host the 1893 Columbian Exposition, which, in turn, helped to make Chicago the city it is today.  Local civic leaders in Chicago were vying with those in St. Louis, New York City and Washington DC to host a fair that could reestablish Chicago as a solid destination for travel and commerce. The international sensation brought about by the opening of the Auditorium was seen by Congress as an indication that the people of Chicago possessed the vision, forethought, work ethic, and financing to successfully produce a world-renowned fair. These factors also led to the Auditorium Theatre becoming one of the finest venues in the world to present first-class entertainment and was the first home to some of the greatest performance institutions including the Chicago Symphony Orchestra and the Chicago Grand Opera Company.

Beginning in the late 1960s through today, a host of rock and pop performers have played at the theatre, including Jimi Hendrix, The Who, Janis Joplin, Bruce Springsteen, Elton John, Aretha Franklin, James Taylor and Bette Midler. The venue also began and continues to host some of the world’s premiere dance companies, including Alvin Ailey American Dance Theater, Bolshoi Ballet and American Ballet Theatre. Broadway musicals with long-running productions at the theatre have included “The Phantom of the Opera,” “Les Misérables,” “Miss Saigon,” “Show Boat,” “Hello Dolly!,” “The King and I,” and “The Who’s Tommy.”

Today, the Auditorium Theatre continues to maintain and restore the Adler & Sullivan building. Recent innovations include the introduction of the theatre’s first public elevator as well as the Katten/Landau Studio housed in the Roosevelt University Wabash Building. Typically, more than 200 performances and events—ranging from dance and theatre to music, educational programs and religious services—attract more than a quarter of a million people every year.

About Chicago Department of Cultural Affairs and Special Events

The Auditorium Theatre of Roosevelt University, located at 50 E Congress Pkwy, is an Illinois, not-for-profit organization committed to presenting the finest in international, cultural, community and educational programming to Chicago, and to the continued restoration and preservation of the National Historic Landmark Auditorium Theatre. The Auditorium Theatre is generously supported by the MacArthur Foundation, the Illinois Arts Council, the Sage Foundation, and the Palmer House Hilton. For more information about programming, volunteer and donor opportunities or theatre tours, call (312) 341-2310or visit AuditoriumTheatre.org.