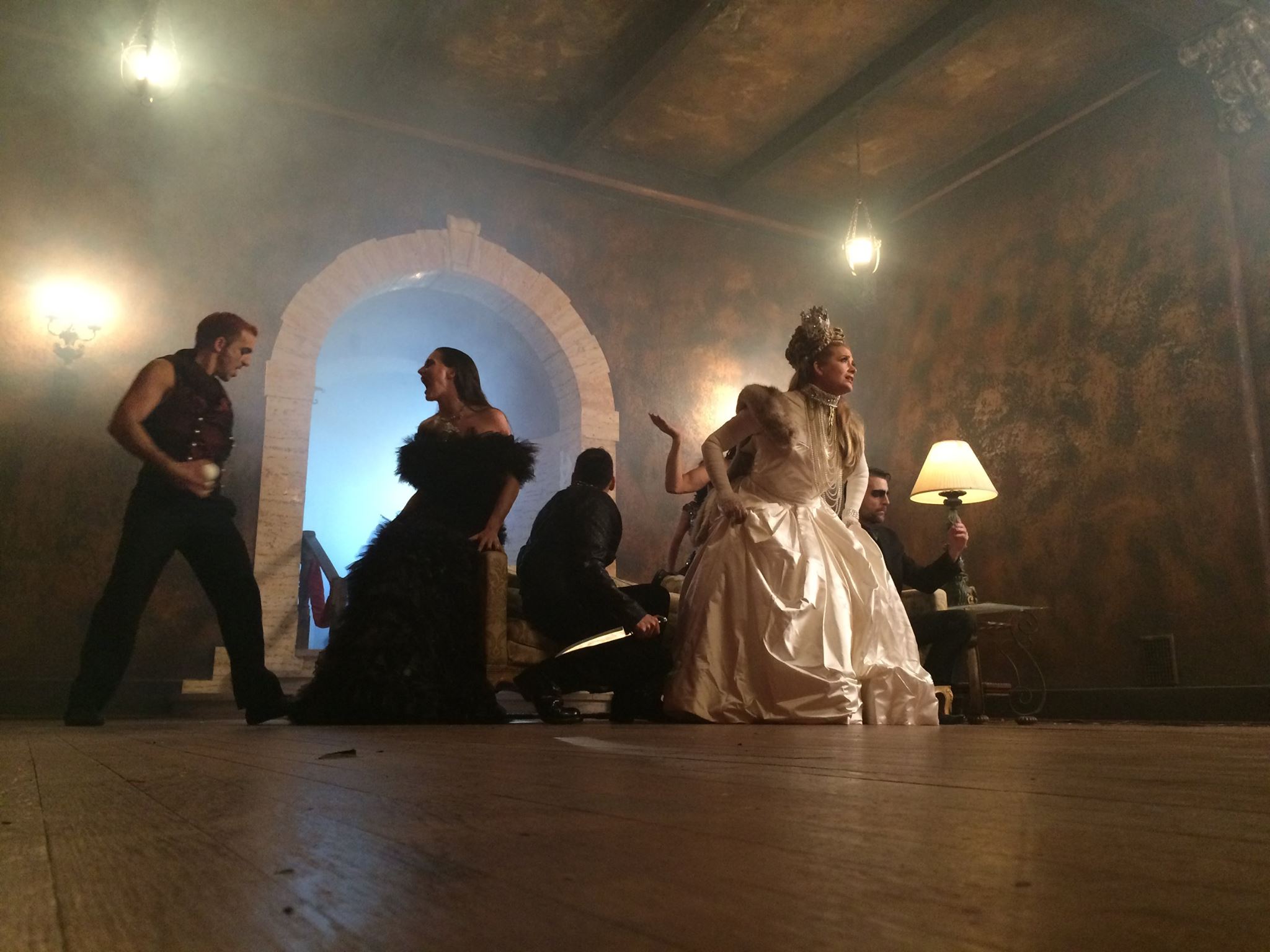 EMPIRE VAMPIRE is a short musical film about epic change, starring The Goodnight Darlings, featuring performers from Cirque Du Soleil, The Orlando Ballet, and a cast of dancers, actors, magicians, & circus performers from across the globe. Directed by Sundance Film Festival Alumnus Roger Ingraham & Choreographed by Isis Masoud & Dancers, this film takes the Vampire genre to a whole other level.

Close Up Experience and The Goodnight Darlings (Kat Auster and Wilson Jaramillo) announce their new Short Musical Film, EMPIRE VAMPIRE. The innovative new Fantasy-Thriller Musical short film is blazing a trail, paving the way for a new genre that tells a story within a song, on screen, seamlessly intermingled with a vibrant array of performance and fine art.

The team is further bolstered by art director and stylist Joey Bevan and his Glam Squad (America’s Next Top Model, The X Factor) and onscreen featured performers who include members of Cirque de Soleil and the Orlando Ballet as well as magicians, dancers and circus performers from across the globe.

This collaboration is the first of its kind, bridging the gap between the artist, their audience and the marketplace via an intimate creative workshop cultivated by Close Up Experience. The result is an electrifying, multi-talented state-of-the-art product that catapults the artist from breakthrough to big-screen.

In the film, EMPIRE VAMPIRE, bandleader and Juilliard Actress, Kat Auster, is depicted as a Divine Goddess, who hosts a crowd of vampire performers, displaying their various skills to win her attention and receive her transformational blessing.

From talented dancers of all genres moving rhythmically around the court, to jugglers, knife throwers, sword swallowers, magicians, contortionists and acrobats, each approaches Her Majesty, aiming to win her favor. At the end, the lead Vampire, Wilson Jaramillo, engages in a face-off with the Goddess. She overpowers him through a psychic blast of insight. The mansion lights on fire, the lovers dance, and transformation is on the horizon.

At the helm of Close Up Experience is Creative Director and Choreographer, Isis Masoud. She has been featured on myriad media outlets across all platforms including: CNN, CBS, FOX, NBC, New York Magazine, The Huffington Post, and The New York Daily News and has worked alongside industry heavy-hitters, John Caird, David Parsons, Savion Glover, Dan Knechtges, David Schweizer, Billy Corben, Arin Crumley, Adam Shankman, Keith Young, & Mia Michaels. She recently choreographed for Hip Hop Icon Nas at Radio City Music Hall in NYC, and her work has been featured on So You Think You Can Dance, the ABC Family TV show Dance Fever, as well as the Off-Broadway shows At The Diner, Trash Warfare, & La Femme, winner of Best Ensemble at The Edinburgh Fringe Festival. She reached Internet fame with her web-series THE POLITE GIRLS! and won a coveted Webby Award for her Short Pole Dance Film THE LAST GOODBYE. Masoud studied at the renowned Feldenkrais Movement Institute, earned a degree in Theatre from University of Miami, and was on faculty at Steps and Broadway Dance Center in NYC.

“Close Up Experience is all about creating a space for creative expression, collaboration and learning, so artists can reach their full potential in a variety of different mediums.” Said Masoud. “By creating a studio that integrates education and collaboration through project-based learning it allows all different forms of artistry to work toward a common goal. While young dancers and performers have the opportunity to learn on a real set, a breakout band like The Goodnight Darlings get a chance to explore a new artistic avenue.”

“The whole experience was far bigger and more magical than we could have imagined,” said Auster and Jaramillo. “Isis has a supreme gift for connecting the right artists at exactly the right time. Then she works tirelessly to create the best vision possible so as to glean the most talent out of everyone involved. We are honored to see EMPIRE VAMPIRE so fully realized.”

About Close Up Experience

Close Up Experience is an on-camera workshop for dancers where they learn how to make the shift from stage to screen by performing in an official music video for a hot new artist with an award-winning creative team. This project lives at the intersection of film, music, fashion, and dance education. In addition to creating a unique learning experience for dancers, it also offers a talented new artist the opportunity to create a full production music video for free. Close Up Experience simultaneously fills a desperate need for teaching on-camera technique for dancers, while also offering an opportunity that can jumpstart the career of undiscovered musicians and artists.