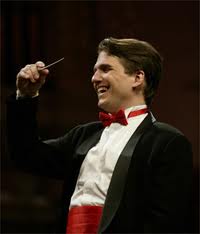 Since 1995 Keith Lockhart has held the baton as the conductor of one of America’s greatest institutions, The Boston Pops. On November 30th, the Boston Pops Esplanade Orchestra (the touring arm) will perform their Holiday Concert at the Auditorium Theatre along with the sensational vocal group Rockapella. I talked with Keith about the upcoming concert as well as how the Orchestra has had to change with the times since Arthur Fiedler and John Williams.

MJR: Hi Keith! What type of program will you be bringing with the Boston Pops this year?

KL: Well each year we do about 50 performances during the holidays in a period of time from Thanksgiving to New Years. It has really become thehigh pointof our season. The usual thing with us is always trying to present a program will so many people that have so many different expectations with what they want to hear during the Holidays. Everyone can walk out thinking we programmed something just for them. That is the goal at any rate. And also the balance of the sacred and the secular, the classical and the just for fun.

MJR: Who is joining you on tour this year?

KL: This year we are bringing some good friends, the vocal group Rockapella who are known to a lot of people for their central role in ‘Where In The World Is Carmen Santiago?, but also have appeared on Leno and other places. We have appeared together many times but never in a holiday concert so we are very excited. We are going to be doing and all new repertoire, with some of their material and some of ours and some brand new for both. They are singing everything from The Little Drummer Boy to Angels We Have Heard On High. We are also going to be bringing a wonderful soprano by the name of Kathryn Skemp, who will be taking on the more classical part of the singing duties, as well as performing some pieces written originally for the Boston Pops, including Sleigh Ride which we are very proud of. There is also music from the Nutcracker and then an appearance by some big guy in a red suit. And of course there is the sing-a-long which has become such a part of our tradition.

MJR: What makes the Boston Pops so accessible decade after decade?

KL: I think it is because the charter of the orchestra, we are know going into our 127 season, to be an orchestra that is not preaching to the choir. The whole attempt of what we try to do is to take great music and contextualize it in popular culture and be an orchestra that people can approach without quite the nervousness that people sometimes feel with classical music. People feel that there is a force field around classical music and they fear they won’t have the tools to understand it. Boston Pops has been around for over a century to dispel that myth.

MJR: Very few conductors have crossed over to popular culture such yourself. What is relationship you have with the public that makes you relate to them so well?

KL: Partly, I think it is working as a conductor with this organization and fitting into what the needs of this institution are; which are different that if I were doing a subscription type series as the Boston Symphony has to do.

Arthur Fiedler invented the brand. John Williams came to it from a composer’s point of view; but for me, I have always been on the performance side of the coin. The venue of the Boston Pops is really a great opportunity to profitalitize about music. It is all about making the audience part of the experience.

MJR: How has the economy effected your orchestra?

KL: Knock on wood we have been more lucky then most. This institution has very deep roots and can weather things very well. We are not immune from it though. For us we have had to be a bit more un-experimental, which I think is a shame and look forward to that coming back, because I think being experimental is really the way to develop a audience that will be with you 25 years down the road. It has also effected our travel schedule as this is the first time we have gotten out of the Northeast in about 5 years.

MJR: How has marketing changed in the 16 years since you’ve been with the Pops?

KL: Well Michael, at the beginning, we didn’t really have to do any marketing. We just through up a sheet of paper announcing what we were doing and people would come. We never had to describe the program. Now we have gotten much more specific and targeted. That is not just do to economic factors, but it also just has to do with how people communicate now.

MJR: What do you like best about being a conductor and who did you admire most when you decided to enter the business?

KL: What I really like best is that it allows me to always be a student and keep learning. I keep refining my craft by seeing how people do what I do well and not so well. As far as influences, I would have to say Leonard Bernstein, hands down. He made conducting accessible through media.

MJR: Thank you so much for talking with me. I am a huge fan of yours and certainly appreciate all that you have done for music.

KL: Thank you Michael, that is terrific to hear and I can’t wait to visit Chicago again.

The Auditorium Theatre of Roosevelt University (ATRU, 50 E. Congress Parkway) will be filled with holiday cheer when the world-renowned Boston Pops Esplanade Orchestra joins with critically acclaimed a capella group Rockapella – for the first time ever in Chicago – for a joyous evening of music Wednesday, Nov. 30, 7:30 p.m. The audience will enjoy unique takes on classic favorites and brand new originals, plus a special visit from Jolly Ole’ St. Nick and a time-honored audience sing along. Tickets start at just $32 and are on sale now, available online at www.ticketmaster.com/auditorium (http://www.ticketmaster.com/auditorium ) , by calling (800) 982-2787 or at the ATRU Box Office.
Keith Lockhart was appointed 20th conductor of the Boston Pops in 1995. He has since conducted more than 1,200 Boston Pops concerts, self-produced four recordings, recorded eight albums, made 67 television shows, and led 38 new programs and 33 national tours. Lockhart is loved by audiences for his inimitable style, through his consummate music making and his unique ability to speak directly to the audience about the music to which he is so passionately committed.
The New York Times calls the Boston Pops “the best known, most recorded, and arguably the most popular orchestra in the United States.” Known as “America’s Orchestra,” the Boston Pops have been a staple in American culture since 1885. The Boston Pops Esplanade Orchestra is the touring arm of the Boston Pops, organized by the management of the Boston Symphony Orchestra. The Pops play free outdoor concerts, tour throughout the United States, and perform Holiday Pops concerts and a New Years Eve gala. The Boston Pops have performed in 44 of the 50 United States and overseas as well. The Pops are the most recorded orchestra in the world with a discography of more than 100 albums.

Rockapellais one of the world’s most sophisticated and lasting pop vocal groups. Since its beginning as an a cappella quartet of Brown University graduates in 1986, Rockapella has developed into a high energy concert performance troupe that gives more than 80 concerts a year. Rockapella has also performed in Japan, Hong Kong, Singapore, Seoul, Switzerland and Germany and often perform a song or two in the country’s native language. “The best musical instrument is the human voice – if you’ve seen Rockapella you know that’s the truth,” raves USA Today.

Tickets are $32-$127 and are available online at ticketmaster.com/auditorium (http://www.ticketmaster.com/auditorium ) , by calling (800) 982-2787 or in-person at ATRU’s Box Office (50 E. Congress Parkway).
Auditorium Theatre 2011-2012 Subscriptions & Groups
Subscriptions for the Auditorium Theatre’s season and discounted tickets for groups of 10 or more are now on sale. For more information or to purchase a subscription or group tickets call (312) 431-2357 or visit auditoriumtheatre.org.