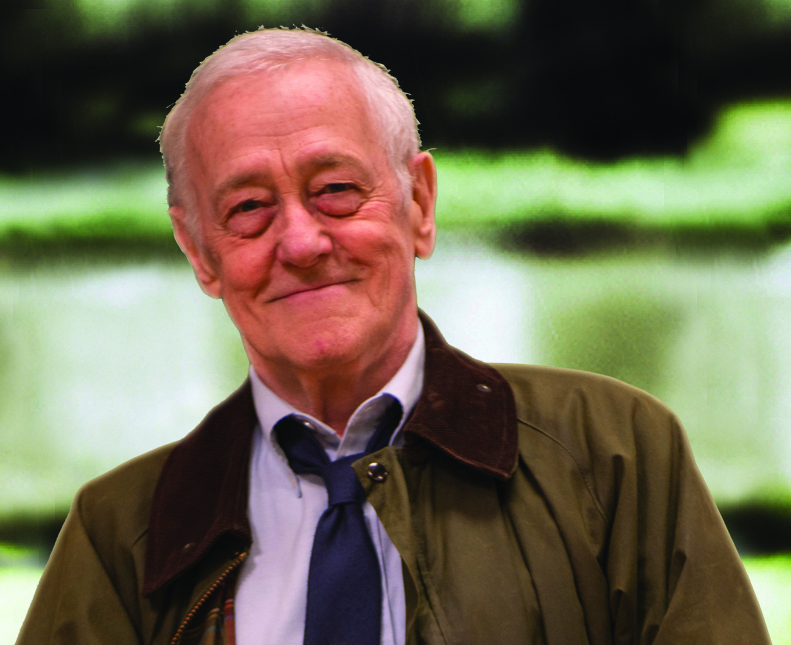 As a founding member the Steppenwolf Theatre, as well as an eleven year run on NBC’s hit sitcom FRAISER, JOHN MAHONEY has become one of the world’s most beloved and respected actors. Mr. Mahoney sits down with Michael J. Roberts to discuss the 125th Anniversary of Chicago’s Auditorium Theatre as well as his amazing stage and screen career.

Exactly 125 years from when the Auditorium Theatre of Roosevelt University opened its doors in 1889, the National Historic Landmark, led by Board Chairman Melvin L. Katten and Executive Director Brett Batterson, celebrates its milestone 125th Anniversary with a special performance, “Living the History – 125 Years of the Auditorium Theatre” on December 9, 2014. The celebratory evening, which begins with a star-studded program at the Auditorium Theatre (50 E Congress Pkwy), will include a tribute to the diverse entertainment that has been, and continues to be presented at the theatre including symphonic music, opera, Broadway musicals, rock music and dance. The performance will be immediately followed by a Gala Celebration Dinner at the Palmer House Hilton (17 E Monroe) to cap off the extraordinary night.
“The Auditorium’s 125th Gala Celebration showcases the diversity and scope of talent that has graced the historic landmark stage since it opened in 1889. We estimate that over 20 million audience members have attended the theatre in its 125 year history and the memories created for those patrons have helped to make the Auditorium the iconic destination that it is for all Chicagoans,” said Auditorium Theatre Executive Director Brett Batterson. “The world was astounded when the Auditorium opened its doors on December 9, 1889; the grandeur of Louis Sullivan and Dankmar Adler’s pioneering design put Chicago on the world map and paved the way for the city to host the 1893 World’s Fair. We are honored to be able to celebrate this important landmark‘s 125th birthday and promise a celebration worthy of this grand theatre’s legacy.”

Paying homage to the past, present and future of the Auditorium and its Chicago roots, the evening’s host, Chicago actor John Mahoney, will welcome friends old and new to the stage, helping to commemorate the original opening night of the theatre on December 9, 1889. Broadway legend Patti LuPone, whose great-grand aunt Adelina Patti sang on the very same stage at the original grand opening, will delight guests with show-stopping numbers throughout the evening. A performance by the Apollo Chorus of Chicago, who also performed at the 1889 opening, will regale the audience with a show-stopping rendition of “Do You Hear the People Sing?” from the iconic musical “Les Misérables”, a Broadway masterpiece that has been performed numerous times at the Auditorium.

Chicago’s premiere cultural institutions, including members of the Chicago Symphony Orchestra and singers Hlengiwe Mkhwanazi and Eric Owens from the Lyric Opera of Chicago (performing in the Lyric’s upcoming production of “Porgy and Bess”), perform, paying tribute to the stage that was built as Chicago’s home for classical music. Also paying tribute to the world-renowned dance that has graced the stage in recent years, dancers Christine Rocas and Rory Hohenstein from Joffrey Ballet—which has made its home at the Auditorium for the past 16 years—will perform the iconic balcony scene from Romeo and Juliet, and Alvin Ailey American Dance Theater will present a special performance by Chicago area native Vernard Gilmore.

Recognizing the astounding rock shows that filled and continues to fill the 3,875 seats of the Auditorium—and have launched the careers of some of the most acclaimed performers in history—the “All-Star Band” will have guests up on their feet and dancing in the aisles. Made up of legendary Chicago musicians including Jim Peterik (Ides of March and Survivor) on guitar and vocals, Barbara Unger-Wertico (The Buckinghams and Pat Metheny Secret Story Band) on keyboard, Richard Patterson (Miles Davis and Michael McDonald) on bass and Paul Wertico (Pat Metheny Group and Larry Coryell Power Trio) on drums, the “All-Star” band will turn the Auditorium into a full-fledged rock concert.

The star-studded performance begins at 6 p.m. and is immediately followed by the Gala Celebration where guests will be shuttled to the Palmer House Hilton and welcomed by Rich Daniels and The City Lights Orchestra, before being treated to an elegant dinner and more Anniversary surprises.

In honor of the momentous anniversary, First Lady of the United States, Mrs. Michelle Obama, will serve as the Honorary Chair for this historic season-long celebration highlighted by the gala celebration; MayorRahm Emanuel and Amy Rule will serve as Honorary Co-Chairs. Co-Chairs for the 125th Anniversary Season include Norm and Virginia Bobins, Steve and Nancy Crown, Jorge and Catrina Ramirez, Mikeand Beth Reese, Jim and Sandy Reynolds, Jack and Carole Sandner, Ed and Dia Weil and Jeff Tweedy and Sue Miller. Gala Dinner Co-Chairs are Joan Colmar, Phil Lumpkin and Helen Hall Melchior. The Gala Dinner Celebration is sponsored by the Pasquinelli Family Foundation.

“On behalf of all Chicagoans, we are thrilled to celebrate the Auditorium Theatre’s 125th birthday,” said Mayor Rahm Emanuel. “This national historic landmark is representative of our rich history in the arts as well as the unique Chicago architecture styles that have influenced American building structures for generations. The Auditorium Theatre continues to make Chicago a leader in the arts and culture today, and I wish the theatre nothing but good fortunes in the coming years.”

About the Opening of the Auditorium Theatre

Built in 1889 by the pioneering genius of Dankmar Adler and Louis Sullivan, along with their young draftsman Frank Lloyd Wright, the Auditorium Theatre, often referred to as “the eighth wonder of the world,” would catapult Chicago into the world’s eyes driving both culture and tourism to the Windy City.  At the time of its opening in 1889, the Auditorium Building was the epitome of modern design, the largest structure in the United States and the tallest in Chicago.

The Auditorium Theatre played a key role in Chicago’s honor to host the 1893 Columbian Exposition, which, in turn, helped to make Chicago the city it is today.  Local civic leaders in Chicago were vying with those in St. Louis, New York City and Washington DC to host a fair that could reestablish Chicago as a solid destination for travel and commerce. The international sensation brought about by the opening of theAuditorium was seen by Congress as an indication that the people of Chicago possessed the vision, forethought, work ethic, and financing to successfully produce a world-renowned fair. These factors also led to the Auditorium Theatre becoming one of the finest venues in the world to present first-class entertainment and was the first home to some of the greatest performance institutions including the Chicago Symphony Orchestra—taking part in the special celebration—and the Chicago Grand Opera Company.

Gala Celebration Tickets (includes performance)
Tables of ten are available at the $15,000, $10,000 and $5,000 levels; individual tickets start at $500. For tickets and information, please contact Amanda Martinez Byrne at (312) 341-3825 orabyrne@auditoriumtheatre.org.

The Auditorium Theatre of Roosevelt University, located at 50 E Congress Pkwy, is an Illinois, not-for-profit organization committed to presenting the finest in international, cultural, community and educational programming to Chicago, and to the continued restoration and preservation of the National Historic Landmark Auditorium Theatre. In August of 2014, the Auditorium Theatre was named as an inaugural Fifth Star Award Honoree by Mayor Rahm Emanuel and the Chicago Department of Cultural Affairs and Special Events.  The Auditorium Theatre is generously supported by the MacArthur Foundation, the Illinois Arts Council, the Sage Foundation, and the Palmer House Hilton. For more information about programming, volunteer and donor opportunities or theatre tours, call (312) 341-2310 or visit AuditoriumTheatre.org.