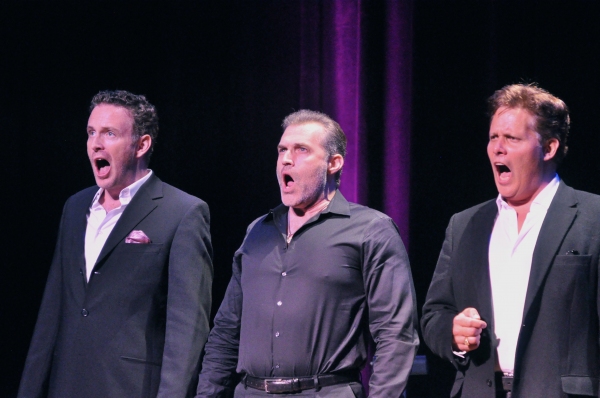 Conceived by three-time Tony Award nominee Marc Kudisch, and written by Kudisch along with Broadway veteran Merwin Foard, Metropolitan Opera star Jeff Mattsey, and Musical Director Timothy Splain, BARITONES UNBOUND explores “the uncommon voice of the common man.” Starting in 1791 with the first major baritone role, Papageno in Mozart’s The Magic Flute, our Baritone guides create for our eyes and ears each musical period raising the Baritone’s stature making him hero, anti-hero, and ultimately the romantic voice of the common man. Using theatrical and musical mechanisms, world-renowned voices but, above all, a lot of comedy, Broadway star Marc Kudisch, and international opera stars Nathan Gunn (amusingly referred to as the Barihunk or the Hunkitone) and Mark Delavan (The Voice of God) give you an unforgettable, laugh-filled, thoughtful and ultimately moving musical theatrical evening.

Highly well-received in its world premiere at Boston’s ArtsEmerson, the Boston Globe declared “Tenors, your time is up! A captivating night with Baritones!” Beloved by audiences, these guys just let loose and give you a great time – all the while, taking you through almost 300 years of some of the greatest music ever composed for the voice.

David is the Artistic Director at ArtsEmerson in Boston, where he staged the world premiere of Baritones, as well as Daniel Beaty’s Breath and Imagination and Mr. Joy, also currently touring nationally. He has directed new works at Arena Stage, Asolo Repertory, Berkeley Repertory, Intiman, and dozens of world premieres in the San Francisco Bay Area. He spent six seasons as Associate Artistic Director at Arena Stage, leading the artistic development team on over 50 productions, including the Tony-winning productions of 33 Variations, Next to Normal(Pulitzer Prize) and Who’s Afraid of Virginia Woolf. He was the founding Artistic Director at San Francisco’s Z Space, a theater development center now in its 22nd season, where he developed and directed five monologues and three films with Josh Kornbluth. He is a co-founder of HowlRound (howlround.com) and a member of SDC. You can follow him on Twitter at @ddower.

The artistic team for BARITONES UNBOUND is led by Director David Dower. Scenic Design is by Hershey Felder and Trevor Hay, Sound Design is by Erik Carstensen, Lighting and Video Design are by Christopher Ash. Scenic Decoration is by Meghan Maiya. Karen Racanelli serves as Executive Producer and the Production Stage Manager is Rebecca Peters. Hershey Felder and Samantha F. Voxakis serve as producers.

All tickets are $60. Tickets can be purchased at The Royal George Theatre box office or by calling 312.988.9000. Box office hours are 10 a.m. – 6 p.m. Tuesday through Saturday. Tickets may also be purchased online at www.ticketmaster.com  TICKETS ARE NOW ON SALE