BEAUTIFUL Is A Modern Masterpiece 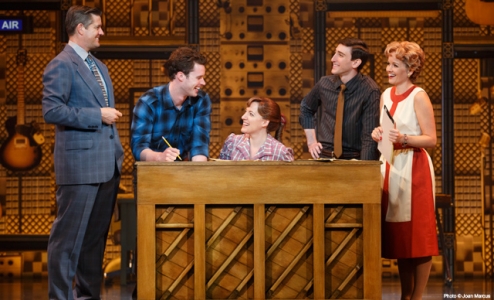 Growing up in the early 1970’s entering high school, I started putting together my music collection. One of the earliest records I purchased was the Carole King “Tapestry” album and cassette. I was mesmerized by her songs and the sound of her voice. I remember the songs Tapestry, Smack Water Jack, You’ve got a Friend, So Far Away, I Feel the Earth Move, It’s Too Late, Will You Still Love Me Tomorrow, Where you Lead, You Make Me Feel like a Natural Woman and Beautiful. During that time, I realized that Carole King wrote all of the songs on the album as well as performed them. However, at my young age, I was unaware of her many years of experience as a songwriter for the hottest singers during the late 1950’s and 1960’s. “Beautiful” The Carole King Musical fills in that gap.

“Beautiful” is a story about a young woman in Brooklyn named Carole Klein, later to become Carole King; (Abby Mueller) who loved music and loved to write music. At 16 years old she had the confidence to take her compositions to New York to sell them to Producer, Don Kirshner, (Curt Bouril), where he buys her first composition. There Carole meets Garry Goffin, (Liam Tobin) who becomes her lyricist and they ultimately fall in love. Carole and Garry end up with child and marry to continue their pursuit for fame writing the perfect music for 1960’s song groups like the Shirelles, and the Drifters. They succeeded in meeting their goals. However, as their life continues, Garry Goffin is persistent with his pursuit for fame and excellence. Carole only wants to settle down and raise their family. Goffin’s drive is further motivated when the songwriting duo of Barry Mann, (Ben Falkhauser) , and Cynthia Weil, (Becky Gulsvig) compete for the perfect performers for their songs. Even though they all became friends, their rivalry continued through the years.  Through the years, Garry Goffin’s drive becomes an obsession and he drifts from Carole to relieve his stress. When Carole finally realizes that her marriage is in jeopardy and cannot be saved, she decides to leave Goffin to write and perform her own compositions. “Beautiful” is a perfectly orchestrated and interesting story. It has purpose, it has love, it has beautiful music, and a wonderful resolution.

When “Beautiful” The Carole King Musical opened in New York in early 2014, Tony Award winner, Chicagoan, Jessie Mueller starred in the production.  Jessie was mentored by Carole King which led to her successful TONY award winning performance. When “Beautiful” was cast in Chicago, Jessie’s sister Abby was cast for the part of Carole King. From her performance, I can see that talent runs in the Mueller family. From beginning to end, Abby captured the early Carole King’s persona which continued to grow throughout her performance. Her personality and her wit drew the audience closer to her character. Abby’s performance shined throughout. During the curtain call her beaming face beamed with pride for a job well done. It was truly well deserved.

Supporting actor Liam Tobin gave an acceptable performance as Carole King’s husband Garry Goffen.  During the 1st act, Tobin’s chemistry with Abby was beautiful. The audience saw his love and his drive for excellence. Unfortunately, as Tobin’s character became more intense during the 2nd act, Tobin’s interpretation became a little over the top which made his character a little less believable. I am hoping that Tobin can give the 2nd act the same type of depth he gave in the 1st act. Thankfully, Tobin’s weaker performance did not take away from the excellence of this production. However, I believe that it can be corrected through additional direction.

The writing team of Barry Mann and Cynthia Weil was a charming subplot. Actors Ben Falkhauser and Becky Gulsvig were wonderful and had engaging chemistry.  Their personalities blended flawlessly, creating great music together, and an interesting funny love interest.

The entire ensemble was sensational recreating the musical groups of the Shirelles, Little Eva, the Drifters, The Righteous Brothers, and Neil Sadaka. They were successful in recreating all of the sounds from those early groups creating an enjoyable musical experience..

Director, Marc Bruni did a stellar job with making “Beautiful” a believable and interesting story. The pace for this production was amazing in changing scenes like magic. I particularly loved the spinning spinet piano.

The set and Scenic Design by Derek McLane, and Lighting Design by Peter Kaczorowski, were beautiful producing rapid interesting changes between scenes which were flawless. Costume designer, Charles G. LaPointe deserves accolades for recreating the great 1960’s costumes and the on stage costume changes that were purely magic.