After 18 Years THE LION KING Remains Theatre At Its Finest 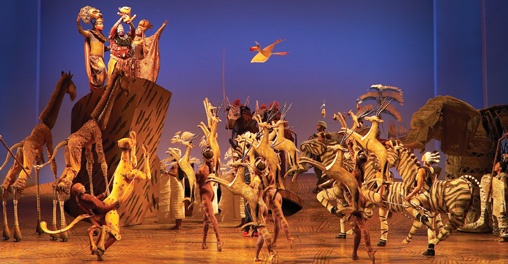 It is hard to believe that Disney’s The Lion King celebrates its 18th year as the reigning king of Broadway, with tours all over the world. Now in a seven-week engagement at the Cadillac Palace Theatre I was reminded why it is still one of the most popular shows that Disney has created and one of the most popular shows running. This is the fourth tour of this show that I have seen and it still moves me, engages my imagination, stirs my senses and touches my heart in a profound way.

The Lion King began its life as an animated film in 1994 and, like Beauty and the Beast and other Disney animated films, transferred onto the stage under the brilliant design and direction of Julie Taymor. There is no doubt in my mind that without Taymor this Lion King would never have achieved the overwhelming success it has and Disney should forever be in her debt.

On the surface The Lion King, a coming of age parable set among animals indigenous to its setting, the African savannah, tells the story of Simba, the lion cub who rises to be King of the jungle. However the real theme of the story is about the circle of life which connects us all to our ancestors who have passed and the karma which occurs when the delicate balance of order is disrupted through violence (very fitting for what is happening today).

This particular tour of Lion King is stellar on many levels. From Taymor’s extraordinary African and Japanese Kabuki inspired costume and set design to Elton John’s magnificent choral score to the largely outstanding cast. Leading the cast as the King of the jungle Gerald Ramsey’s Mufasa, Simba’s father, is king of the stage. With a powerful presence and voice you believe he is a King in his last days, struggling to hold on to power and teach his son that the power of being a leader of others comes from the hard and not the stick. Ramsey acts as a strong anchor for the show.

Another outstanding performance comes from Mufasa’s brother, the villain Scar, played by Patrick R. Brown. He has just the right balance of menace, camp and understatement.

As our tour guide of this expedition Mukelisiwe Goba’s Rafiki is the best I have seen to date. She sets the stage and takes us on a magical journey into Africa (the legendary opening number still thrills and has the audience roaring).

As Simba’s two sidekicks TImon (Nick Cordileone) and Puumba ( Ben Liptz) steal much of the show and nail the Jewish Vaudevillian shtick that drives the humor (which can easily fall flat).

The actor playing young Simba (not sure if it was BJ Covington or Tre Jones as the role is shared) seemed as though he was a little unsure of what he was doing and appeared to be going through the moves (this was especially noticeable when he discovers his father Mufasa is dead).

As older Simba Blaine Alden Krauss is also one of the best I have seen. He has the same presence, majesty and grace as his father and an infectious personality that draws you in (he is especially good with “He Lives in You”).

If there was any questionable casting it is in the role of Simba’s girlfriend the older Nola. While Nia Holloway has a great voice she appears too mature to be playing a role of this age, appearing more like his mother than his girlfriend. The chemistry was also lacking which is crucial to their love story.

I cannot single out everyone else in the cast and musicians who are exceptional and had the audience on its feet as soon as the final curtain went down. It is a rare instance nowadays to experience such an enthusiastic reaction from an audience over a show that began its life as a cartoon. The reason in my opinion is this show is timeless and universal and I expect it will be around for ages forever inspiring us about the fragile circle of life, effects of good and bad Karma that we put out into the world and demonstrating the powerful magic of theatre at its most fully realized.

The Lion King is at the Cadillac Palace for a limited seven-week run through Sunday, January 17th, 2016. Give the gift of love and imagination to the one you love and do not miss this rare treat.