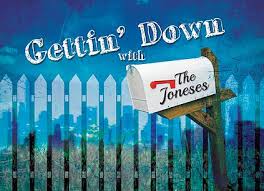 Jedlicka Performing Arts Center (JPAC) in Cicero, Ill. Is proud to present the rarely produced musical dramedy, Gettin’ Down with the Joneses.  This romantic fable of modern American life takes a satirical look at upper middle class corporate culture.  From hostile takeovers to financial market meltdowns, to downsizing and how it all affects one couple who is forced to reevaluate their lives and find the courage to follow their dreams.

Loren Comitor and Karolus Smejda’s first musical, Gettin’ Down with the Joneses is a rarely produced gem.  The concept for this show was developed by Comitor back in 1976, but real work on the script did not begin until 1985.  The show received its first and only mounted production in 1997 at the Victory Gardens Theater, but the material is still as fresh and timely as it was when the playwrights first started bouncing around the idea nearly 40 years ago. Clever, witty, insightful and musically rewarding, audiences will find this production as entertaining as it is thought-provoking. The music will touch you, the performances will move you and the story will have everyone saying, “This is my story.”

(On the campus of Morton Grove College)

The JPAC Theatre is located conveniently off the Central Ave. (north) exit of 1-55 just minutes from downtown Chicago on the campus of Morton Grove College.  There is ample free parking available.

Loren Comitor (Writer, Composer) began singing on drug store counters for ice cream and candy at the age of three. He created his own circuit around the neighborhood. He landed his first professional theatre role at age ten in a production of A Streetcar Named Desire. From then on he started working with Summer Stock companies from Harand Camp to the Muni Opera. After graduating from SIU Edwardsville in 1970 he began performing in major markets throughout the Western half of the U.S. as a Capital Records recording artist with a group called The New Kick. His world became involved with business and advertising as the itch to do more got him writing and producing Jingles and TV commercials. Besides creating the concept and writing and producing “The Joneses” a few years ago, he has also had written and produced the film “All In”starring Michael Madsen Dominique Swain and Louis Gossett Jr.  Loren is currently busy writing 2 more screen plays and a new musical.

Micheal A. Kott (Director/Associate Multimedia Director) has directed numerous plays and musicals both stateside and in Europe, including his critically acclaimed production of Murderer, by Anthony Shaffer. His JPAC directing credits include Doubt, Lilies of the Field and The Boys Next Door. Michael is also a veteran performer at the JPAC having been involved in 18 shows over the last 12 years. Among his favorites are Blood Brothers, Moonlight and Magnolias, Peter Pan, and Tuesdays with Morrie.  Micheal played the scene-stealing Psychic in Brain Damaged Film’s 2008 release Secrets of the Clown, available at www.amazon.com. Micheal is the founding director of the Green Door Theatre in Garlstedt, West Germany. Currently he is the Artistic Director of Master’s Backstage Players in Carol Stream, Illinois. Micheal was also an ensemble member of Cenacle Theatre in Chicago, where he acted and directed numerous productions. Mike is also the multimedia specialist for Morton College.

The Jedlicka Performing Arts Center is a professional, non-equity, 346-seat theatre on the campus of Morton College in Cicero, IL. JPAC produces 6 shows a season and is now in its 32nd year. To date, the acclaimed JPAC Theatre has presented more than 150 productions to an estimated quarter of a million people and is one of the busiest non-equity theaters in the Chicago area.

JPAC’s national reputation grew over the years due to its lavish and daring productions on its intimate stage that caught the attention of producers from London to Broadway. In 1990, Academy Award winner, Joseph Brooks launched the North American Premiere of his West End musical Metropolis at the JPAC. After that many other Broadway and West End musicals have had their Premiere Chicago production at the theater including: The Baker’s Wife, Blood Brothers, The Who’s Tommy, Jekyll & Hyde, Aspects of Love, We Will Rock You, Phantom of the Opera and Big Fish. World Premiere productions include Nefertiti – The Musical, Danger Will Robinson! and the Liberace musical, Mr. Showbiz.

JPAC has also made a similar commitment to non-musical plays. Some of the world’s most successful and acclaimed playwrights made Chicago-area debuts of their work on the JPAC stage including Ray Cooney, Rupert Holmes, Neil Simon, Steven Dietz and Matthew Barber.

Combining an aggressive producing style and a willingness to take on any artistic challenge, the JPAC continues to provide vibrant and affordable theatre to everyone. More information at www.jpactheater.com