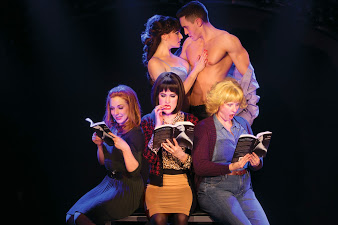 Ben Caplan discussing his role as Christian Grey in the hit production of 50 Shades: The Musical Parody. Ben is a graduate of NYU’s Tisch School of the Arts (Atlantic Theater Company) Ben’s recent credits include Ragtime (Willie Conklin), A Midsummer Night’s Dream (Puck), and The Last Days of Judas Iscariot (Caiaphas/Judge). . For more information visit BroadwayInChicago.com

Broadway In Chicago is thrilled to announced that with sold-out audiences across the country begging for more, 50 SHADES! THE MUSICAL PARODY returns to Chicago for a limited one-week engagement at the Broadway Playhouse (175 East Chestnut) January 13 – 18, 2015.

The Fifty Shades of Grey trilogy has shattered sales records around the globe with more than 100 million copies sold worldwide and a Universal Pictures feature film releasing on Valentine’s Day 2015 is sure to be a cinematic blockbuster. This sexy and hilarious send-up to Fifty Shades of Grey, the greatest novel EVER, has audiences rolling on the floor and dancing in the aisles! 50 SHADES! THE MUSICAL PARODY is the hilariously naughty satire that explores the steamy relationship between Christian Grey and Anastasia Steele, as seen through the eyes of a trio of girlfriends at a book club meeting. As the women devour the novel, the character’s delicious affair comes to life before their eyes. After all, who needs staid book club fare when a book like this can be so…stimulating. This laugh-out-loud musical features a sassy original score, including such songs “Open Your Book,” “I Don’t Make Love,” and “There Is A Hole Inside Of Me.” Like the book series, 50 SHADES! is surely not for those under the age of 18, but does not cross boundaries that would make general audiences squirm. 50 SHADES! is produced by Marshall Cordell, Albert Samuels and Emily Dorezas.

Quotes about 50 SHADES! THE MUSICAL PARODY

“50 Shades! The Musical is the perfect appetizer to the upcoming movie!”
– Entertainment Weekly

“Clever and wildly entertaining! Newcomers and fans alike should enjoy getting down
and dirty.”
-Variety

“Finally a play your inner goddess, your book club and your mother-in-law can all agree on!”
-Time Magazine

“HIGHlariously Hawt! Absolutely perfect! Catch it if you can!”
– Perez Hilton

“Take your inner goddess to this smash hit!” – Time Out Los Angeles

TICKET INFORMATION
Group tickets for 10 or more are now on sale by calling Broadway In Chicago Group Sales at (312) 977-1710. Individual tickets
for 50 SHADES! THE MUSICAL PARODY will go on sale at a later date. For more information, visit
www.BroadwayInChicago.com or www.50ShadesTheMusical.com.