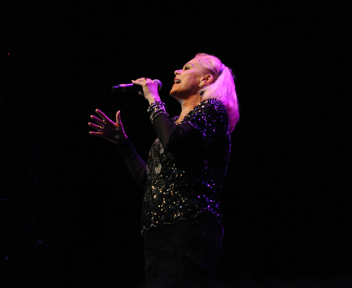 Torch songs, smoky clubs and great music… I came to Chicago as a fresh young face out of Minnesota and an incredible world of music opened up to me, I worked in a piano bar that catered to conventioneers: dirty jokes and show tunes, lived at the Maryland Hotel and spent off nights at Punchinello’s, Acorn on Oak, Playboy’s Penthouse Room and the Croydon Hotel to name a few. I met amazing people and heard fantastic stories of the great Chicago clubs such as Mr. Kelly’s, The London House, Chez Paree, The Happy Medium and more. I am having a fantastic time exploring the history of the classic clubs of Chicago and the artists who played them, including Ella, Sarah, Barbra, Sophie, Julie Wilson, Bette Midler, Oscar Brown Jr., Nat “King” Cole and so many more. We’ll be singing the Great American Songbook: Rodgers and Hart, Porter, Gershwin, Billy Strayhorn, Harold Arlen and more!

And I’m preparing my tribute to the great Julie Wilson, who was my inspiration and mentor and came to see me last year at the Metropolitan Room in NYC!

Bobby Schiff is the musical director and Jim Cox and Scott Mason are the bassists. Bob Breuler will lead the tour and we will have guest artists at each performance event.

“Suzanne Petri happens to be the exception that proves the rule, her work at once dramatically penetrating and musically evocative and formidable actor-narrator Robert Breuler.”

Suzanne Petri From stage to TV, from nightclubs to concert halls such as New York’s Jazz at Lincoln Center, Suzanne has established herself as one of the Windy City’s premier entertainers. Suzanne has performed to SRO crowds at some of the Chicago area’s top stages including Pritzker Pavilion Millennium Park, Park West, Drury Lane Water Tower, Davenport’s, Maxim’s, Katerina’s and Toulouse on the Park. The nationally recognized cabaret diva, Suzanne has been featured at the Chicago Humanities Festival and the Mabel Mercer Foundation’s Cabaret Conventions in New York City and Chicago. Her one-woman cabaret shows have won rave reviews and critical acclaim including several “Ten Best Shows of the Year” citations by both After Dark Chicago and Cabaret Hotline Online. Suzanne is President Emeritus and a Founding Member of the Chicago Cabaret Professionals. Petri has appeared in acclaimed stage productions such as Oklahoma! Hank Williams Lost Highway and Zorba; motion pictures such as Milwaukee, Minnesota with Bruce Dern and Randy Quaid, Disney’s Just Visiting with Christina Applegate and Indy film Lac Du Flambeau; TV roles on Early Edition, Evil Has A Face with Sean Young and she has appeared in many Bernie Sahlins productions including Lysistrata, Bertha the Sewing Machine Girl and Under Milk Wood. A proud ensemble member of American Blues Theater she has produced, directed and appeared on dozens of Chicago stages including The Goodman Theatre, Steppenwolf Theatre, Chicago Dramatists, Victory Gardens and Northlight Theatre.

Suzanne has released her critically acclaimed debut studio CD Das Grand Tour and 2 live CD’s, “A Marvelous Party!” and “Marlene Muzik Live At The Skokie Theatre.” Her recordings are available online from CD Baby.com, Suzanne’s web site, as well as digitally at itunes.com.

Robert Breuler One of Chicago’s most respected actors joins Suzanne in one of their many collaborations, including their 30 year marriage and SuzBo Productions’ “Duo: 1 is 1, 2 is Math” their original musical, recently presented at Steppenwolf Theatre. From his first role at Joe Papp’s New York Public Theatre where he played Kress in David Rabe’s The Basic Training of Pavlo Hummel to Mornings at Seven at Drury Lane Water Tower, he has played over one hundred roles, including Big Daddy in Cat on a Hot Tin Roof; Moe in Riverview and Dean Strauss in Spinning Into Butter, at the Goodman. Bob is a member of the Steppenwolf acting ensemble where he has performed in over 40 roles in 27 years. Some favorites: Botvinnic in A Walk in the Woods by Lee Blessing, Father Lux in Our Lady of 121st Street, Pa Joad in the Grapes of Wrath, Charlie “Blackie” Blackwell in John Olive’s Killers which he recently directed at the Mary Arrchie Theatre. Favorite plays: Cherry Orchard, A Lesson Before Dying, The Time of Your Life, Mother Courage and Her Children, Uncle Vanya, The Infidel, and Molly Sweeney. Television credits: Prison Break, Early Edition, NYPD-Blue, The Untouchables, Angel Street and in made-for-TV movies such as Open Admissions, The Father Clements Story, and Keeper of the City with Lou Gossett Jr. Films include The Crucible, Trial by Jury, The Company, Love and Action in Chicago, Miles from Home, A Piece of Eden, and Suspended Animation. He recently performed at Millennium Park where he was in Studs Terkel’s Will the Circle be Unbroken? One of his favorite roles was with the St. Paul Chamber Orchestra where he played The Devil in Stravinsky’s The Soldier’s Tale. On Broadway he has been in The Grapes of Wrath, The Song of Jacob Zulu, Carousel and Death of a Salesman. He is a recipient of the William and Eva Fox Fellowship Grant.

Bobby Schiff, Musical Director On the Chicago and Los Angeles music scenes for over 35 years, Bobby Schiff has led orchestras and bands, performed on piano and keyboards, directed, composed and arranged for and with the best. Mel Torme, Peggy Lee and Bobby Rydell, are just a few of the premiere entertainers and musicians he’s worked with in the U.S. and internationally. Bobby has been playing piano and keyboards professionally since he was in high school. His classical training in piano performance and composition began at age five. A true music professional, Bobby has served for many years as a National Trustee and National Vice-President of the National Academy of Recording Arts and Sciences (The Grammys). He is currently serving as Vice President of the Association of Professional Orchestra Leaders. He also maintains his memberships in ASCAP and ASMA. On a day to day basis, Bobby is working primarily in Chicago as one of the nation’s premier vocal arrangers and accompanists. Playing, arranging and producing albums for numerous independent artists; he also performs with his own jazz trio at several Chicago venues. For the past three years Bobby has been Music Director for the Women of Southport Jazz Festival in Chicago. He leads several of his own successful events bands; Phoenix, The Bobby Schiff Band and the Bobby Schiff Jazz Trio, and he is a mainstay in the R&B events band Funk Among Us.

Jim Cox (Oct 28th + Nov 4th) grew up in Champaign, Ill., where he attended the University of Illinois and earned a Bachelor’s degree in Music Performance on the double bass. Upon graduating he toured with Earl “Fatha” Hines for three years, then settled in Chicago, where he has since worked full-time in the music industry. Jim has performed with numerous notable jazz artists, including Judy Roberts, Red Rodney, Randy Brecker, Louie Bellson, Rosemary Clooney, Eliane Elias and famed pianist Marian McPartland. Jim’s extensive discography includes projects across a wide range of musical styles: jazz, bluegrass, klezmer, folk, and New Age. He teaches string bass at three Chicago area colleges as well.

Scott Mason (Nov 7) is a native Chicagoan. After graduating from Grinnel College in 1975, he pursued his original ambition of becoming an orchestral bassist, playing with the Civic Orchestra of Chicago and studying with Chicago Symphony Orchestra principal Joseph Guastefeste. However, a strong interest in improvised music led him to lessons with the great bassist Rufus Reid, and in 1979 Mr. Mason switched his focus to jazz and commercial fields. Since then he has freelanced extensively in Chicago, playing with jazz artists such as Bunky Green, Joe Daley, Guy Fricano and Marshall Vente. He has recorded several albums with Vente’s Project Nine, and also on Fricano’s release Jazz Inside Out. In the commercial field, Mr. Mason has backed such diverse acts as Bob Hope, Carol Lawrence, The Fifth Dimension, Mary Wells, and The Lettermen. He has been on the faculty of The Music Conservatory since 1984.

“ … for listeners who wish to get underneath the skin of a song – to its center – Petri serves as fearless tour guide. “ “As a musician, Petri can arch a phrase for poignant effect or bend a pitch downward to evoke a touch of pathos.” “Gutsy…in the Julie Wilson mode.”

“Suzanne Petri has established herself as an actress who can handle classy and brassy with equal ease. Her gritty voice, crisp and witty delivery, and assured stage presence also suit her to musical theater of a certain high style.” (Critic’s Choice) Albert Williams, The Chicago Reader

“There are few performers around that can captivate an audience more than Suzanne Petri.   Possessing a sultry, sexy and powerful alto voice, Ms. Petri seems to get better every time I see her perform… “

“Who could ask for anything better! A true Renaissance artist herself Petri moves easily from night clubs to concert halls to stage.”
Kathleen Tobin, Beverly Review

“As when she stopped the show during March’s Chicago Cabaret Convention … audiences can always count on Suzanne Petri to entertain with style and artistry.” Jeff Rossen, Cabaret Scenes