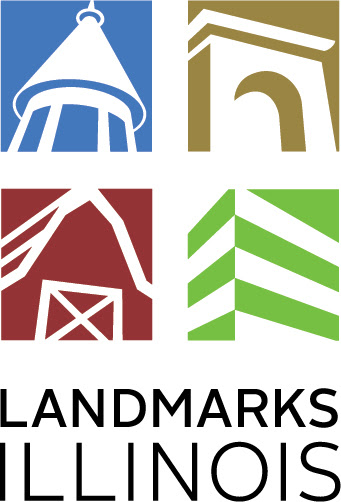 Bonnie McDonald, president of Landmarks Illinois, the state’s leading advocate for the preservation of historic sites and buildings, today announced three Chicago buildings that will be recipients of the 2015 Richard H. Driehaus Foundation Preservation Awards.  The awards ceremony will beSaturday, Oct. 17 at Venue One, 1034 W. Randolph.  The event is open to the public and begins with a panel discussion at 3 p.m., followed by the award ceremony at 4:30 p.m. and a cocktail reception at 6 p.m.The Project of the Year Award will be presented to Dorchester Art + Housing.  Led by Theaster Gates Jr.’s Rebuild Foundation, Architect Catherine Baker of Landon Bone Baker and Brinshore Development’s Peter Levani, this remarkable initiative reused the townhouses of an abandoned public housing development in Chicago’s Greater Grand Crossing neighborhood, converting the blighted block into a cultural hub featuring an active and popular Art Center and 32 mixed-income rental units, including spaces reserved for working artists.  Not only did this project transmute a neighborhood worthy of preservation, it has transformed a neglected neighborhood into a lively community replete with safe and affordable housing, an incubator for the arts and a safe space for Grand Crossing residents to congregate.

The President’s Award for Stewardship will be presented to the Glessner House Museum for its 50 years of interpreting and caring for this legacy building. Saving the Glessner House from a ruinous state in the 1960s is only the beginning of this Museum’s story. Ongoing improvements to the historic building are continually made to recreate the grandeur of architect Henry Hobson Richardson’s 1887 masterpiece.  The building’s parlor, guest bedroom and guest bathroom were all recently restored, which involved the meticulous reproduction of intricate, hand-painted canvas wall coverings and historic draperies. The museum will install a new geothermal system this year, allowing the staff to control heat and humidity levels for the first time and bringing 21st Century technology to shape the House’s future.  The Glessner House Museum’s ongoing stewardship of the Gilded Age mansion truly makes it a model as one of the finest examples of historic home museums in the nation.

A Driehaus Preservation Award for Rehabilitation will be presented to the Chicago Athletic Association Hotel, which meticulously renovated the 1893 Venetian Gothic Chicago Athletic Association Building, designed by Henry Ives Cobb, converting it into a luxurious 241-room boutique hotel and stylish restaurant.  The rehabilitation included the restoration of the building’s ornamental plaster and Carrera marble flooring, the construction of a rooftop deck and updating windows, mechanical, electrical, plumbingand A/V systems. The building twice appeared on Landmarks Illinois’ “Most Endangered Historic Places” list; this project not only restored a beautiful, iconic building on Chicago’s most traveled street but also opened the spectacular space to the general public for the first time.

“This has been an extraordinary year for preservation in the Chicago area,” said Bonnie McDonald, president of Landmarks Illinois. “Increasingly, building owners and developers are recognizing that the preservation and reuse of notable architecture not only enhances thebeautyofthecity, but also can significantly improve the vibrancy and livability of our neighborhoods, fostering civic pride, communityinvolvement and additional reinvestment.

“I am extremely happy to be honoring Dorchester Art + Housing for their remarkable work, thoughtfully rehabilitating an abandoned CHA housing development into a dynamic, thriving neighborhood,” added Richard H. Driehaus juror and Landmarks Illinois board member Tiffany Hamel Johnson. “This beautiful development is a blueprint of how a public housing project can be reimagined in a creative and transformational way. The work of Theaster Gates and his collegues is a shining example of how the inventive reuse of neglected buildings can improve the lives of those who live in that area. This project will undoubtedly serve as a template for future positive innovation.”

The nine winners will receive a Richard H. Driehaus Foundation Preservation Award—which includes $500 and a distinctive trophy.  The project of the year will receive a meticulous, miniature scale model of Dankmar Adler and Louis Sullivan’s Chicago Stock Exchange Trading Room; other honorees will receive areplicaofaterra cotta spandrel panel from the Western Methodist Book Concern  in the collection the Art Institute of Chicago designed by Harry Wheelock, c. 1899.

Other award winners around the state are:

About the Awards.
Since 1994 Landmarks Illinois has been aided by a generous grant from the Richard H. Driehaus Foundation to honor those whose work demonstrates a commitment to excellence in historic preservation.

This year’s awards jury is

The awards ceremony, which includes cocktails and appetizers, will be held Saturday, Oct. 17 at Venue One, 1034 W. Randolph, and is open to the public. The program begins with a panel discussion at 3 p.m.followed by the awards presentation at 4:30 p.m. and a cocktail reception at 6 p.m.   Tickets are available at $40 for members and $50 for non-members. To make a reservation go to landmarks.org/awards.htm or contact Landmarks Illinois at 312-922-1742.