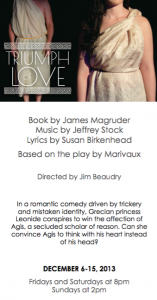 The Music Theatre Company (TMTC), Highland Park’s critically-acclaimed Equity theatre, is pleased to announce the full casting for Triumph of Love, the first Chamber Musical of their 2013-14 Season. Triumph of Love runs December 6 – 15, 2013.

In a romantic comedy driven by trickery and mistaken identity, Grecian princess Leonide conspires to win the affection of Agis, a secluded scholar of reason. Can she convince Agis to think with his heart instead of his head? Triumph of Love is based on the 1732 Marivaux play Le Triophe de l’Amour and features music by Jeffrey Stock with lyrics by Susan Birkenhead, and a book written by James Magruder.

Musicals in TMTC’s Chamber Musicals Series are often rare or little seen titles – performed in a concert setting, these presentations feature live music, some of Chicago’s finest performers, and the full musical in its entirety.

Tickets are on sale now! To purchase tickets or for more information call The Music Theatre Company at 847.579.4900 (Box Office hours: 10am-6pm Monday-Friday) or visitwww.themusictheatrecompany.org. Located at 1850 Green Bay Road in Highland Park, The Music Theatre Company explores the musical in the interest of expanding the canon of musical theatre through fully-staged productions, commissions of new works, and musical experiments.

Kory Danielson (Music Director) returns to The Music Theatre Company where he music directed their past three 48 Hour Musicals, Lucky Stiff in Concert, and two Young Artists’ Program productions including Zanna, Don’t! Most recently, Kory served as the resident Music Director for Haven Theatre’s inaugural season which included Hedwig and the Angry Inch and The Wedding Singer. He was also the conductor/pianist for Smokey Joe’s Cafe at the Royal George Theatre, and has served as Assistant Music Director under Roberta Duchak for Xanadu and Singin’ in the Rain at Drury Lane Oakbrook. Kory also served as music director for Street Tempo Theatre’s first season which includedLittle Shop of Horrors and Let My People Come. He has also worked with Chicago Children’s Theatre, Bailiwick Chicago, National Pastime Theatre, and with Hell in a Handbag Productions (Trogg, Poseidon, Rudolph the Red-Hosed Reindeer). Kory studied Musical Theatre Performance at Columbia College Chicago.

Bill Chamberlain (Hermocrates) last appeared with The Music Theatre Company as the Priest in The Baker’s Wife in Concert. Recently, Bill played the Padre in Man of La Mancha with Light Opera Works and Roscoe in Chicago Shakespeare Theatre’s production of Follies. In January, he will be appearing as George Bernard Shaw in Mr. Shaw Goes to Hollywood at the Greenhouse Theater Center.

Katherine L. Condit (Hesione). Credits include: Original Broadway Cast of Chess; Grizabella in the Vienna/Zurich Companies of CATS; Val in the National Tour of A Chorus Line and The Narrator in the Canadian/US tour of Joseph and the Amazing Technicolor Dreamcoat with Donny Osmond. Other credits include: Norma Desmond in Sunset Boulevard at Timber Lake Playhouse, Cleopatra in Anthony and Cleopatra with Shakespeare Project, Aurora/Spider Woman in Kiss of the Spider Woman and Arlene in Baby at Stage 773. Katherine also co-founded Cobalt Ensemble Theatre (C.E.T.) in Chicago that enjoyed a Jeff citation-winning five year lifespan. Directing credits include: Dream of a Common Language by Heather McDonald and The Architect by David Greig (C.E.T.); Feeding the Moonfish (Artistic Home) and Cowboy Versus Samurai (Silk Road Rising).

Garrett Lutz (Dimas) is a graduate of North Central College where he received his BA in Musical Theatre. He was last seen in The Wedding Singer at Haven Theatre and Collaboraction’s 13th Annual Sketchbook Festival in Shuffle Off, directed by Danny Bernardo. Currently he is a part of #OMFG and F-gg*t, new plays in development, and will take part in American Theater Company’s HAIR in March.

Meghan Murphy (Corine) last performed at The Music Theatre Company in The 48 Hour Musicals: Forget me not. Meghan can be seen singing in a variety of Chicago venues including: Ravinia, The Metro (Alien Queen), Mayne Stage (Chicago Sings, and others), at the Chicago Humanities Festival), McCormick Place, Center on Halsted, Davenport’s and Mary’s Attic. Favorite theatre credits include: From Doo Wop to Hip Hop (Black Ensemble Theatre, Chicago), HAIR (Arizona Theatre Company), Chicago, The World Goes ’Round, Smokey Joe’s Cafe (Norwegian Cruise Line). She writes, performs and directs her own one-woman show every second Thursday of the month at Mary’s Attic called Big Red’s Cabaret, and is the lead singer of her soul band, Everybody Says Yes. EverybodySaysYes.com.

Eizabeth Telford (Princess Leonide). A native of Georgia, Elizabeth graduated with a BFA in Musical Theatre from Shorter University. She has previously worked with the Milwaukee Repertory Theatre as an acting intern in the 2011-2012 season, Skylight Music Theatre as Maria in The Sound of Music, and at First Stage in Shrek the Musical, and with the Utah Shakespeare Festival in Anything Goes, Love’s Labour’s Lost, Les Misérables, and the Educational Tour of Romeo and Juliet.

Tagged with The Music Theatre Company