Broadway In Chicago is thrilled to announce that DEE SNIDER’S ROCK & ROLL CHRISTMAS TALE, starring and written by iconic rocker Dee Snider, directed by Adam John Hunter and produced by John B. Yonover, will play the Broadway Playhouse at Water Tower Place (175 E Chestnut) Nov. 4, 2014 through Jan. 4, 2015.  DEE SNIDER’S ROCK & ROLL CHRISTMAS TALE will be part of the Broadway In Chicago 2014 Fall Season.

DEE SNIDER’S ROCK & ROLL CHRISTMAS TALE tells the story of Däisy Cütter, a heavy metal bar band looking to make it big even though the 80s are LONG over.  This year, these four guys are ready to take the ultimate step and, in mythic rock tradition, sell their souls to the devil in exchange for success beyond their wildest metal dreams!  But every time they try to seal the infernal pact, their head-banging anthems turn into warm-hearted carols.  Soon these rockers are forced to realize their dreams of stardom are no match for the Christmas spirit. Dee Snider, infamous lead singer of Twisted Sister, has created a VERY funny, VERY rocking and (sshhh!) VERY sweet new holiday musical, guaranteed to rock your whole family’s holiday and twist your Christmas.

Further casting and other details will be announced at a later date. 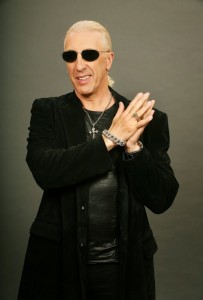 In tandem with this announcement, legendary rock icon Dee Snider will soon release one of the new titles from ROCK & ROLL CHRISTMAS TALE, Silent Night, sung with television personality Giuliana Rancic. This electrifying reinterpretation of a holiday classic from Snider’s new musical production marks Giuliana’s singing debut and a portion of the proceeds from all digital download sales will support her charity, Fab-U-Wish.  This foundation grants fabulous themed wishes to women undergoing treatment for breast and ovarian cancer.  Enjoy this special musical collaboration and, in return, make someone’s holiday merrier and brighter!

Dee Snider is best known as the lead vocalist and front man for legendary rock/metal band Twisted Sister.  The band has released six studio albums, six live albums and their hugely successful 2006 holiday record, A Twisted Christmas (Razor & Tie).  1984’s Stay Hungry produced the classic singles “We’re Not Gonna Take It” and “I Wanna Rock.”  Dee Snider has been a mainstay in pop culture, appearing as a commentator on several VH1 productions, as well as his own A&E reality show “Growing Up Twisted” and ABC’s “Celebrity Wife Swap.” As a “Celebrity Apprentice” alumnus, Dee was one of the few chosen to appear on the “All-Star Celebrity Apprentice.”  Snider also starred as Dennis Dupree in a three month run in the Broadway hit Rock Of Ages.  Dee also has his own nationally syndicated radio show “House Of Hair,” which airs on more than 200 stations in North America.

Adam John Hunter has been working with Dee Snider on the development of this exciting new Christmas musical from the get go. Adam was the Associate Director on the Tony-nominated musicals Rock of Ages, Company, and A Catered Affair, as well as Road Show at The Public Theater and the recent critically-acclaimed Passion at Classic Stage Company.  Adam has also been the Production Stage Manager on half a dozen Broadway shows.

John B. Yonover has supported and invested in over 25 productions on Broadway, Chicago and London’s West End, including Memphis, Hair, Enron, Addams Family, Come Fly Away, The People In The Picture, Lombardi, Dead Accounts, The Performers, Catch Me If You Can, The Mountaintop, The Motherfucker With The Hat, Chinglish, Ghost The Musical and To Master The Art. John was an Associate Producer on Memphis the US Tour and appeared as a guest judge on one episode for Donald Trump’s “Apprentice” alongside Daryl Roth and Kristen Chenoweth.  John is currently an Associate Producer on the new Broadway musical, First Date and Co-Producer on the stage adaptation of John Grisham’s A Time To Kill.