Fair warning, First Floor Theater’s Polaroid Stories is not an easy show to sit through.  Namomi Iizuka’s play recounts recorded conversations she had more than sixteen years ago now with the homeless, the addicted and those whose lives seem to be meant for a purpose none of us can determine.

As the title details, these are merely snippets into the lives of people whom we truly never get to know and for most part, do not want to know us.  It is in this realm that this particular production excels.

Under the precise direction of Hutch Pimentel (who also serves as FFT’s Artistic Producer), Polaroid Stories molds together two different mediums to tell their tales. Ovid’s epic Metamorphoses fuses beautifully with modern day rhyme and meter to give us a seamlessly, emotionally tense and gratifying work of performance art (and make no mistake, this is performance art of the highest order). 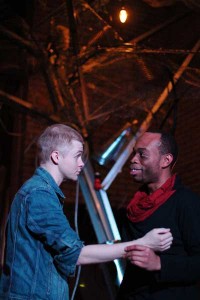 Pimentel’s staging is theater of the real, as the interior space is surrounded by the outside world.  This forum allows the actors to move around without the barriers of a proscenium which would do this show a disservice . Instead fence remnants, ladders, discarded mirrors and construction materials are as relevant to the story as  cast.    And what a cast it is!

Each ‘Polaroid” scene forces these actors to go into places that are immensely dark and foreboding.  Though all are up to this task, there are three standouts; Shariba Rivers, Luke Michael Grimes and Andrew Cutler who each hypnotically bring you into their world without the audience member knowing how or why they are doing it.

Ms. Rivers (Persephone/Semele) is instantly engaging and a powerhouse in her subtle manipulations trying to get a fix.  In one scene, she tosses the word “love” around where each time she says it, or it is mentioned to her, it takes on a dimension all its own. That one scene alone shows  the hell of ‘love’ through an addict’s mindset.

Andrew Cutler (Skinheadboy) is at one moment sexually potent in his blond boy innocence, which this actor can then turn on a dime into a vicious, narcissistic addict who can just as easily kill you as kiss you.  Frickin’ brilliant!!

Then there is Luke Michael Grimes, whose Narcissus is the most well developed of all the characters in the play. He is a 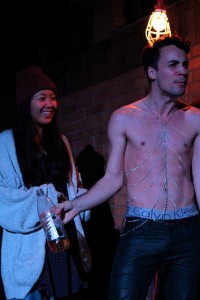 boy-toy prostitute who goes through sugar daddy after sugar daddy with the end goal of obtaining, well, everything.   He is brought up on the streets after being tossed out by his mother (literally) and even with all the emotional pain that is his life, Narcissus has ‘Quixotesque’ dreams.  The spot-on performance of Mr. Grimes weaves through his character’s difficult monologues effortlessly as actor and character become one and his truth (or non-truth) is revealed.

The characters in Polaroid Stories may seem un-relatable to the audience but I assure you, it is the opposite.  They are all very relatable and it is the audience member who winds putting up a barrier because there is a bit of each one of us in those characters and it is uncomfortable for us to admit it.   Theatre shouldn’t always make us feel warm and fuzzy.  In fact the most important theatre makes us feel uneasy because it is then that we learn most about ourselves.