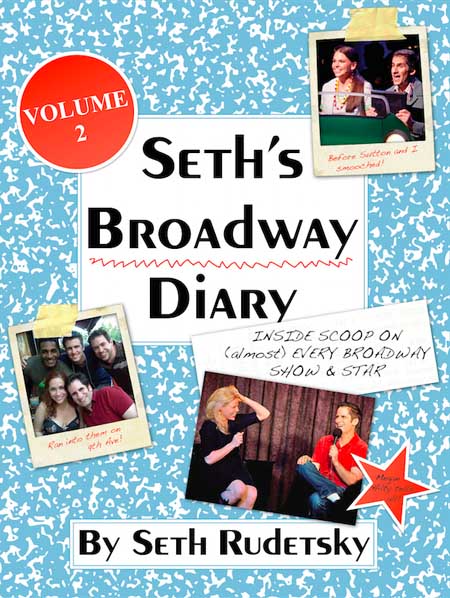 DRESS CIRCLE PUBLISHING will release SETH’S BROADWAY DIARY, VOLUME 2: The Inside Scoop on (almost) Every Broadway Show & Star, the second in a series by Sirius XM radio host SETH RUDETSKY on Tuesday, October 27. To pre-order the book, please visit www.dresscirclepublishing.com.

“Seth’s hysterically funny diary lets the reader be a fly on the wall for offstage encounters with the biggest names on Broadway,” says publisher Brisa Trinchero. “It’s riveting to know what these theater luminaries are like in real life and to hear the shocking, sweet, and often unexpected things going on behind the scenes at your favorite Broadway shows.”

SETH RUDETSKY is a 21st century renaissance man – renowned radio host, actor, comedian, librettist, music director, pianist, conductor, producer and author.  Nationally known as the host of “Seth Speaks” and “Seth’s Big Fat Broadway” on Sirius XM radio Seth has worked as the music director, pianist or conductor for some of Broadway’s biggest stars: Patti LuPone, Betty Buckley, Andrea Martin, Brian Stokes Mitchell, Megan Mullally, Kristin Chenoweth, Neil Patrick Harris, Matthew Broderick and Christine Ebersole, Hilty to name a few. In addition he’s spent years as a pianist on Broadway playing such shows as Les Miserables, The Producers, Phantom of The Opera, Grease and Ragtime.  All of this experience on the Great White Way has led him to publish several books on the topic including The Q Guide to Broadway and Broadway Nights.

As an actor, he played Sheldon in The Ritz on Broadway with Rosie Perez and starred opposite Sutton Foster in a one-night concert of They’re Playing Our Song for the Actors Fund.  He’s even had several TV roles on “All My Children,” “Law and Order: C.I.,” and played himself on “Cash Cab,” MTV’s “Made,”  “Legally Blonde: The Search for the Next Elle Woods,” the Emmy-Award-winning “Kathy Griffin: My Life on the D-List” on Bravo, NBC’s “Smash” and ABC’s “Bunheads.”  As a comic, he won the title “Funniest Gay Male in NY” at Stand-Up NY and he and co-author Jack Plotnick had a long-running show at Caroline’s Comedy Club in New York City.  On television, Seth spent two years as a comedy writer on “The Rosie O’Donnell Show” for which he was nominated for three Emmy Awards. He also wrote for the TV Shows “Caroline in the City,” The 1999 Grammy Awards, and created the opening number for the 1998 and 2000 Tony Awards.

Currently, he has his own reality show on www.SethTV.com that features talk shows and exclusive concerts with Patti LuPone, Audra McDonald, Megan Mullally and Sutton Foster. In 2013, Disaster, a 1970’s disaster movie musical (written by Seth and Jack Plotnick) opened Off-Broadway to critical acclaim and is slated for a Broadway transfer in 2015.

His novel My Awesome/Awful Popularity Plan and the recent sequel The Rise and Fall of a Theater Geek were both published by Random House and his audio books on Audible.com feature Josh Gad, Jesse Tyler Ferguson and Jonathan Groff and more! You can watch all of Seth’s videos on www.SethRudetsky.com.

BRISA TRINCHERO, a two-time Tony Award-winning Broadway producer, is thrilled to be combining her love of theater and books through Dress Circle Publishing. Her theatrical endeavors include over 18 Broadway shows including Beautiful: The Carole King Musical, Pippin, The Gershwins’ Porgy & Bess, and others. A lifelong entrepreneur, Brisa is an active strategic advisor to several tech and live entertainment start-ups. She serves as a creative development and fundraising strategists for individuals and organizations. In 2013, she was named a “Top 40 Under 40 Business Leader.” Brisa has a degree in music, an MBA in finance and is a graduate of the Commercial Theatre Institute.

ROBERTA PEREIRA is the Producing Director of The Playwrights Realm, an Off-Broadway theater company devoted to supporting early career playwrights. Previously, she was a Producer at Bisno Productions, where she developed and produced plays, musicals and event theatre on Broadway, Off Broadway, regionally, in the West End, and on tour. Select productions include: A Red Orchid Theaters Off-Broadway premiere of The Opponent; Tony-nominated play Mothers & Sons by Terrence McNally, starring Tyne Daly; the revival of the beloved musical Annie; the Olivier award-winning revival of Stephen Sondheim’s Merrily We Roll Along in the West End; the revival of Peter Nichol’s Passion Play starring Zoe Wanamaker in the West End; the Broadway premiere of Grace, starring Paul Rudd, Michael Shannon and Ed Asner; and the Tony Award Winning smash hit War Horse (Broadway, Toronto and US tour). A graduate of Yale School of Drama’s Theater Management program, Roberta is originally from Brazil and currently lives in New York City.