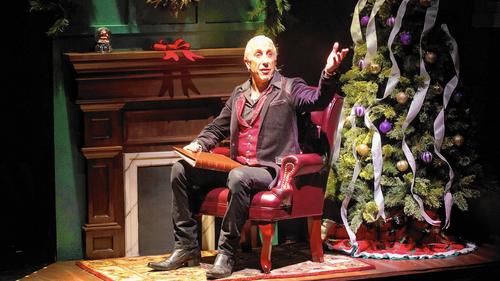 “You bring the wife and the Kids into town for some deep-dish pizza, and Christmas cheer, and run smack dab into a satanic ritual.” This sums the show up perfectly, yet doesn’t do it justice all at once.

In the entertainment industry Christmas is a hard nut to crack, though new Movies, TV Specials, Albums inundate us year, after year. We tend to fall back on tradition, to watch those movie we did as kids, listen to the same singers. Though the contemporary pop stars may be singing the same tunes as did Judy Garland, and Gene Autry, Irving Berlin we tend to fall back on these valued chestnuts. We watch ‘White Christmas’, ‘A Miracle on 34th Street’, Jimmie Stewart running down the street screaming “Merry Christmas”. Bad 70’s Claymation plays on the TV screens around the world, as a letter carrier tells us again, and again, the tales of Rudolph and Frosty, and the year there almost wasn’t a Christmas, Obi Wan Kenobi as Jacob Marley in Albert Finney’s Scrooge, Frankenstein’s Monster narrates a story about a Grinch who stole Christmas from a town of Who’s, (That’s right Google it. The Grinch Who stole Christmas, Narrator, Got it? Yup Karloff, The Frankenstein, monster. ) Sure, they have remade the Grinch, sure they have bedecked Santa’s halls over and over and over again, but we always come back to the traditional, Christmas is about tradition. Very, VERY, rarely a new one joins the Cannon of Classics, ‘A Christmas Story’ in the 80’s, Bill Murray’s ‘Scrooged’, ‘Christmas Vacation’, ‘A Muppet Christmas Carol, and maybe, time will tell, The Polar Express. One hand, in my entire life time I can count additions to the Christmas Classic Cannon on one hand. Dee Snider’s Rock and Roll Christmas, is now in contention, I may in fact have to use my second hand. It was just that METAL.

Dee Snider, of the famed 80’s band ‘Twisted Sister’ whose hits include,   “I Wanna Rock,” “Burn in Hell,” and of course the power anthem, “We’re Not Gonna Take it,” who has also written and stared in the 1998 film, ‘Strange Land’ which if you haven’t seen, is worth a look; Hellraiser meets, Silence of the Lambs, very good. How, then, when he is so metal, will he approach a Christmas Tale? Is it even possible? How is it then that I am so willing to say this is the next great Christmas Classic. Snider has written Perhaps the greatest Christmas show of the century, thus far. How? He kept it simple. The Story line is in fact so simple, I kept being taken back to the old Claymation, Rudolph and Frosty, kids shows, simple stories that are beloved by us even as adults. Snider could easily have his Rock and Roll Christmas Tale done up in the same Claymation style and it would fit seamlessly into the rotation. Well, except the music would, you know, ROCK!!!

Snider, who it can be said truly has a rock legends command of the hollowed planks, while maintaining an honest manner of humor and self-mockery, In the tradition of “This is Spinal Tap,” plays the narrator in the vein of a Christmas Carol he sits for most of the play surrounded Christmas regalia, reading this classic from a book. (Apparently no amount of pink spandex, and hair spray, nor chewing on a cow bone, can drive the ability to read from him.Yes, Mr. Snider we remember.) He also later plays the Exorcist, in one of the shows best scenes where in the band is trying in vain to exorcise the horrid Christmas Spirit from themselves, “You want the Christmas Spirit ripped from your immortal souls?” – “YES!!!” The show is bursting at the seams with this type of sucker punching humor, I was in stitches. You will be too: better be or Snider may come into the audience and chew your funny bone too. ()

As stated, the story is simple, an aging rock band, ‘Daisy Cutter’, misspelled Daisy Cuter throughout the show, (Their lack of spelling skills is important folk, I won’t say why, spoilers.). Is struggling to keep the dream of spandex, drugs and Rock and Roll alive even though their particular form of music has been dead for decades. Playing to empty clubs can only last so long, they are informed that if by Christmas Eve they do not start pulling a crowd they will no longer have a stage to play. In a panic and to prove their dedication to Metal, horns up folks, they quickly write a contract to Satan, and seal it in blood, our immortal souls for fame and fortune, and everything that goes with it. This is where the story kicks in, full force. The show does drag a little up until this point, I was in fact composing a bad review up until this point,   but the wait becomes worth it. The very next night as they are rocking out to an empty hall their music changes uncontrollably into a Christmas Song. Let me tell you there is nothing Metal about Christmas, or is there? The club girls, start recording their shows, and posting them to the interweb. The videos start blowing up, which is old school talk for going viral. The crowds start pouring into see Daisy Cuter. fame is achieve. The members of the band cannot believe it Tank, Jonny, and Ralph, played by Tommy Hahn, Dan Peters, and William Tarris, respectively start living the moment, loving the fame. However, D.D. the lead singer played by Adam Michaels, cannot except it, it enrages him that their fame is coming from something as unMetal, as Christmas. He rages against, exactly that for which he sold his soul, to the point where he kills an inflated Frosty the Snowman on stage, as the band is rocking out on a Christmas carol. Still he remains unable to stop the Christmas spirit from possessing the rest of his band.

Two members of the cast deserve special note. William Tarris, as Ralph Really does steal the show with his shy, innocent humor; though I must say that his romance with Suzette (The club manager; played by Keely Vasquez) does seem a little bit off subject and forced upon the show, “because we need a romance.” He does an amazing job, pulling what could be the weakest point of the show up to a level, where we are willing to accept the needless romance, in exchange for his nerd-lisious awkwardness. Full Disclosure; if his Rudolph bit had gone on much longer, I may have died laughing. 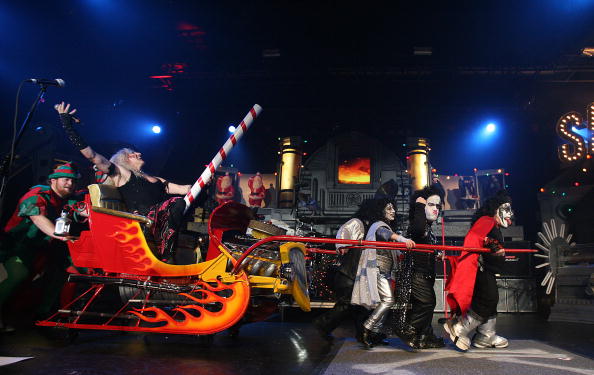 The second actor I truly must call out, Bill McGough, who plays the club’s in house ex rocker, drunk, goes by the name of scratch, (the type of dude that looking at him you assume he was a roadie for Motley Crew, or heck, Twisted Sister), becomes the “Yoda” of the story inspiring the band to sell their souls or be forgotten forever. McGough has this incredible sense of timing that cannot be ignored – he punches you in the face with laughter, with a simple hand gesture, and right when you don’t think it possible to laugh any more he hits you again. While he doesn’t appear on the stage as often as the rest of the cast, when he hits the planks, he is the one you are watching. This is not to say that the rest of the cast doesn’t deserve the fullest of ovations, at all. The entire ensemble deserves praise.

The music, was great and every one on stage who you see holding an instrument is playing it. Yes, before you ask they do break out all three of the aforementioned ‘Twisted Sister’ hits. I have great respect for Adam Micheals vocals, they are dead on, he nails every note. I cannot imagine the pressure of having to belt out “Burn in Hell” in front of the Bone Chewing, Pink Eye Shadowed, Man himself (*Still remember.) The music however is actually a weak point in the show. Shocked? The Christmas Carols are amazing when your hear them. Hearing a Metal band belt out, ‘Have Your Self a Merry Little Christmas,’ my favorite of the show is insane and awe inspiring. However, there are fewer Christmas songs then you expect, in a show called “A Rock and Roll Christmas Tale”. There are a few original compositions, which carry the story, and that is fine. Yes they break out, into Christmas Carols quite a bit. I kept waiting though for more Christmas Carols, and while they were salted through the show there weren’t enough. Not nearly. Perhaps it is just that I so enjoyed when they did break them out, I wanted more, and I feel many in the audience will as well! For instance at the end, No spoilers, they busted out ‘I Wanna Rock,’ where they could have busted out “Up on the House Top, click, click, click.” When you go you will be hoping to hear your favorite Christmas songs, translated to Metal Cords, don’t be disappointed if you don’t hear that particular one.

“It is okay to want, Just don’t overlook the gifts you already have.”

The experience that Dee Snider, has created here is one that should be cherished through the ages! And I feel will be. Especially if he turns it into a Claymation TV Special, it’s a perfect fit. Just saying, dude. Horns up!