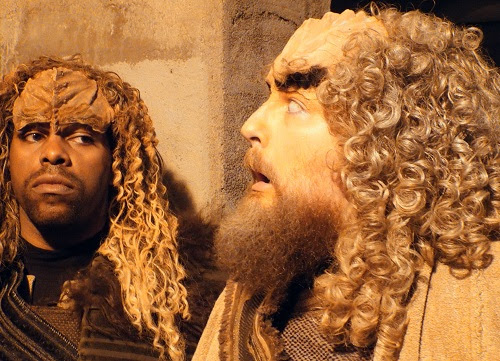 Commedia Beauregard’s adaptation of Dickens’ A Christmas Carol, performed entirely in tlhIngan Hol (the Klingon language originally created for the Star Trek TV series and feature films), will return with a new director, new cast members and move to a new venue for its fifth and final seasonal Chicago production in December 2014. Catie O’ Donnell, a Madison, Wisconsin based director, will bring her experience in opera and theater to Christopher Kidder-Mostrom and Sasha Warren’s adaptation of the Dickens’ favorite. O’Donnell says her background staging operas sung in foreign languages will be an asset in telling this story in the language of Star Trek’s notorious warrior people. “When working in another language,” she says, “it’s essential to tell the story visually. Even though we’ll have supertitles, the actors’ movement will be critical in showing how Klingons think and act.”

A Klingon Christmas Carol takes Scrooge to the Klingons’ home planet of Qo’noS (pronounced Kronos). Scrooge, or more precisely SQuja’ (pronounced Scroo-jah) is shown to be without honor or courage when the three ghosts arrive to help him become the warrior he ought to be in time to save Tiny Tim from a terrible fate. The production will be staged for the first time at the Athenaeum Theatre, in that venue’s 81-seat Studio Two. “The new venue will allow us to add set decoration like wall paintings to create an environmental production, taking our audiences more fully to the planet Qo’noS.” Several new puppets are being created to join the elaborate makeup and masks needed to emulate the ridged foreheads, and snaggled and prominent teeth of the Klingon race.
While the specifics of the plot will vary from Dickens in those respects, O’Donnell says the story of A Christmas Carol is universal and can transfer to other planets. “Though the characters aren’t observing a holiday called Christmas, they’re experiencing the same type of celebration. The message here is the same as in Dickens – to live your life to the fullest and share what you have with others.”

Though a Star Trek fan since birth, O’Donnell is not fluent in the language of the Klingons and says she’ll be attending the language classes with her cast that will be the first stage of the rehearsal process. “It’s so essential to understand the nuances of a text’s language,” O’Donnell explains. “The actors have to be able to deliver the lines so that the audience can tell when characters are joking, or when they’re angry, for example. Supertitles alone won’t deliver those extra shadings.”

Phil Zimmerman, who has played the Ghost of Kahless Past in previous productions of A Klingon Christmas Carol and will move up to the role of SQuja’ this year, says viewing some of the Star Trek feature films is good preparation for performing the show as well. “Christopher Lloyd speaks the language a lot in Star Trek III – The Search for Spock.”

A Klingon Christmas Carol has routinely become one of the hottest tickets of the Chicago holiday theater season, with nearly all performances selling out, due to its popularity among Star Trek fans and the general theater-going public alike. The play was first performed by Commedia Beauregard as a one night only benefit in St. Paul, Minnesota in 2007. It was remounted in the Twin Cities again each holiday season from 2008-2010. In 2010, after Kidder-Mostrom moved himself and Commedia Beauregard to Chicago, A Klingon Christmas Carol began what would become a five-year run in the Windy City. It was produced in 2013 in Cincinnati and a Washington DC production will be mounted this year.

LISTING INFORMATION
A Klingon Christmas Carol
By Christopher Kidder-Mostrom & Sasha Warren, Translated by: Chris Lipscombe
Originally Translated by: Laura Thurston, Bill Hedrick, and Christopher Kidder-Mostrom
Lyrics to qu’wI’ by: Terrence Donnelly
Directed by Catie O’Donnell
Thursday, December 4 – Sunday, December 21, 2014
Athenaeum Theatre, Studio Two, 2936 N. Southport Ave., Chicago
Preview performance Thursday, December 4 (all seats $20)
Regular run Friday, December 5 – Sunday, December 21 (General admission $32, Students and Seniors 65+ $28, All seats for Saturday Late Night performances at 10:30 pm are $20). Performances are Thursdays and Fridays at 8 pm, Saturdays at 8 and 10:30 pm, and Sundays at 3:30 pm.
More info at www.cbtheatre.org . Tickets available at www.athenaeumtheatre.org or 773-935-6875
ABOUT COMMEDIA BEAUREGARD
Founded in Saint Paul, Minnesota in 2000, but based in Chicago since early 2011, Commedia Beauregard has a mission of performing translated works and their 3-point ideal is “Interpret. Understand. Perform.” Over the years, the company has performed works derived from Polish, Spanish, Czech, German, Russian, and French as well as tlhIngan Hol (the Klingon language). The company has performed in Chicago at the Greenhouse Theatre Center, Gorilla Tango, the Raven Theatre West Stage, and now at the Athenaeum.