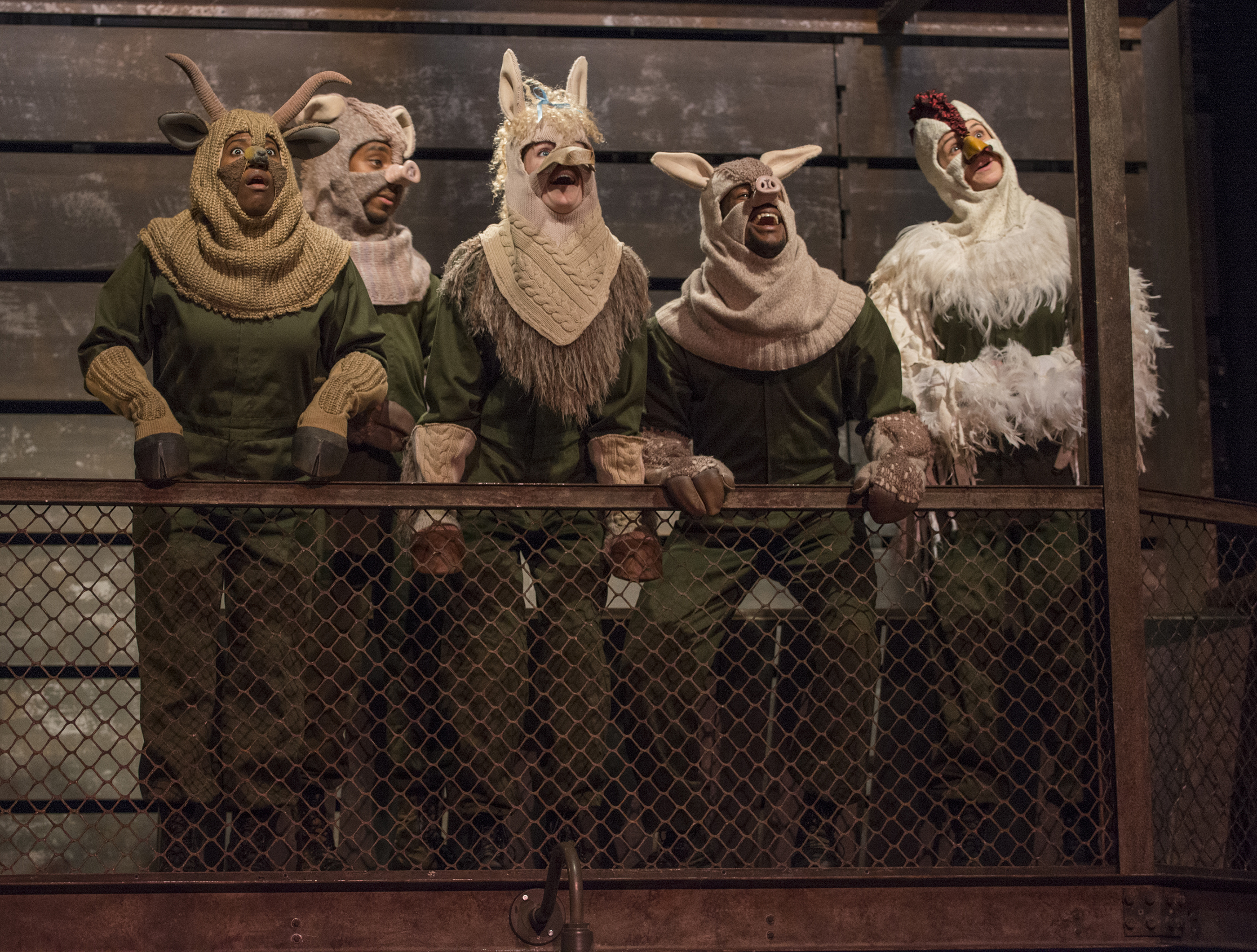 George Orwell’s revolutionary masterpiece comes to the stage with Steppenwolf for Young Adults’ world premiere adaptation of Animal Farm. After revolting against the reign of their negligent human master, the animals of Mr. Jones’s farm create their own ideal society in which all animals are equal and rules are set by democratic vote. It’s all working pretty well until the allure of power leads the animals to a chilling fate. Animal Farm illustrates how new tyranny replaces old and power corrupts even the noblest of causes.

The cast features Will Allan as Benjamin; Jasmine Bracey as Julia and Old Major; Lucy Carapetyan as Maggie;Amelia Hefferon as Squealer; Matt Kahler as Boxer; Mildred Marie Langford as Muriel; Blake Montgomery as Napoleon; Dana Murphy as Mollie; Lance Newton as Pinkeye and Moses; and Sean Parris as Snowball.

Tickets to public performances of Animal Farm ($20) are on sale now through Audience Services (1650 N Halsted St), 312-335-1650 and steppenwolf.org. Student Discounts: a limited number of $15 student tickets are available through Audience Services (1650 N Halsted St) or by calling 312-335-1650. Must present a valid student ID for each ticket. Public performances are scheduled Friday at 7:30pm, Saturday at 3pm and 7:30pm and Sunday at 3pm. Adult Groups: all groups of 10 or more receive a discounted rate for any performance throughout the season. For additional information, visit steppenwolf.org/groups. School Performances occur Tuesday through Friday at 10am and are reserved for school groups only. School performances have sold out; however, a waiting list is available. Contact Education and Community Programs Coordinator Lauren Sivak at 312-654-5643.

The SYA 2014/15 season explores the theme, “Create a Movement: The Art of Revolution.” Following Animal Farm, SYA presents the world premiere of This Is Modern Art (based on true events) written by acclaimed playwright Idris Goodwin and Louder Than a Bomb founder Kevin Coval and directed by Lisa Portes. This Is Modern Art gives a glimpse into the lives of anonymous graffiti artists and asks us to question the true purpose of art. The show runs February 25 – March 14, 2015 in the Downstairs Theatre. Single tickets will go on sale at a later date.

Allstate is the Leading Corporate Season Production Sponsor of Steppenwolf for Young Adults.

Major foundation support for Steppenwolf for Young Adults is provided by the Polk Bros. Foundation and the Alphawood Foundation.

development workshops for educators; and the Young Adult Council, an innovative year-round after-school initiative that uniquely engages high school students in all areas of the theater’s operations.

Steppenwolf Theatre Company is America’s longest standing, most distinguished ensemble theater, producing nearly 700 performances and events annually in its three Chicago theater spaces—the 515-seat Downstairs Theatre, the 299-seat Upstairs Theatre and the 80-seat Garage Theatre. Formed in 1976 by a collective of actors, Steppenwolf has grown into an ensemble of 44 actors, writers and directors. Artistic programming at Steppenwolf includes a five-play Subscription Season, a two-play Steppenwolf for Young Adults season and two repertory series: First Look Repertory of New Work and Garage Rep. While firmly grounded in the Chicago community, nearly 40 original Steppenwolf productions have enjoyed success both nationally and internationally, including Off-Broadway, Broadway, London, Sydney, Galway and Dublin. Steppenwolf has the distinction of being the only theater to receive the National Medal of Arts, in addition to numerous other prestigious honors including an Illinois Arts Legend Award and 12 Tony Awards. Martha Lavey is the Artistic Director and David Hawkanson is the Executive Director. Nora Daley is the Chair of Steppenwolf’s Board of Trustees. For additional information, visit steppenwolf.org, facebook.com/steppenwolftheatre and twitter.com/steppenwolfthtr.