“50 SHADES! THE MUSICAL,” THE HILARIOUS PARODY OF THE “FIFTY SHADES” TRILOGY, TO PLAY THE HOUSE OF BLUES MAY 2 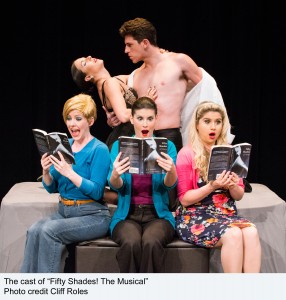 50 SHADES! THE MUSICAL,” the original, critically-hailed parody of the phenomenally popular books, is taking its whips, feather dusters and outrageous laughs on a tour of North America. The show will play the House of Blues Chicago, 329 N Dearborn St, Thursday, May 2 at 7 p.m.

“50 SHADES! THE MUSICAL” opens with a trio of girlfriends setting aside staid book club fare in favor of a sexier sort of page-turner. Interest piqued, they devour the novel while the characters’ delicious affair comes to life before their eyes. The musical is an uproarious rollercoaster ride through this unlikely bestseller, performed by a talented cast of nine and a rocking live band. The show features a sassy original score with musical influences ranging from traditional musical theater to R&B, including the provocative “They Get Nasty,” “I Don’t Make Love…” and “There’s a Hole Inside of Me.”

“Rather than simply putting the plot of the books on stage, we wanted to explore the craze that has arisen surrounding them,” says Producer/Writer Emily Dorezas. “With our strong backgrounds in developing comedy through collaborative Chicago-style improvisation, it was important for us to create a piece that can stand on its own – regardless of any particular person’s familiarity with the novels. It was also critical that our score feature all-new music – this gives us an opportunity to put our own playful spin on these characters and do something completely fresh that audiences seem to genuinely love.”

The torrid relationship of Christian Grey and Anastasia Steele has become an international sensation since the first book debuted in 2011, inspiring widespread fervor among readers, including many who perhaps found themselves slightly surprised to be so riveted by Ana and Christian’s escapades. These passion-fueled characters have now leapt from the page to the stage and beyond. More than 32 million copies of the books have been sold and a Universal Studios film adaptation of the books is currently in development.

“50 SHADES! THE MUSICAL” has garnered raves from an array of fans and media. Celebrity blogger and television personality Perez Hilton called it “HIGHlariously Hawt! (sic) Absolutely perfect!,” Time Magazine praised the show as “A play your inner goddess, your book club and your mother-in-law can all agree on!” Raleigh’s Triangle Arts and Entertainment summed it up, saying “The audience may turn Fifty Shades of Red at the scandalous goings-on onstage, but they won’t stop laughing until long after the musical ends.”

Like the book series, “50 SHADES! THE MUSICAL” is not intended for those under the age of 18. For more information, please visit www.50ShadesMusical.com.