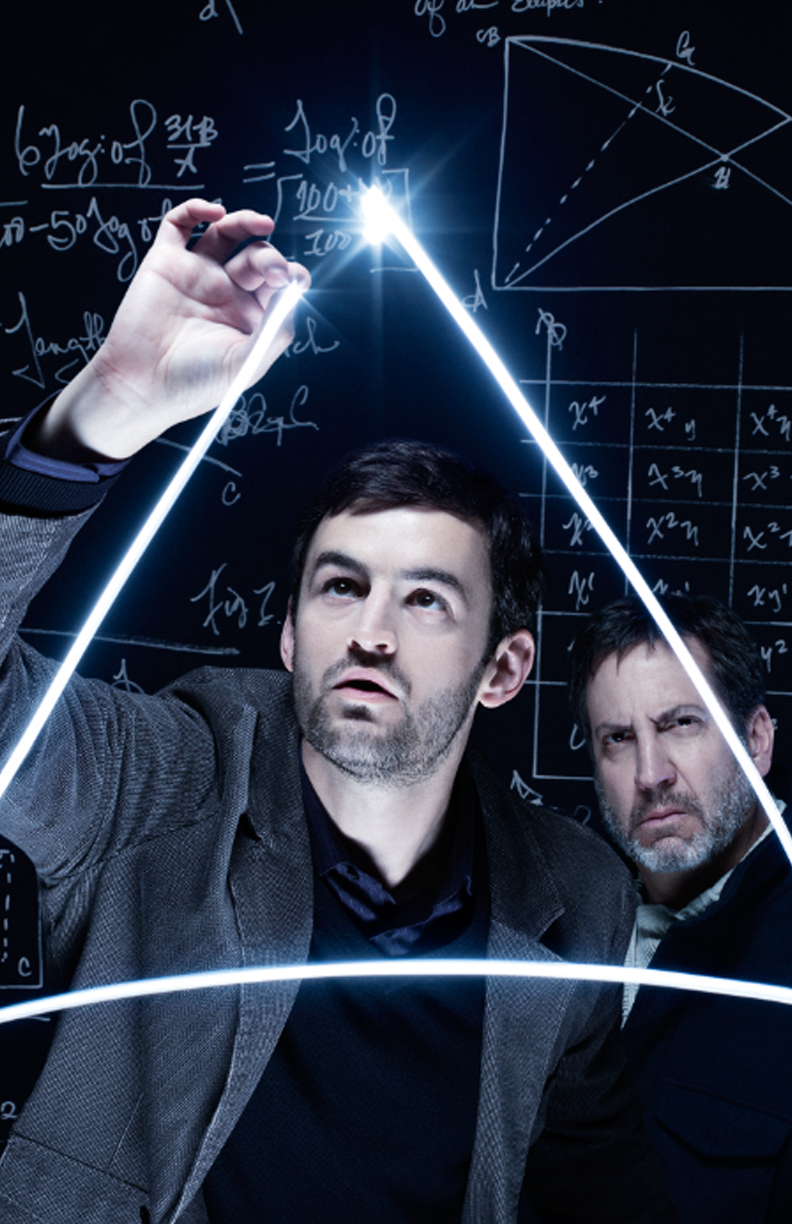 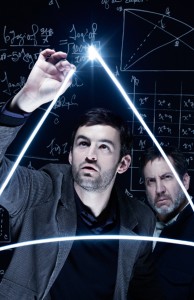 Plays about historical figures often play fast and loose with facts. In Isaac’s Eye, however, an ingenious, meta-theatrical device separates truth from fiction, as each incontrovertible fact is chalked onto the very walls of the theatre!

Such is the inspired atmosphere of Lucas Hnath’s wildly creative new play, which tells the story of a young Isaac Newton, who once inserted a long needle “between my eye and the bone, as near to the backside of my eye as I could.”

Hnath playfully reimagines Newton’s world with a contemporary conceit and language—stripped of accents and period dialect—as he introduces young Newton to the great Robert Hooke, the most famous and powerful scientist in Britain. The resulting battle of intellects and egos pulses with wit, humor and tension as the playwright uncovers (and invents) the motivations that drove a young farm boy to become one of the greatest thinkers in human history.

“Isaac’s Eye is a witty, sharp and keenly charged piece of writing,” said Artistic Director Michael Halberstam. “Although the story may be an historic one, Lucas Hnath tells it in a very contemporary style, and with a refreshingly original voice. Furthermore, we get to explore this sharply defined jewel in the intimate confines of our bookstore theatre.
With our sexy, energized, and fiercely skilled cast, it makes for an ideal conversation to start the season.”

Lucas Hnath (Playwright) has written the following plays: The Christians (Commissioned and Produced by The Humana Festival of New Plays), Red Speedo (Studio Theatre, DC), A Public Reading of an Unproduced Screenplay about the Death of Walt Disney (Soho Repertory Theatre), Death Tax (Humana Festival/Steinberg Award and Royal Court), Isaac’s Eye (EST) and the short play NightNight (Humana Festival). He has been resident playwright at New Dramatists since 2011; he has enjoyed playwriting residencies with The Royal Court Theatre and 24Seven Lab.  He is under commission with Ensemble Studio Theatre and The Royal Court Theatre. Lucas received both his BFA and MFA from NYU’s Department of Dramatic Writing and is a lecturer in NYU’s Expository Writing Program.

Michael Halberstam (Artistic Director and Director) is the co-founder of Writers Theatre. He has directed over thirty-five productions for the company, including Not About Heroes (starring Nicholas Pennell), Private Lives, Look Back In Anger, Candida, The Father, Crime and Punishment, Benefactors, Seagull, The Duchess of Malfi, Othello, The Savannah Disputation, the world premiere musical A Minister’s Wife, Rosencrantz and Guildenstern Are Dead, She Loves Me, The Real Thing, Hamlet, Sweet Charity and Days Like Today. Halberstam has appeared in numerous Writers Theatre productions, including Richard II (title role), Loot and Misalliance. Previously, he spent two years at The Stratford Festival in Ontario and performed in Timon of Athens, The Knight of the Burning Pestle (title role), Much Ado About Nothing and As You Like It. Halberstam’s other Chicago acting credentials include productions with Wisdom Bridge, Court Theatre and Chicago Shakespeare Theater. Elsewhere he directed The Gamester (Northlight Theatre), A Man For All Seasons (Peninsula Players Theatre), Hamlet (Illinois Shakespeare Festival), Candida (Jean Cocteau Repertory in New York), Ten Little Indians (Drury Lane Oakbrook Terrace), a highly acclaimed revival of Crime and Punishment, which Writers Theatre produced off-Broadway at 59E59 Theatres in New York City, Enchanted April and State of the Union (Milwaukee Repertory Theater). In 2010 he directed A Minister’s Wife at Lincoln Center Theater, and also directed the west coast premiere at San Jose Repertory Theatre in 2013. His forays into opera have included The Rape of Lucretia (Chicago Opera Theater), Francesca De Ramini featuring the Chicago Symphony Orchestra conducted by Christopher Eschenbach and Le Freyshutz, a Berlioz adaptation of the Weber opera conducted by Christopher Eschenbach in its North American Premiere (Ravinia Festival). He spent two and a half years teaching Shakespeare at The Theatre School at DePaul University and has received awards for excellence in theater management and/or artistic achievement from The Chicago Drama League, The Arts & Business Council, Chicago Lawyers for the Creative Arts, and The Chicago Associates of the Stratford Festival. He also received the 2010 Zelda Fichandler Award, the 2013 Artistic Achievement Award from the League of Chicago Theatres, and was named the Chicago Tribune‘s 2013 “Chicagoan of the Year” for Theater. He currently serves on the executive board of the Arts Club of Chicago.

LaShawn Banks (Actor/Dying Man) returns to Writers where he previously appeared in The Liar, Travels with My Aunt, Old Glory, The Turn of the Screw, Othello, The Duchess of Malfi and To the Green Fields Beyond.  Chicago credits include The Island (Remy Bumppo Theatre Company), Edward II (Chicago Shakespeare Theater), Execution of Justice (About Face Theatre Company), A Year with Frog and Toad (Chicago Children’s Theatre) and five seasons of Charles Dickens’ A Christmas Carol (Goodman Theatre). Regional credits include Twelfth Night, Richard III, Troilus & Cressida, The Critic, Love’s Labours Lost, The Taming of the Shrew, Of Mice and Men (American Players Theatre), Around the World in 80 Days (Indiana Repertory Theatre), The Amen Corner (Cleveland Play House), Macbeth, The Comedy of Errors and Richard III at Notre Dame Shakespeare. He is a proud member of Actor’s Equity Association.

Marc Grapey (Robert Hooke) returns to Writers Theatre where he previously appeared in Picnic.  Other Chicago credits include Ask Aunt Susan, The Iceman Cometh, Race and the world premieres of Eric Bogosian’s Griller and Noah Haidle’s Vigils (Goodman Theatre); Mizlansky/Zilinsky or Schmucks, The Chosen, Antigone, Dead Man’s Cell Phone, Oblivion and The Birthday Party (Steppenwolf Theatre Company); The Normal Heart (TimeLine Theatre Company);  I Sailed with Magellan, Class Dismissed,Equivocation, and Edward Albee’s At Home at the Zoo (Jeff Award nomination) (Victory Gardens Theater);Richard III and The Taming of the Shrew (Chicago Shakespeare Theater); Funny Girl (Drury Lane Theatre Oakbrook Terrace); The Metal Children (Next Theatre Company); Early and Often, The Homecoming, andHitting for the Cycle (Jeff nomination) (Famous Door Theatre Company). Regionally, he has appeared at the Humana Festival of New American Plays at Actors Theatre of Louisville and the HBO Comedy and Arts Festival in Aspen, Colorado. He made his Broadway debut in 2005 opposite Nathan Lane and Matthew Broderick in the revival of Neil Simon’s The Odd Couple. Film credits include Warren, At Any Price, Superbad, Adventureland, Ali, While You Were Sleeping, A Piece of Eden and The Daytrippers. Television credits include The West Wing, Arrested Development, Two and a Half Men, Law & Order: Special Victims Unit, Chicago PD and most notably as publicist J.J. Mitchell on HBO’s Sex and the City. He is a co-founder of The Three Oaks Theater Festival, which just concluded its second season.

Elizabeth Ledo (Catherine) is thrilled to be back at Writers Theatre where her previous work includes understudying Deb Staples in the one woman show The Blonde, The Brunette and The Vengeful Redheadtwo summers ago as well as playing Raina in the 2005 production of Arms and The Man. She was most recently seen in TimeLine Theatre Company’s production of The How and The Why. Chicago credits include: A Midsummer Night’s Dream, As You Like It, Amadeus and Funk it Up About Nothin’ (Chicago Shakespeare Theater); The Real Thing, Uncle Vanya, Titus Andronicus, The Comedy of Errors, The Illusion, The Misanthrope, Tartuffe (– Jeff Award) (Court Theatre); 3 seasons of A Christmas Carol andBoleros for the Disenchanted (Goodman Theatre); Homebody/Kabul and Morningstar (Steppenwolf Theatre Company); The Odd Couple and Barefoot in The Park (Drury Lane Oakbook); The Chalk Garden(Northlight Theatre); Say You Love Satan and The Homosexuals (About Face Theatre) — where she is a company member. Regional credits include 5 seasons with Summer Shakespeare at Notre Dame, Indiana Repertory Theatre and over 25 productions with Milwaukee Repertory Theater. She is a proud graduate of Loyola University of Chicago.

Throughout the season, Writers will be offering post-show discussions on select Wednesday evenings following the performance.

In an effort to promote taking public transit to the Theatre, Writers Theatre launched a new promotion in 2013. Any audience member who purchases a ticket to a Writers Theatre production and rides Metra’s Union Pacific North Line to the Theatre may snap a photo of themselves on the train and post it to their Facebook page or Twitter feed with a tag of @writerstheatre and #[the title of the show], and upon showing the post at the Writers Theatre Box Office, receive $5 in cash (in essence, paying the cost of the train ride from Downtown ($4.75).

This promotion is available for a limited time only, and may end without warning. Ticket must have been paid for in advance. Not valid on comp tickets. More information available at writerstheatre.org/metra

Writers Theatre is pleased to welcome back BMO Harris Bank as Season Sponsor of its 2014/15 Season, NES Rentals as Major Corporate Sponsor and UBS as Corporate Sponsor of Isaac’s Eye.  Additionally Writers Theatre is pleased to have Laurie and Michael Petersen and Christopher S. Pfaff and Sara Pfaff as Artists Council Sponsors and Jim and Karen Frank, Christopher and Emily Knight, Sonia Marschak and David and Leslie McGranahan as Director’s Society Sponsors.

As construction begins on the new theatre center on Tudor Court, the 2014/15 season will celebrate the Theatre’s roots with two productions in the intimate, 60-seat Books on Vernon space (Isaac’s Eye andThe Diary of Anne Frank) and a site-specific production (Doubt: A Parable) in the library of the Glencoe Union Church.

Lucas Hnath is one of the country’s exciting young playwrights.  He was recently the toast of the Humana Festival of New Plays and he was recently part of Victory Gardens Theater’s Ignition Festival.  Another of his plays, Death Tax, will be playing simultaneously at Lookingglass Theatre Company.  Lucas is expected to visit Chicago for the two productions.

Over the past twenty-two seasons, Writers Theatre has become a major Chicagoland cultural destination with a national reputation for excellence. Under the artistic leadership of Michael Halberstam and the executive leadership of Kathryn M. Lipuma, Writers Theatre has been deemed the “best drama company in the nation” by The Wall Street Journal. The company, which plays to a sold-out and discerning audience of 35,000 patrons each season, has garnered critical praise for the consistent high quality and intimacy of its artistry. Prized for the finest interpretations of classic and contemporary theatre in its two intensely intimate venues, Writers Theatre’s acclaimed work includes Artistic Director Michael Halberstam’s world premiere in Glencoe and subsequent productions of A Minister’s Wife at Lincoln Center Theater and West Coast premiere at the San Jose Repertory Theatre; David Cromer’s productions of A Streetcar Named Desire and Picnic; and the commissioning, world premiere and New York premiere of Crime and Punishment, which has received more than 30 subsequent regional theater productions.

In July, 2011, Writers Theatre announced the hiring of the award-winning, internationally renowned Studio Gang Architects, led by principal Jeanne Gang, FAIA, to design a new home for the Theatre in downtown Glencoe which will once again allow the Theatre to grow to accommodate its audience, while maintaining its trademark intimacy. The new facility will resonate with and complement the Theatre’s neighboring Glencoe community and will add tremendous value to Chicagoland and the North Shore as a premier cultural destination.