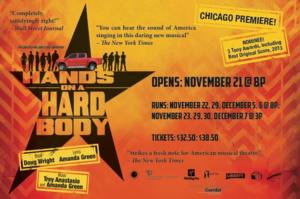 The Williams Street Rep is proud to present the Chicago premiere of the Tony-nominated Broadway musical ‘Hands on a Hardbody.’ Critics have raved about this hilarious musical infused with a country rock beat! Last one standing drives away with the American Dream! The Williams Street Rep presents ‘Hands on a Hardbody,” November 21st through December 7th at the Raue Center for the Arts.

“This is an Everyman’s musical that has country and rock infused into the characters. We’re proud to be the first to produce it in Chicago right off its Broadway run.” Richard Kuranda, Founding Artistic Director, Williams Street Rep.

*Inspired by the true events and the critically acclaimed 1997 documentary of the same name by S.R. Bindler, produced by Kevin Morris and Bindler

Hands on a Hardbody, with book by Doug Wright (Pulitzer Prize Winner), music by Amanda Green & Trey Anastasio (Phish), will be directed by Mark Mahallak.

Tickets for Hands on a Hardbody are $32.50 and $38.50. Show runs Friday through Sunday. All seats reserved. You can reach the box ofCice at 815.356.9212 noon to 4pm Monday through Saturday or visit us online at www.rauecenter.org.

About Williams Street Rep: Williams Street Repertory is currently in its 4th Season in residence at Raue Center for the Arts. WSR is dedicated to sustaining an artistic process of innovative and emotionally charged work, telling diverse stories, and creating an in-house production company of well-respected artists. WSR was made possible through support provided by Susen Ha?nkansson Berg and James C. Berg, the City of Crystal Lake, ComEd, McHenry County Community Foundation and Epic Repertory Theater Company.

About Raue Center For The Arts: Raue Center is a 501(c)3 non-profit organization dedicated to enriching the lives of all through the arts. For 13 years, they have provided quality programming – striving to make it pertinent, available and affordable to all. As a painstakingly restored, 1920s regional showcase theatre named for its benefactor-Lucile Raue-Raue Center has attracted the finest stars, Broadway shows, musicians and artists. Named on the League of Historic American Theatres, Raue Center is one of the finest examples of restored art and decor in the nation. The 750-seat theatre, located in historic, downtown Crystal Lake, is a gathering place for our region’s citizens and has become a true destination. For additional information, visit rauecenter.org, facebook.com/RaueCenter andtwitter.com/RaueCenter.