Anthony and Joseph Tomaska, long-time producers of one of Chicago’s most successful long-running productions (Tony n’ Tina’s Wedding) and proprietors of the former Chicago Center for the Performing Arts, announce the acquisition of a 800 seat theater in Wisconsin Dells to be named the Palace Theater, 564 Wisconsin Dells Pkwy South. The Palace Theater, a professional regional theater in Wisconsin Dells, will kick off its first season with Disney’s MARY POPPINS, directed and choreographed by Multi Jeff Award winner Marc Robin (co-directed by Buddy Reeder), previewing November 19, and opening November 24 (running through January 3, 2015). Nationally known stand-up comedian and actor, Tom Dreesen, long time guest of The Tonight Show, and The David Letterman Show will serve as the emcee at the opening night performance. The complete 2014-2015 season will be announced in the coming weeks

The Palace Theater is a state-of-the-art, regional theater destination that produces classic American musicals in a style and quality consistent with that of Broadway, and will also present nationally known bands and comedians for concert engagements. The Palace Theater will produce three to four family-friendly, classic musical revivals, while serving a full meal included in the ticket price. Group packages are available. 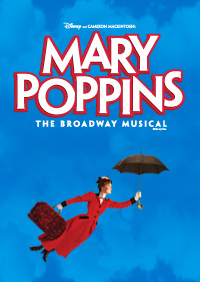 “I’ve always loved the Wisconsin Dells area. As a kid, my parents used to take us to the Dells every summer. We are so excited and honored to join this growing community of amazing attractions. The Palace Theater is beautiful. It’s been a dream of mine to produce a Disney show, and Mary Poppins is the ultimate Disney classic,” said Anthony Tomaska.

The world’s most beloved nanny MARY POPPINS will kick off the Palace Theater’s first season. Based on P.L. Travers’ cherished stories and the classic 1964 Walt Disney film, MARY POPPINS features a magical score including “A Spoonful of Sugar,” “Chim Chim Cher-ee,” “Supercalifragilisticexpialidocious,” and “Let’s Go Fly a Kite” by the Academy Award-winners Richard M. and Robert B. Sherman. The stage production was created, in collaboration with Cameron Mackintosh, by Academy Award-winning screenwriter Julian Fellowes (book), and the Olivier Award-winning team of George Stiles and Anthony Drewe (new songs and additional music and lyrics).

With almost 30 years of experience in the entertainment and food service industries, Anthony and Joseph Tomaska are uniquely poised to quickly launch an operation of this magnitude and make it successful.

The facility will also serve as a conference center, catering to social events and family gatherings. The in-house chef will design an elegant and unique menu that is customizable for any occasion. The staff in all departments possess a passion for uncompromising service that will create a spectacular theater and dining experience

With an ideal location across the street from the Wilderness Spa & Resort, the country’s largest indoor waterpark, the Palace Theater is likely to become a major cultural and tourism attraction for the Dells’  5 million annual visitors. The community of Wisconsin Dells is predominantly comprised of the City of Wisconsin Dells and the Village of Lake Delton. Its roots as a tourism community date back more than 150 years when the first visitors came for scenic tours of the Wisconsin River with towering sandstone cliffs hugging its shores. Today, Wisconsin Dells is widely recognized as “The Waterpark Capital of the World!®”