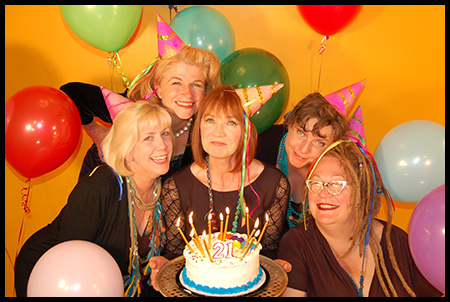 Solo-performance group Sweat Girls are proud to announce their latest stand-alone production, The Sweat Girls are …21 and Finally Legal!, playing at the Heartland Studio, 7016 N. Glenwood Ave., September 26 – October 12. Celebrating their 21st solo-performance anniversary, the Sweat Girls consist of writer-performers Caroline Andres, Cindy Hanson, Dorothy Milne, Clare Nolan,Martie Sanders and Pamela Webster. Performances are Fridays and Saturdays at 8 p.m. and Sundays at 4 p.m. Tickets are $20 and can be reserved by calling 630.414.3939 or e-mailing tickets@sweatgirls.org. For more information, please visit www.sweatgirls.org.

Called the “undisputed tribal elders” (Chicago Reader) of the solo performance scene, the Sweat Girls have been baring their souls with “fearless authenticity” and “contagious gusto” for more than two decades, all the while making it look all so easy. Join their 21stanniversary party as they celebrate senior discounts, finding your inner tween, hunting for Joan Baez (in all the wrong places) and figuring out if you are actually the brunt of all those teenage jokes. Sweat Virgins and Sweat Fans alike are encouraged to come and sweat it out with the Girls. There will be cake!

ABOUT THE SWEAT GIRLS

21 years ago, when autobiographical story telling was emerging as an entertainment option, the Sweat Girls mounted their first show I’m Sweating Under My Breasts at the Annoyance Theater. Since then, this collective of women writer-performers has honed a distinctive monologue style, performed from New York and San Francisco, and entertained its devoted Chicago following.

To speak with honesty, authenticity and humor about the human condition, as they have experienced it — that is the collective Sweat Girls goal. While their work is autobiographical and rooted in the monologue form, they stretch solo performance beyond its traditional structure by collaborating with other artists — filmmakers, musicians, choreographers, and visual artists — in order to give audiences a multitude of ways to connect with each story. Whatever form each Sweat Girl production takes, they attempt to never lose what’s essential to their style — what Chicago’s NewCity called their “emotional power, heartfelt comedy and strong bonding with the audience.”

Caroline Andres has worked as an actress and arts manager in Los Angeles and Chicago. As an actress she earned a Drama Critics Award Nomination in LA for comedic acting. She has performed with Athenaeum Theatre Co, Blind Parrot Productions, Eclipse Theater, Healthworks, Lifeline Theatre, Sacred Fools, Piven Theater, Village Players, Victory Gardens. Arts management highlights include Admin Director for Piven Theatre and Arts Expand, running after school arts programs for LA Unified School District and The Mark Taper Forum, and founding the Around the Coyote Festival in Chicago. She is currently pursuing an M.A. in Teaching.

Cindy Hanson is the co-writer of Cooking With Lard and co-adaptor of Hen Lake, both first produced at Lifeline Theatre. She has written and performed Evelyn Dances in Chicago, Louisville and San Francisco where she was nominated for a Bay Area Critics Award and the performance piece, Me and My Chakras, a workshop for Manhattan Theatre Source’s

Dorothy Milne leads the Lifeline Storytelling Project and co-curates the annual Fillet of Solo Storytelling Festival. She is an ensemble member and the artistic director of Lifeline Theatre, where she received a Non-Equity Jeff Award (Direction) for Around the World in 80 Days, and Non-Equity Jeff Nominations (Direction) for Pistols for Two, Jane Eyre (After Dark Award), Strong Poison, and Gaudy Night. Outside of Lifeline, Milne directs occasionally for Griffin Theatre and received an Equity Jeff Nomination for her direction of Eleemosynaryat Interplay Theatre Company.

Pamela Webster received a Jeff Award for Artie in Eleemosynary at Interplay, a Jeff Citation for her performance in Noises Off at Pegasus Players and a Jeff Nomination for best supporting actress for Interplay’s Les Liaisons Dangereuses. With a fellow Sweat Girl, Webster co-adapted a children’s musical, Hen Lake, which premiered at Lifeline Theatre. She is a certified LAMAS Qi Gong instructor.

Solo-performance group Sweat Girls are proud to announce their most recent stand-alone production, The Sweat Girls are … 21 and Finally Legal!, playing at the Heartland Studio, 7016 N. Glenwood Ave., September 26 – October 12. Celebrating their 21st solo-performance anniversary, the Sweat Girls consists of writer-performers Caroline Andres, Cindy Hanson, Dorothy Milne, Clare Nolan,Martie Sanders and Pamela Webster. Performances are Fridays and Saturdays at 8 p.m. and Sundays at 4 p.m. Tickets are $20 and can be reserved by calling 630.414.3939 or e-mailing tickets@sweatgirls.org. For more information, please visit www.sweatgirls.org.