Sitting through Timeline’s phenomenal World premiere of Susan Felder’s ‘Wasteland’ is one of the most daunting and moving experiences you will have in the theatre. Everything regarding this production is painstakingly and methodically crafted to make it palpable.

Wasteland (not to be confused with the T.S. Elliott poem) tells the segmented story of two Vietnam prisoners of war, only one if which we get to see, while the other is a disembodied voice. The soldiers are held in separate underground cells with only a small hole high above to give them a glimpse of natural light. Both G.I.’s are named Joe (ironic), but that is where the similarities end. The first Joe (Nathan Burger) we are introduced to is a self proclaimed Yankee who struggles with his sexual identity. He has been held for six months and the mental and physical scars are prevalent. The captures soon bring in his antagonist who is held in the Earth next to Joe and is called by his last name, Riley (Steve Haggard). Where Joe is a more educated, anti-war, progressive character, Riley is fulfilling his duty has American where the mission is not be to questioned. This sets up the duality of the evening, allowing the two P.O.W.’s to find commonality in their dire dilemma.

Wasteland is masterfully directed by William Brown, who allows his actors to dictate the pacing of the play, which undoubtedly changes each evening. Mr. Burger and Mr. Haggard are no less than sensational, both conveying such truth in each of their characters. The other stars of the production are the design team where Kevin Depinet’s set allows Mr. Burger’s character to unravel, along with Jessie Klug’s realistic lighting and Andrew Hansen’s haunting, echoing sound design. 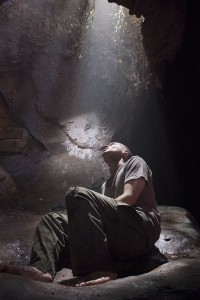 Knowing that over 1600 soldiers were unaccounted for at the end of the Vietnam War makes this play all the more gripping. The soldiers find brotherhood in their calamity allowing their differences to bond them in a way none of us, thankfully, will ever know. Unlike other plays or musicals of this genre, Wasteland is a more daunting work, where the world seems to stop and swallow these boys whole. This is an actor's’ piece with Mr. Burger and Mr. Haggard turning in the best performances of their career.

Wasteland runs through December 30th at Timeline Theatre, 615 West Wellington, Chicago: Performances are Wednesdays and Thursdays at 7:30 p.m.,Fridays at 8 p.m.,Saturdays at 4 and 8 p.m. and Sundays at 2 p.m., There is NO performance on November 22nd/Thanksgiving, but there is an added 4 p.m. on the 23rd. Tickets range from $32-$42 and can be purchased by calling 773-281-8463 ext 6 or online at www.timelinetheatre.com For calendar information, please visit www.theatreinchicago.com Photo Credit: Lara Goestsch