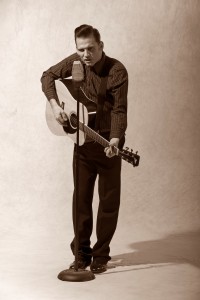 From the iconic songbook of Johnny Cash comes a unique musical about love and faith, struggle and success, rowdiness and redemption, and home and family. Theatre at the Center, 1040 Ridge Road, Munster, Indiana, ignites their 2014 season of Premieres with RING OF FIRE- THE MUSIC OF JOHNNY CASH Thursday, February 20 through March 30 with a press opening Sunday, February 23.  More than 35 of Cash’s hit songs including “I Walk the Line”, “A Boy Named Sue,” “Folsom Prison Blues” and the title tune, paint a musical portrait of The Man in Black that promises to be a foot-stompin’, crowd-pleasin’ salute to the uniquely American Legend. Leading the cast as “Johnny Cash” will be Kent Lewis with Jeff Award-winner Cory Goodrich starring as “June Carter” and Michael Goodman as “Young Johnny”. Four talented multi-instrumentalist/performers round out the cast – Greg Hirte, Malcolm Ruhl, Billy Shaffer, and William Underwood.

The musical revue RING OF FIRE- THE MUSIC OF JOHNNY CASH guides audiences on a journey through Cash’s storied life and celebrated music, from the cotton fields of Arkansas to the Grand Ole Opry.  The show was created by Richard Maltby, Jr., conceived by William Meade, with orchestrations by Steven Bishop and Jeff Lisenby.  This version is a re-imagining of the original Broadway production, more intimate, but with a full musical soundscape.

Cash is primarily remembered as a country music artist; however his style spanned from gospel to folk, rock to blues, and country in between.  Both critically and audience acclaimed, this production has brought audiences to their feet at large and small theaters around the country.  The New York Postcalls the production “Effective, funny and imaginatively presented,” “Ring of Fire is HOT!” declares Variety.  “It’s touching and exuberant,” says the Associated Press.

Performances are Wednesdays and Thursdays at 2:00 p.m.; Fridays and Saturdays at 8:00 p.m.; Sundays at 2:30 p.m.; and select Thursday evening andSaturday matinees.  Individual ticket prices range from $40 – $44.  To purchase individual tickets call the Box Office at 219.836.3255 or Tickets.com at800.511.1552.  Group discounts are available for groups of 11 or more and gift certificates are also available. New 2014 Season Subscriptions are on sale now.  New subscriptions range from $150 – $160 and make the perfect holiday gift!  For more information on Theatre at the Center, visitTheatreAtTheCenter.com.