The Hypocrites present the World Premiere of ALL OUR TRAGIC 32 Surviving Greek Tragedies Performed In One Epic Narrative Adapted and Directed by Founding Artistic Director Sean Graney August 2 – October 5, 2014 Inaugurating Its New Home at The Den Theatre 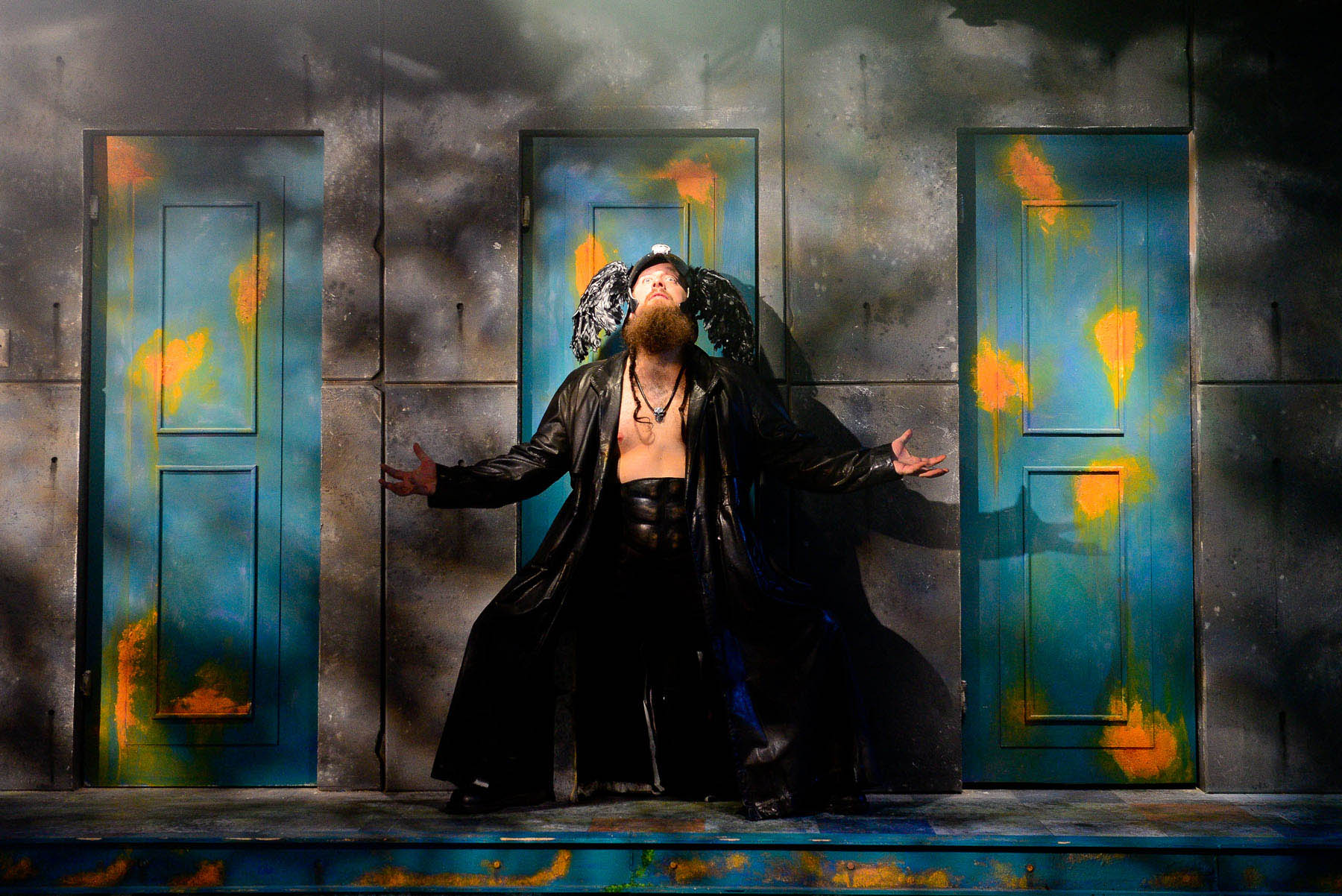 ) Max Lapine in The Hypocrites’ world premiere of ALL OUR TRAGIC adapted and directed by Sean Graney. Photo by Evan Hanover.

The Hypocrites are pleased to launch their 2014-15 Season with the world premiere of ALL OUR TRAGIC, an unparalleled twelve-hour theatrical adaptation that combines all 32 surviving Greek tragedies into a single epic narrative, adapted and directed by Founding Artistic Director Sean Graney*, playing August 2 – October 5, 2014 at its new home, The Den Theatre, 1329-1333 N. Milwaukee Ave. in Chicago.  ALL OUR TRAGIC marks the inaugural production at The Den’s new, fully adaptable, street level theatre where the The Hypocrites will be the resident company. Single tickets for ALL OUR TRAGIC are currently on sale, with a variety of flexible season subscription packages also available.  Patrons wishing to support this historic undertaking are invited to participate in the “All Our Tragic Funding” campaign. For tickets, subscriptions and campaign information, please visit www.the-hypocrites.com.

Audiences can choose to enjoy ALL OUR TRAGIC in a single twelve-hour experience on Saturdays and Sundays (including multiple intermissions, meal breaks with food provided and a cash bar available) or in four shorter installments over consecutive Friday or Monday nights.

From the most popular titles to the most rarely produced, experience the 32 surviving Greek tragedies by Aeschylus, Sophocles and Euripides in one breathtaking and unforgettable theatrical event. Blended with humor and set against a contemporary backdrop, ALL OUR TRAGIC builds on the success of The Hypocrites’ 2011 production of Sophocles: Seven Sicknesses, which received critical praise and earned multiple Jeff Awards including Best Production and Best Director.

ALL OUR TRAGIC is designed to create a contemporary Festival of Dionysus, the ancient gatherings for which these tragedies were originally crafted – to bring together a daily community to bond, eat food, drink wine and discuss complicated topics of society that we have been wrestling with since the creation of civilization.

“I really hope that audiences enjoy this project – it’s the most personally meaningful piece of theater I have created,” comments adapter and director Sean Graney. “I have never devoted so much time and energy to a single project. During three years of developing the script, I partnered with about ten different institutions, adding great depth to the process. From the beginning of my work I always imagined what a production would look like, but as the script reached the point where it would be ready for actors, I began to think what a rehearsal process would look like. I quickly realized that there could be no other theater in the world with which I would rather premiere this epic and personal play. How could I not make this play with all of my friends at The Hypocrites- by friends I mean actors, designers, the administration, the crew, I love everyone. It would feel strange and uninspiring to bring it someplace else. I am so happy to be sharing All Our Tragic for the first time to an audience with The Hypocrites,” add Graney.

Title:  ALL OUR TRAGIC

Tickets: Fridays and Mondays: $30 each. Saturdays and Sundays: $75. Single tickets and Season Subscription packages are available at www.the-hypocrites.com.

Following its Chicago run, Graney and the cast of ALL OUR TRAGIC will travel to Los Angeles for a week-long reading at the prestigious Getty Villa, part of the J. Paul Getty Museum. The educational center and museum is dedicated to the study of the arts and cultures of ancient Greece, Rome and Etruria.

About the Adapter/Director
Sean Graney has directed over 30 productions for The Hypocrites since 1997. He recently returned from a Fellowship at the Radcliffe Institute for Advanced Study at Harvard University. In 2004, Graney was a participant in the NEA/TCG Career Development Program for Directors. He has won four Joseph Jefferson Citation awards for the Direction and Adaptation for Sophocles: Seven Sicknesses, and Directing of Equus and Machinal. He has directed Edward II (Chicago Shakespeare Theater), The Hairy Ape (Eugene O’Neill Festival at Goodman Theatre), The Comedy of Errors, The Mystery of Irma Vep and What the Butler Saw (Court Theatre), Yankee Tavern (Milwaukee Rep) and The Elephant Man (Steppenwolf for Young Audiences).

Founding Artistic Director Sean Graney* created The Hypocrites in 1997. It is currently run by Artistic Director Halena Kays* and Managing Director Megan Wildebour*. The Hypocrites are recognized as groundbreakers that defy the audience’s expectations. The company has grown significantly in the past few years, receiving acclaim for productions at the Steppenwolf Garage, Goodman Theatre, Museum of Contemporary Art, DCASE Storefront and Chopin Theater. The company’s smash-hit production of Our Town, directed by David Cromer, transferred in 2009 to Off-Broadway, Los Angeles and Boston. The Pirates of Penzance has appeared at Actors Theater of Louisville and American Repertory Theater (A.R.T.). A.R.T. has also brought Romeo Juliet, 12 Nights and The Mikado (forthcoming). The American Theatre Wing, best known as the creator of the Tony Awards, presented The Hypocrites with one of the 2013 National Theatre Company awards in 2013. For more information, please visit www.the-hypocrites.com.