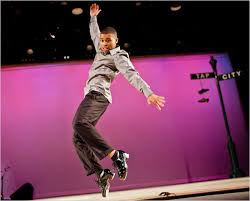 Cartier Williams is teaming up with the Chicago Human Rhythm Project to bring the joy of dance to students and performance-goers of all ages. Williams’ latest touring show, Rhythm Refix, will take the stage at the Museum of Contemporary Art in Chicago onSaturday August 2, 2014 at 7:30 PM. Williams will also lead workshops and master classes for students of various levels from Friday August 1stthrough Sunday August 3rd at the Chicago Human Rhythm Project at 410 S. Michigan Avenue.

Williams is excited to be a part of the Chicago Human Rhythm Project’s summer festival and is especially enthusiastic about performing Rhythm Refix.  “My style of dance is heavily influenced by DADAism, and Rhythm Refix represents the deconstruction of tradition, breaking boundaries, and taking chances,” said Williams.

He will be performing with his company of young and accomplished dancers, including Jason Janas, Luke Hickey, Daniel Borak, and Jumaane Taylor. Williams’ workshops and master classes throughout the weekend will give Chicago students the opportunity to learn his signature choreography and explore their own individual creativity through dance.

“As soon as I saw Cartier and Rhythm Refix in Zurich, I knew the Chicago Human Rhythm Project had to present this work as a part of our summer festival,” noted Lane Alexander, Founder and Director of the Chicago Human Rhythm Project. “Cartier’s dancing, choreography, and storytelling bend the perception of what tap dance is and the possibilities of what tap dance can become. Cartier is without a doubt one of the leading lights in the global percussive dance community, and we’re thrilled to bring his work to Chicago audiences.”

Cartier Williams, the child prodigy of tap dance, is a hoofer, choreographer, filmmaker and performer hailing from Washington, D.C. He began his tap dancing career at the age of four and has been active in the tap dance community ever since. Throughout his career, Cartier has had the opportunity to dance with a multitude of tap pioneers and masters, including Gregory Hines, Savion Glover, Peg Leg Bates and the Nicholas Brothers. He has appeared on “The Oprah Winfrey Show,” “The Tonight Show,” “Good Morning America” and CNN. Cartier has performed for President Clinton, co-starring with Bebe Neuwirth in the PBS special “In Performance at The White House.”  He also performed for President George W. Bush at the 2006 Congressional Picnic at the White House. Cartier is currently continuing to develop multiple musical productions, as well as expanding his brand with products including tap shoes and instructional videos.