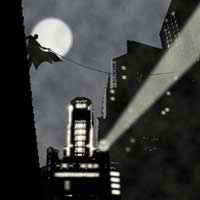 Strawdog Theatre Company’s Hugen Hall is proud to announce the world premiere of Detective Partner Hero Villain by Brett Neveu, directed by Gus Menary, November 26 – December 17 at the Strawdog Theatre Hugen Hall, 3829 North Broadway Street. The performance schedule is Sundays, Mondays and Tuesdays at 8 p.m.  Tickets are $15. Tickets may be ordered online at strawdog.org or by calling OvationTix toll-free: 866-811-4111.

Brett Neveu’s Detective Partner Hero Villain introduces the audience to veteran Detective Bradley Manners, the reluctant police department liaison to The Fantastic Phenomenon, the city’s secretive superhero. As the story begins, the city is in chaos due to the appearance of a dangerous and deadly serial killer plaguing individuals wearing the popular cowled face of The Fantastic Phenomenon. The detective contacts The Fantastic Phenomenon for help, which sets the trusted, yet recently agitated, superhero’s world tilting toward serious soul searching. Meanwhile, the detective starts to have his own “crisis of faith” as he begins to see the flaws in The Fantastic Phenomenon and starts to realize his own shortcomings through conversations with his grizzled partner. Attempting to drown his sorrows at a local shady bar, the detective is confronted by Supernova, the city’s latest super villain, and most likely the horrible serial killer himself. Through a series of explosive and fascinating twists, the detective confronts both the hero and the villain, questioning their individual motives, as well as his own. As the detective fights to understand what it all means, will he discover secrets kept hidden, or will he learn that too much knowledge isn’t always a good thing.

Recent theatre productions include The Opponent and Megacosm with A Red Orchid Theatre and 4 Murders with SkyPilot Theatre. Film productions include the short Convo with Breakwall Pictures, the feature The Earl with Intermission Productions and the upcoming Christmas Bytes with Wild Mouse Productions. Past theatre work includes productions with The Royal Court Theatre, Writers’ Theatre, The House Theatre, The Inconvenience, The Side Project, The Goodman Theatre, The Royal Shakespeare Company, TimeLine Theatre Company, A Red Orchid Theatre and American Theatre Company. He is a 2012 Sundance Institute Ucross Fellow and the recipient of the Ofner Prize for New Work, the Emerging Artist Award from The League of Chicago Theatres, an After Dark Award for Outstanding Musical (Old Town with Strawdog Theatre Company) and has developed plays with companies including The New Group, The Goodman Theatre, Steppenwolf Theatre, Victory Gardens and is a resident-alum with Chicago Dramatists. He is also an ensemble member of A Red Orchid Theatre, a member of The Playwrights’ Union and an alumni member of the Center Theatre Group’s Playwrights’ Workshop. Brett has been commissioned by The Royal Court Theatre, Manhattan Theatre Club, Steppenwolf Theatre Company, The Goodman Theatre, TimeLine Theatre Company, Writers’ Theatre, Strawdog Theatre and has several of his plays published through Broadway Play Publishing, Dramatic Publishing and Nick Hern Publishing. Brett has taught writing at DePaul University, Second City Training Center and currently teaches at Northwestern University.

Gus Menary is a founding member of Jackalope Theatre Company and directed Shawn Reddy’s My Name is Mudd and Andrew Burden Swanson’sMoonshiner under their banner. He is a company member and director of music programming for the arts organization The Inconvenience for whom he most recently directed B-Side Studio by Ike Holter and Evan Linder. He has worked with many other theatre companies in the Chicago area including Mary Arrchie, Pinebox, Live Wire, First Floor Theatre and American Theatre Company.

Anderson Lawfer is a Strawdog Company Member since 2002, appearing recently in Conquest of the South Pole and The Master & Margarita. He also directed Hugen Hall’s critically acclaimed Pontypool , Kill Shakespeare and 1,001 Afternoons In Chicago with Access Contemporary Music.  He is the host of Theatre Wars! and The Direct Off! at Strawdog’s Hugen Hall and the late night hit The Game Show Show…and Stuff! (which started in Strawdog’s Hugen Hall!) Lawfer is also the curator of the Chicago theatre insider blog “Eric and Andy’s Reviews You Can Iews.” and hosts the Red Carpet Show at the non-equity Jeff Awards for Theatreinchicago.com.

Since its founding in 1988, Strawdog Theatre Company has offered Chicagoland the premiere storefront theatre experience and garnered numerous Non-Equity Jeff Awards with its commitment to ensemble acting and an immersive design approach. The celebrated Company develops new work, re-imagines the classics, melds music with theatre, asks provocative questions and delivers their audience the unexpected.

All productions, plus ongoing late night offerings, are presented at Strawdog’s space in the heart of Chicago’s Lakeview neighborhood, 3829 N. Broadway Street. Tickets are available at .773.528.9696 or www.strawdog.org

The neighborhood has limited paid parking and is easily accessible by public transportation (via the Red Line Sheridan stop, plus 36-Broadway, 80-Irving Park, and 151-Sheridan buses).

The critically acclaimed adaption of Charles Dickens’ classic Great Expectations, adapted by Gale Childs Daly and directed by Jason W. Gerace, has been extended through December 22, at Strawdog Theatre, 3829 N. Broadway St.. The performance schedule is Thursdays, Fridays and Saturdays at 8 p.m. and Sundays at 4 p.m. Single Tickets are $28 and on sale now. Subscriptions, group, senior and student discounts are also available. Tickets may be ordered online at strawdog.org or by calling 773.528.9696.

The positive word of mouth from audiences as well as favorable critic reviews including “Highly Recommended … a stunner on every level,” from theChicago Sun-Times, Great Expectations “is never dull for a moment,” declared the Chicago Tribune and a five out of five stars from Time Out Chicago, has resulted in sold out houses.