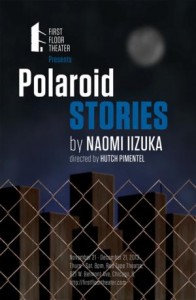 POLAROID STORIES is an explosive re-imagining of Ovid’s Metamorphoses that blends interviews from street-based youth and sex workers with ancient myth. The play takes place in the underbelly of a city where junkies scheme, lovers run and the lost wander, a refuge for those living on the edge of society. Iizuka illuminates the depths of a metropolis with her chaotic elegy of desire, desperation and transcendence. FFT’s production explores the complex intersection of two different modes of storytelling, documentary and mythology, and the power of their confluence. The design aesthetic embraces a similar method of reimagining technologies and materials for new use.

Tickets for POLAROID STORIES will be available at http://firstfloortheater.com/. Tickets will go on sale on November 4, 2013.

Please note: There will be no performances Thanksgiving weekend. There is an added performance on Monday, November 25, 2013.

Tickets for POLAROID STORIES will be available at http://firstfloortheater.com/. Tickets will go on sale on November 4, 2013.

Naomi Iizuka’s Polaroid Stories was originally commissioned by En Garde Arts in New York, produced in the 1997 Humana Festival of New Plays at Actors Theatre of Louisville, and received the 1998 PEN Center West Award for Drama. Her other plays include 36 Views, Anon(ymous), After a Hundred Years, At the Vanishing Point, Language of Angels, Tattoo Girl and Skin. Her work has been produced by The Goodman Theatre, Timeline Theatre, Guthrie Theater, The John F. Kennedy Center for the Performing Arts, Huntington Theatre Company, Berkeley Repertory Theatre, The Public Theater. Ms. Iizuka is a member of New Dramatists and the recipient of a Joyce Award, a PEN/Laura Pels Award, an Alpert Award, a Whiting Writers’ Award, a Stavis Award from the National Theatre Conference, a Rockefeller Foundation MAP grant, an NEA/TCG Artist-in-Residence grant, a McKnight Fellowship, Princeton University’s Hodder Fellowship and a Jerome Fellowship. She is the head of the graduate MFA Playwriting program at the University of California, San Diego.

Hutch Pimentel joined First Floor as the Artistic Producer after working as the Associate Producer of Sexual Perversity in Chicago, and has since then worked as a Director & Co-Curator on GrimmFest, and this fall he is directing Polaroid Stories. Previous directing credits include Back of the Throat and 4.48 Psychosis. He worked previously at About Face Theatre, where he assistant directed and produced The Pride. He is a graduate of Kalamazoo College.

First Floor Theater, founded in 2012 by University of Chicago graduates, makes theater to feed the audience’s intellectual curiosity by re-imagining classical texts, adapting literary treasures, and creating new work for our time that stands on the shoulders of the past. FFT was named the “Best New Theater Company” in the Chicago Reader’s Best of 2013 Reader’s Pick edition.