The Last Ship, (music and lyrics by Sting; six time Grammy winner, Rock and Roll Hall of Fame inductee,) is a new Broadway Musical that is in summery an astonishing devolution of the stage musical. Devolution is a tainted word and should not be misinterpreted in its usage here, because The Last Ship is spectacular  in every way. To truly understand the brilliance that shone so bright on stage last night one has to understand the history of this particular art form. 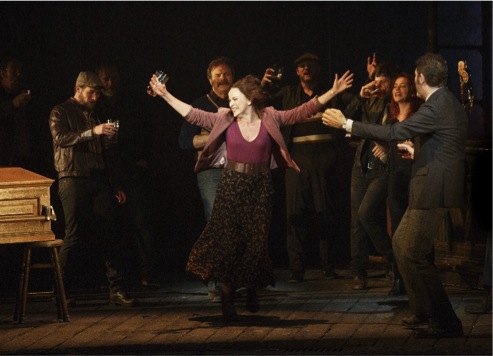 In Ancient times the Greeks would celebrate festivals to the gods by enacting stories – -, huh? To far back? Okay, fine, fast forward, in the 1920’s- and thirties there were clubs where vocalists would get up on stage and do a few songs, these sets evolved into a method of Liner story telling through song and dance numbers. The American Musical was born, though out the 50s-60’s -70’s – and into the 80’s the musical pretty much didn’t change, in structure. Dialogue scene tells story, then bam scene ends on a song and dance number. Prime examples that everyone knows include “The Sound Of Music”, “White Christmas”, “Annie”, “Little Shop of Horrors” Bop she bop. Then comes along a Man by the Name of Webber; A. L. Webber, him and his Feline Friends, changed the face of the American Musical, for 2 decades. Dialogue was out, no longer was it scene, song, scene, everything was about the music, everything was sung. It was new and amazing, seriously go watch “Joseph and the Amazing Technicolor Dream Coat”. Count how many times a person speaks, not sings, actually speaks. You won’t run out of fingers. What Webber did was transformative. What Sting; John Logan and Brian Yorkey (who wrote the book, in theater terms that means the script that isn’t sung, the dialogue bits, Book for short.) have done is just as transformative, the Last Ship will awaken a new / old era in the American Musical’s history.

See the problem of late has been that Broadway has become too reliant on skeptical, this isn’t overtly a bad thing, but it makes it EASY. If all you need is a spectacle, you don’t need to focus on story. Webber, though an amazing story teller, opened the door to this era of spectacle, and the loss of the narrative. If you don’t need to tell a story to make your play great, you could put any piece of garbage up and call it a musical, why not, Let’s turn the Evil Dead, or Rocky into musicals, story why bother, long as there’s a catchy tune and a lot of cool effects people will line up. Wait; they what, really? There  is now an Evil Dead Musical, and a Rocky; Who knew? 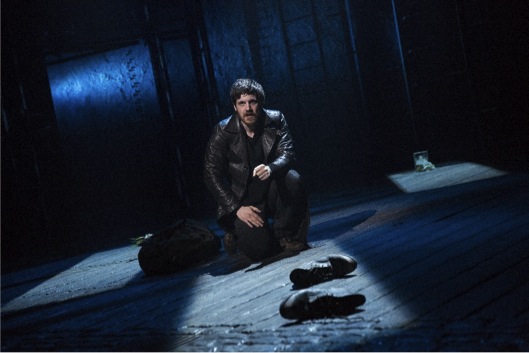 This is why Sting and Director Joe Mantello, Choreographer Steven Hoggett, the entire  cast, crew, and production, all the way down to the girl/guy who gets them coffee, deserve every, every award that can be heaped on them, until they are drowning in gold statues and plaques, “The Last Ship” is just that good!

A snippet of lyrics sticks out in my head, “A working Man works til the industry dies,” isn’t that such a statement on our society. The Japanese and the Chinese can build a ship cheaper so the labor goes to them, what of the workers left behind when there is no work to do? “Occupy the Ship Yard,” Occupy? A word rife, with undertones of social conscience. Deep philosophical and spiritual themes, sin redemption, love, freedom, “dream of a ship that would carry his soul to sea… to the island of souls” religion vs. faith, industry vs. the common man, union, Marxism, all play roles in the tale of Gideon, tied together with Sting’s haunting nature metaphors water, ever flowing, the river, the ocean, the sea.

Perhaps, “the play is the thing where in to catch the king?” Oh don’t fear, dear reader, this is not a sermon, this is not a heavy load to bare the social conscience. Though these deep themes play through out there is a light air that abounds, laughter echoed off the walls of the theater. I cannot go on without giving special recognition to the writers of course, for his creation, but more to Fred Applegate, who plays the role of Father O’Brien, who carries both the spiritual load and most of the shows humor, a heavy load to bare, but he does it with such grace. “A man’s work is sacrament. We must not lose faith, humanity, redemption, grace … though they pay shite” Brilliantly written and brilliantly performed his role carries the weight of the play on its back, and he does it with stunning ease, bravo sir. 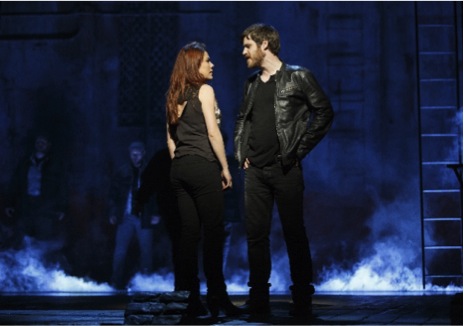 The story; we were told is about Sting’s early life. Now how biographical it is, is up for debate. But you can tell there is a lot of heart flowing through the words and music. The music, starts slow a haunting tune, a ghost town of a back drop, a solo figure on stage. Then the narrator sings, introducing us to Gideon (played by Collin Kelly-Sordelet; the Older version and for most of the story is played by Michael Esper). Now there is a slight problem at this point and if I don’t point it out no one will even be bothered by it but it did bother me so I will. The play opens with a narrator motif, but then the narrator vanishes never to reappear, if you introduce a Motif especially if you open with it, please do the curtsy of following through, with it. Still minor, minor glitch in an overwhelmingly magnificent production. The music throughout transcends haunting melody with an off mix a Celtic reels, and jig, it becomes chantey at point melodic at other but always the feel of Ireland remains. If you’re hoping for St Patty’s day drunken leprechaun tunes don’t, no “Riverdance” this, this is the true Irish melody, remorseful, but with a bitter understanding of humor tinged throughout, of course you can hear Stings own personal style woven into the mix as well. There is only problem with the music, you can if you listen with the write ears hear Sting’s voice singing, and the performers, while their voices are amazing, are pale echo’s to his. Still. Beautiful and Sad, in that Irish only, laughable melancholy meme.

We are then introduced to Meg (Also duel played young/older, Dawn Cantwell / Shawna M. Hamic, both brilliant in the role and awesome beauties to behold.) Gideon and Meg, live a passionate childhood and teen romance dreaming of escaping the industrial ship building town where they live. Dreaming of getting out. Gideon flea’s promising Meg he will return, but he cannot take the abuse from his father any more. He sings on as a sailor and sails out of her life.

Fifteen years later he does return, his father is dead. So he finally returns home. To settle his father’s affairs, though he spends more time, trying to rekindle a fifteen year romance with Meg and Rallying the town against Meg’s new lover, who works for the fiendish corporation, who’ve bought the shipping industry right out of town. Occupy the Shipyard!!! One could easily have cast the new lover as a villain, but the writers are so good that not only keep him from the role of villain, but actually make you feel his struggle to. The brilliance of the play is when you realize that Meg, her Son Tom, and her fiancé, are not part of the redemption that Gideon truly needs. While the play has circled around the love triangle, and the ongoing attempt to build a ship and redeem the industry and work of a town left destitute. The true story is hidden in the shadow’s Gideon returned to find redemption, to rediscover faith, faith that was lost when his father tried beating him down. Forcing him to a life he didn’t want. The love that can redeem him is not in Meg’s heart it is at his father’s grave. Screaming at a ghost present in his dad’s work boots, screaming at god and all the heavens, trying to fight the spirit of his dad physically, throwing punches at the air – until there is nothing left but, “ Ah,Fu*k, what now dad?“

This is what I loved most about the play, the true story was hidden. There are people out there like me who see a love triangle, and a union vs. corporation story, and know the end right away. Gideon will rally the town and get Meg to love him again, through his efforts to save her people against the evil, evil, man who helped her raise a child, and loved her, while he was gone. No, not at all. The Last ship, takes you on a voyage, so familiar, so true to the Rogers and Hammerstein classic Broadway, then sits you down and like a father to a son says, ‘but that isn’t the way the world works is it, in never lives up to those childhood romances, but there is love in it.’

“May the angels, protect us when all else fails, when the Last Ship Sails.”

Brilliant, and sure to thrill, this is not the spectacle Broadway, we have come to know since the Feline’s hit the stage. This is something new, spectacle, but with a story that truly turns you on your ear. By the end of it I was bouncing in my chair like a five year old girl who was just told Santa had replaced all his reindeer with my little Pony Pegasus, and Rainbow Dash had the lead. I was thrilled, I was amazed, and faith in the art of story was restored.