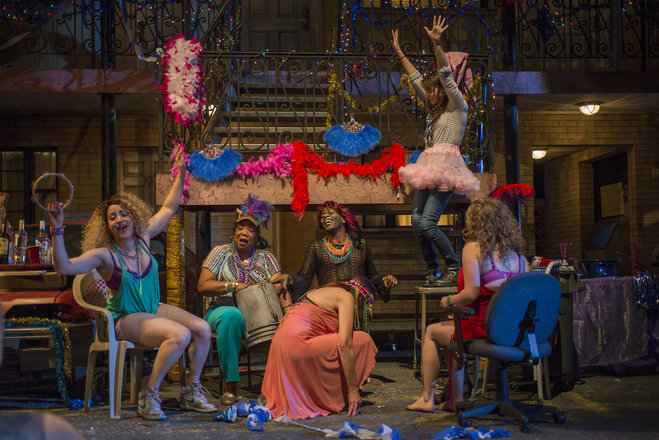 Steppenwolf Theatre Company hosts its second EXPLORE event of the season on Saturday, January 17 at 5:30pm in-between the matinee and evening performances of the Broadway-bound world premiere Airline Highway. EXPLORE events invite audiences to celebrate the ideas and themes of the play through a fun, social setting. Each EXPLORE event is a unique experience tailored to create an immersive environment that reflects the world of that play.

EXPLORE: The World of Airline Highway will feature live music provided by Four Star Brass Band, a Chicago-based New Orleans-style brass band and authentic New Orleans cuisine prepared by Blue Door Farm Stand. Performance poetry from New Orleans-based Danny Kerwick, the real-life inspiration for the character of Francis, will kick off the event. Kerwick will be joined by some of Chicago’s coolest performance poets, including Gregorio Gomez, Marty McConnell and Billy Tuggle. Participants will also have the chance to make their own Mardi Gras masks and take some photos before heading next door to the Downstairs Theatre to see Steppenwolf’s critically acclaimed production of Airline Highway by Lisa D’Amour.

EXPLORE: The World of Airline Highway will take place Saturday, January 17 at 5:30pm in Steppenwolf’s Garage Theatre, 1624 N. Halsted St. EXPLORE events are free, but space is limited. Please RSVP to reserve your spot by calling Audience Services at 312-335-1650. Round out the experience and purchase a ticket to Airline Highway on Saturday, January 17 at 3pm before EXPLORE or at 7:30pm following EXPLORE. Tickets ($20 – $82) to Airline Highway must be purchased separately through Audience Services at 312-335-1650 or steppenwolf.org. Steppenwolf also offers a special EXPLORE 25% off ticket offer only valid for the January 17 matinee at 3pm (use code 19075 when ordering).

In the parking lot of The Hummingbird, a once-glamorous motel on New Orleans’ infamous Airline Highway, a group of friends gather. A rag-tag collection of strippers, hustlers and philosophers have come together to celebrate the life of Miss Ruby, an iconic burlesque performer who has requested a funeral before she dies. The party rages through the night as old friends resurface to pay their respects. A world premiere from the author of Detroit, Airline Highway is a boisterous and moving ode to the outcasts who make life a little more interesting.

Steppenwolf Theatre Company is America’s longest standing, most distinguished ensemble theater, producing nearly 700 performances and events annually in its three Chicago theater spaces—the 515-seatDownstairs Theatre, the 299-seat Upstairs Theatre and the 80-seat Garage Theatre. Formed in 1976 by a collective of actors, Steppenwolf has grown into an ensemble of 44 actors, writers and directors. Artistic programming at Steppenwolf includes a five-play Subscription Season, a two-play Steppenwolf for Young Adults season and two repertory series: First Look Repertory of New Work, and Garage Rep. While firmly grounded in the Chicago community, nearly 40 original Steppenwolf productions have enjoyed success both nationally and internationally, including Off-Broadway, Broadway, London, Sydney, Galway and Dublin. Steppenwolf has the distinction of being the only theater to receive the National Medal of Arts, in addition to numerous other prestigious honors including an Illinois Arts Legend Award and 12 Tony Awards. Martha Lavey is the Artistic Director and David Hawkanson is the Executive Director. Nora Daley is Chair of Steppenwolf’s Board of Trustees. For additional information, visit steppenwolf.org, facebook.com/steppenwolftheatreand twitter.com/steppenwolfthtr.