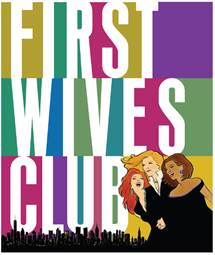 It was also announced today that legendary music arranger and producer H.B. Barnum (best known for his work with Aretha Franklin) has joined the First Wives Club creative team as Arranger and Orchestrator;Kenny Seymour (Memphis; The Wiz) will serve as Musical Director.

With a book by five-time Emmy Award nominee Linda Bloodworth Thomason and direction by Simon Phillips, First Wives Club: The Musical features new original songs and classic hits by Motown legends Holland-Dozier-Holland, including “Reach Out…I’ll Be There,” “Stop! In the Name of Love” and “I Can’t Help Myself (Sugar Pie, Honey Bunch).”

In First Wives Club, three former college friends reunite to find that they have more in common than their alma mater! Ditched by their respective husbands for younger women, they band together to settle scores with the men who did them wrong.  First Wives Club is a hilarious, inspiring, and empowering story about friendship at its strongest… and revenge at its sweetest.

First Wives Club is based on the hit 1996 Paramount feature film and the original best-selling novel by Olivia Goldsmith, and adapted from an earlier version of the musical by Rupert Holmes, with additional material by Simon Phillips.