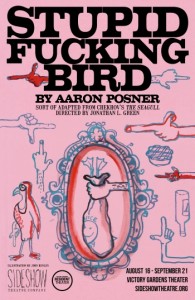 On the grounds of a country estate, two generations worth of Russians mope and love and hate and make a lot of bird-based metaphors. Sound familiar?  It’s Anton Fucking Chekhov versus the modern world in Aaron Posner’s ballsy Midwest premiere. A smash-hit on the east coast and a finalist for the 2014 ACTA Award, this heartbreakingly hilarious sort-of-adaptation of The Seagull takes a baseball bat to one of theatre’s most famous works and staunchly refuses to pick up the pieces. Sideshow’s signature energy and wit are on full display in this very funny examination of what drives us to make art and find love.

Aaron Posner’s adaptations include two novels by Chaim Potok: The Chosen, which has had more than 50 professional productions around the world and My Name Is Asher Lev, which after more than a dozen productions across the country, ran for ten months Off-Broadway in 2012/13 and won the Outer Circle Critics Award for Best New Off-Broadway Play. With Michael Hollinger he created an adaptation of Cyrano which he directed in its premiere at the Arden Theatre and which went on to win him a Helen Hayes Award as Director in its Washington, D.C. production. Other plays include Stupid Fucking Bird, which premiered at Woolly Mammoth Theatre in D.C.; Who Am I This Time? (and Other Conundrums of Love) adapted from Kurt Vonnegut stories which premiered at Artists Rep under the title And So It Goes; Third & Indiana adapted from Steve Lopez (Arden Theatre); Brief Interviews with Hideous Men adapted from David Foster Wallace (1812 Productions); and Sometimes a Great Notion adapted from Ken Kesey (Portland Center Stage). His musical adaptation of Mark Twain’s A Murder, a Mystery & a Marriage (with James Sugg) premiered at the Delaware Theatre Company and was nominated for ten Barrymore Awards and the Helen Hayes Award for Best New Play for its production at Round House Theatre.

Jonathan L. Green has directed and assisted for Sideshow Theatre, Lookingglass Theatre, Steppenwolf Theatre, Chicago Dramatists, Theatre Seven of Chicago, Pavement Group, Live Arts and the Earl Hamner, Jr. Theatre. Recent projects include The Golden Dragon, Idomeneus (Jeff Award for best ensemble), The Gacy Play, Midway Liquors, Heddatron, Theories of the Sun, Medea with Child, Everything Freezes: another winter’s tale, Dante Dies!! (and then things get weird) and Mud.  Upcoming projects include Antigonick with Sideshow next spring. Jonathan is a graduate of the University of Virginia and serves on the board of directors of the League of Chicago Theatres.

From its first production, 2008’s Dante Dies!! (and then things get weird), to its Jeff Award-winning productions of Roland Schimmelpfennig’s Idomeneus (named one of the best plays of 2012 by Time Out Chicago and the Chicago Sun-Times) and Elizabeth Meriwether’s runaway robotic hit Heddatron at Steppenwolf Theatre, Sideshow has consistently produced engaging, transcendent works across Chicago. Sideshow continues its multi-year residency at Victory Gardens in the historic Biograph Theater in the 2014/15 season.

Sideshow also produces the Chicago League of Lady Arm Wrestlers (CLLAW), a wildly popular interactive fundraising event that benefits Sideshow Theatre Company and other local charities. CLLAW has been featured in local and national press, including The Washington Post, Reuters, Penthouse Magazine and the Chicago Sun-Times and on WGN Morning News, ABC 7’s Windy City Live and CBS 2. The next CLLAW match is scheduled for Friday, July 25 at the Logan Square Auditorium. For more information about CLLAW, visit www.cllaw.org.