Side Project’s world premiere of “Sugarward” begins January 5 in rep with “lady M.” 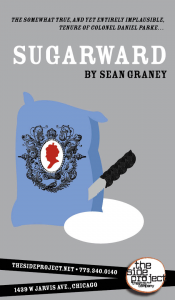 Sugarward, Sean Graney’s new play about the governor of the British Leeward Islands circa 1706, will receive its world premiere January 5, 2013, at 7:30 pm at The Side Project. Sugarward will then run Thursday through Saturday nights at 7:30pm and Sundays at 3 p.m. through February 10.

Directed by Geoff Button and featuring Joel Ewing (Livewire) and John Henry Roberts (Strawdog), the play concerns the “somewhat true and yet entirely implausible” story of Colonel Daniel Parke as he arrives for his first day as Governor. In his usual style, Graney plays fast and loose with anachronisms, according to dramaturg Michael Manocchio, but has based the show on the historical figures and realities of the time.

The following week, the company will make its first foray into Shakespeare with a new cutting of “Macbeth” titled lady M., with the text re-focused to amplify Lady Macbeth’s perspective and psychological torment. Adapted and directed by Laley Lippard, lady M. will open January 16 and run Sunday through Wednesday nights at 7:30pm and Saturdays at 4 pm through February 6.

The two plays, running in rep, are linked by their exploration of personal and political ambition, and how human nature will always get in the way, according to Artistic Director Adam Webster.

Tickets for each show are $20 general; $15 senior/students, and can be made through www.thesideproject.net. More information can be obtained online or by calling the theatre’s new phone number: 773-340-0140. Press comps or interview requests can be arranged through Artistic Director Adam Webster at 773-600-1117.

The two plays continue the company’s aesthetic of presenting rich and inventive language, as well as the language between plays, akin to last season’s ambitious slate of two, three-show rep productions.

“I am so thrilled to present these two plays, both of which, at their core, deal with the power of corruption and the corruption of power,” Webster said. “It is especially exciting to do so in January, as we enter the inauguration of a second term of the Obama Administration, the political climate being the central tenet of Graney’s latest play.”

“I think Sugarward will be much less likely to polarize,” Webster surmised, “which is surprising given the partisan state of politics right now. So, I could be wrong. However, it is safe to say it will divide folks ideologically, instead of viscerally (as the earlier play did).”

About the side project

The side project connects Chicago’s most innovative and engaging writers, directors, designers, and performers in an ongoing exploration of the power of hyper-intimate theatre. Our focus is not simply on world-premiere plays, but on world-premiere collaborations: creating never-before-seen teams of artists, each of whom has a body of work which speaks to the others in unique and exciting ways.

Over its 12-year history, the side project has presented more than 60 productions, including 40 full-length plays (featuring 24 world premieres, three of which were subsequently published), 15 one-act festivals (featuring 100 plays – including 66 world premieres), four sketch comedy shows, and a community-based Storytelling festival. For its work, the side project received the 2006 Spirit of Rogers Park Award and the 2009 Broadway in Chicago Emerging Theatre Award, and Artistic Director Adam Webster was named one of PerformInk’s “Top 25 Artists Making a Difference” (2004) and New City’s “Top 50 Artists Making Chicago Theatre Work” (2009).