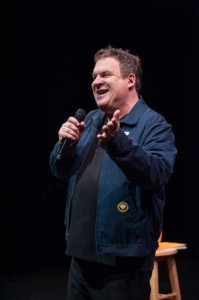 Watching Jeff Garlin weave his way through the material of his new show “Closer Than I Appear” you quickly come to one conclusion; that there is no better stand-up comedian working in the industry today.    From the moment Garlin takes the stage at the Steppenwolf Upstairs Theatre, there is an instant comradery between the audience and performer, which allows him to create a different show every night.   Mr. Garlin trusts the audience and the audience trusts him. In the world of stand-up, that is a very rare commodity.

“Closer Than I Appear” shows Mr. Garlin coming off a crossroads of sorts.  Garlin’s last appearance in Chicago was two years ago in “No Sugar Tonight” and his success on television, movies and stand-up in some ways caught up with him health wise.  Now, Mr. Garlin has embraced a healthier lifestyle which includes a very noticeable weight loss and transcendental meditation that also translates to an on-stage calmness in which time seems to flash by.   In fact, on the night I attended, Mr. Garlin’s act which is timed to run an hour and fifteen minutes, was nearly two and a half hours long, and even at that point the audience wanted him to stay.  And why not?  We were schooled on some very important matters including; why red loafers on a man are a no go;  the importance of having a lesbian BFF; what a strip mall would be like if owned by Mr. Garlin (of note is the Harpoonery Restaurant where all food is caught by harpoons) and of course the difference between creams and lotions.

More than anything though, Mr. Garlin is in love with Chicago and Chicago is in love with him.    From references to his friend Tracy Letts as well as pointing out what critics usually comes to review his act, Garlin puts forward a Chicago-centric show that oozes with the comfortableness of having him living amongst us.

In closing I must say that Mr. Garlin is more akin to a lotion than a cream.   Ponder that one for a while.

Performances of Closer Than I Appear are Tuesday through Sunday at 8pm, through December 16, 2012 in Steppenwolf’s Upstairs Theatre (1650 N Halsted St). The performance on December 14 features American Sign Language interpretation. Tickets ($25) go on sale Thursday, November 8 at 11am through Audience Services (1650 N Halsted St),312-335-1650 and steppenwolf.org. A limited number of $15 student tickets are available online using promo code “GARLIN15”. Limit 2 tickets per student; must present a valid student ID for each ticket.  For calendar information please visit www.theatreinchicago.com