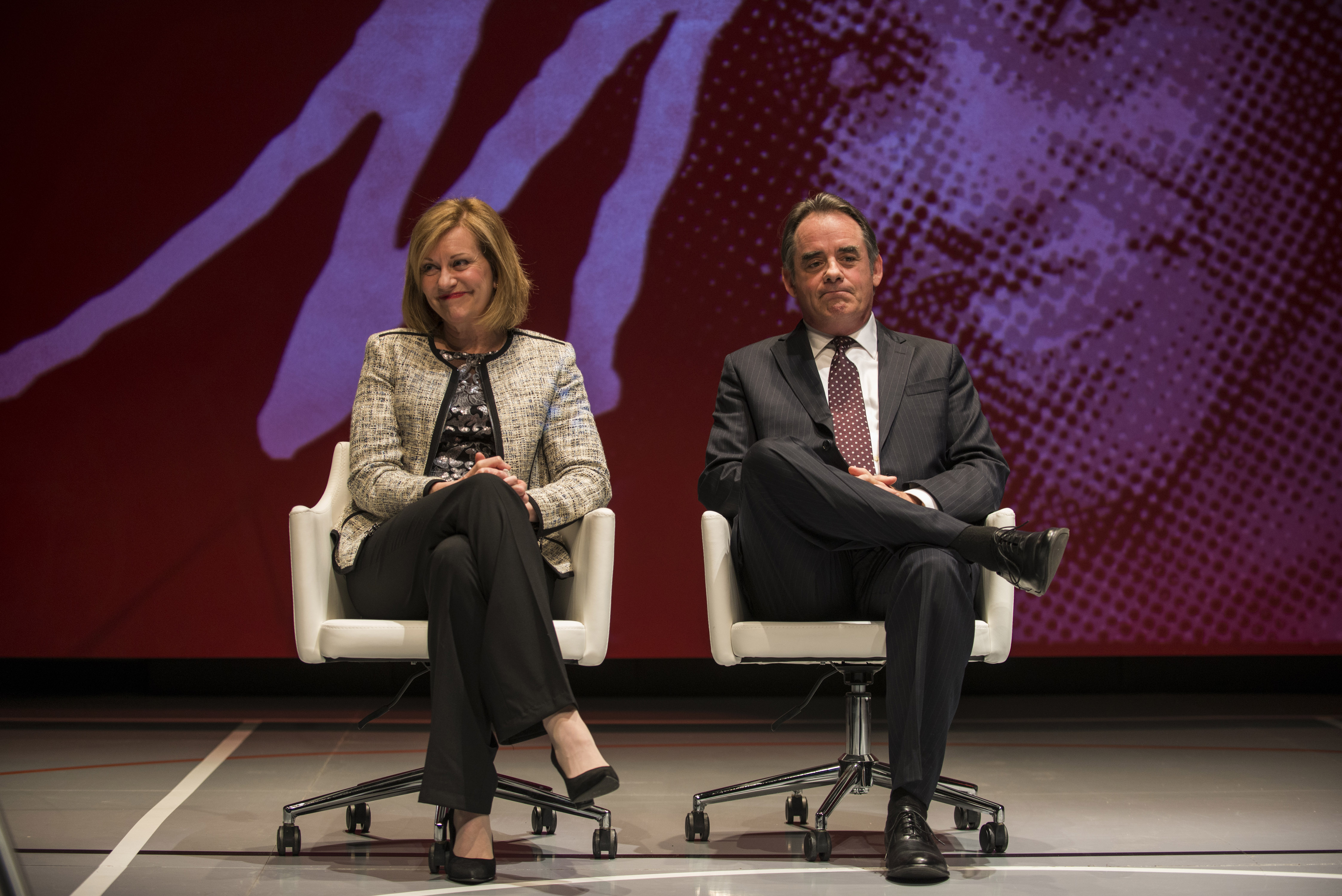 Politician Bill Pulver faces the cameras to stumble his way through a carefully crafted apology as his wife Judy stands stoically behind him…but what is she REALLY thinking? We are about to find out in Bruce Norris’s wickedly funny, unpredictable play about a marriage burst apart by a sex scandal. Domesticated is a scathing, wildly entertaining play that investigates gender politics, modern marriage and the sexual mysteries of the animal kingdom.

“We have a civilized agreement, and a reasonable one, that says we can’t behave the way some of our animal cousins do. I think that this idea—that everything that men instinctively want, on a primitive level, is basically bad and everything women want, basically good—is how we’ve constructed our present morality, based on gender,” shares writer, director and ensemble member Bruce Norris. “We see women as a civilizing force—the things they want lead to social stability and the things men want lead to chaos and destruction. I don’t know if that’s true or false, but it’s present in how we currently talk about gender.”

The cast features ensemble member Tom Irwin as Bill Pulver and Mary Beth Fisher as Judy Pulver along with Emily Chang (Cassidy), Esteban Andres Cruz (Woman in Bar), Meighan Gerachis (Pilar, Judge and others),Rae Gray (Bartender, Becky and others), Beth Lacke (Bobbie), Mildred Marie Langford (Talk Show Host and others), Melanie Neilan (Casey), Meg Thalken (Shrink, Ed, Pat and others) and Karen Janes Woditsch(Jackie, Patient and others). Irwin has been an ensemble member since 1979 and performed in more than 50 Steppenwolf productions, including The Grapes of Wrath, Balm in Gilead and The Seafarer. Fisher, a frequent performer at Goodman Theatre, most recently in Vanya and Sonia and Masha and Spike, last performed at Steppenwolf in Dead Man’s Cell Phone in 2008.

Domesticated was originally commissioned and produced by Lincoln Center Theater in 2013.

Steppenwolf Theatre Company is America’s longest standing, most distinguished ensemble theater, producing nearly 700 performances and events annually in its three Chicago theater spaces—the 515-seat Downstairs Theatre, the 299-seat Upstairs Theatre and the 80-seat Garage Theatre. Formed in 1976 by a collective of actors, Steppenwolf has grown into an ensemble of 44 actors, writers and directors. Artistic programming at Steppenwolf includes a five-play Subscription Season, a two-play Steppenwolf for Young Adults season, First Look, a new play development series and Visiting Company engagements. While firmly grounded in the Chicago community, nearly 40 original Steppenwolf productions have enjoyed success both nationally and internationally, including Off-Broadway, Broadway, London, Sydney, Galway and Dublin. Steppenwolf has the distinction of being the only theater to receive the National Medal of Arts, in addition to numerous other prestigious honors including an Illinois Arts Legend Award and 12 Tony Awards. Anna D. Shapiro is the Artistic Director and David Schmitz is the Managing Director. Nora Daley is Chair of Steppenwolf’s Board of Trustees. For additional information, visit www.steppenwolf.org,facebook.com/steppenwolftheatre and twitter.com/steppenwolfthtr.