Sandys and Brennan Command The Stage in Remy Bummpo’s “Pygmalion”

The play, which was the basis for Lerner & Lowe’s My Fair Lady, Pygmalion is inspired from the Greek myth where the sculptor Galetea falls in love with his sculpture Pygmalion, who then springs to life. George Bernard Shaw, an Irish, literary revolutionary, decided to use this Greek myth as a vehicle to take on the English class system when he created the characters of Eliza Doolittle, (written for the famous British actress Mrs. Patrick Campbell with whom he carried on a decades long love affair) and Professor Henry Higgins (Shaw himself). Higgins believes that one can change their station in life through adopting proper speech and manners. His experiment is largely successful in that Eliza gains her independence through his teaching and leaves him after the experiment is over. Although at times I missed the music from My Fair Lady I also enjoyed some of the important dialogue between Eliza and Higgins that had to be cut because of the long running time of the musical. Shaw’s play feels remarkably current and extremely entertaining. 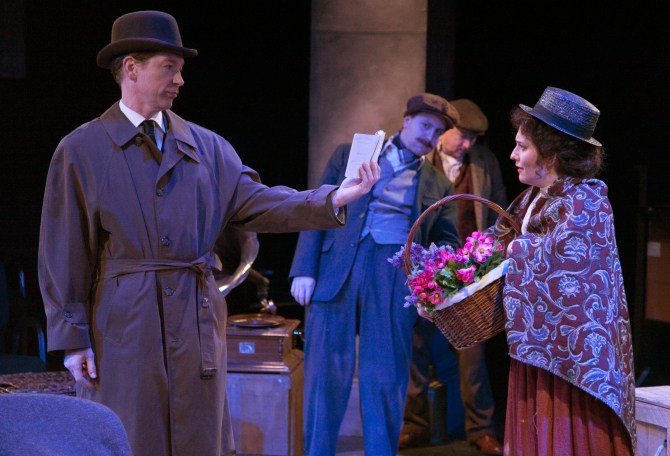 Remy Bumppo’s current production of Pygmalion has taken some great liberties with Shaw’s original script; some aid and some detract. Under Shawn Douglass’ direction much of Shaw’s altered script pops to life with urgency and passion. He has cut down the script and focused on the main characters, a wise choice given the small performing space and multi-scenic design it would require. He has also injected into the original script an older Eliza Doolittle who returns to Higgin’s home after his death to reminisce. Therefore the entire action is a flashback in her memory. Although I am not a fan of revising original scripts, as a Director myself I understand the necessity for keeping the action moving while changing the locations. I also think it a wise decision to stage it in the round, reducing the scenery and establishing a sort of boxing ring for Higgins and Eliza. There is no doubt that the focus of Remy Bumppo’s Pygmalion lies more in the acting than the design (which is shabby to say the least)

The drawback with editing a script is that we lose the author’s original intent which is shifted to that of the Director’s viewpoint, losing much of the scope of the writer and thereby minimizing the story. I applaud Remy Bumppo for even tackling Pygmalion which has been overshadowed and almost eliminated by the popular musical version, My Fair Lady.

There is no question that Remy Bumppo selected Pygmalion as a vehicle for Artistic Director Nick Sandys (who the role of Higgin’s fits like a fine lambskin glove) and ensemble member Kelsey Brennan (one of the finest Eliza’s I have seen, with an uncanny resemblance to Mrs. Patrick Campbell). Both of these superb actors possess the correct chemistry and skill crucial to the success of the play; they are equally matched. Having seen Nick perform Higgins twice in Light Opera Works productions of My Fair Lady I felt that on opening night that for the first half hour he was forcing his performance. However as he settled into the role and began to have fun his Higgins once again sprang to life and he was captivating. In fact Nick Sandys has matured into a fine actor who is at the zenith of his craft.   Kelsey Brennan commanded the stage from her first entrance and has a presence that keeps your eye and attention focused primarily on her. She and Nick Sandys stalked each other like black panthers and, with surgeon like precision delivered Shaw’s razor sharp dialogue.

Another standout was ensemble member Annabel Armour as Mrs. Higgins (a great casting choice). Possessing a natural, regal grace Annabel fits into Mrs. Higgin’s skin as if tailor made for her. My only criticism is that she picks up the speed of her delivery as much of her comic timing misfired and seemed sluggish. Musically many of her lines require the rapid-fire, razor sharp delivery of Higgins (after all she is his mother).

Joanna Riopelle was lovely and funny as the flighty Mrs. Eynsford-Hill, with just the right blend of regality and flightiness. As her daughter Clara, Eliza Helm was pitch-perfect and petulant, looking right out of the Edwardian era.

Laurie Larson’s Mrs. Pearce is another standout in this production, bringing a maturity and exasperated strength to the role which Shaw would have been very pleased with.

David Darlow’s Alfred P. Doolittle seemed unsteady and self-conscious on opening night, going up on several of his lines. Hopefully he will be become more confident during the run of the production.

Although Pygmalion is set within the opulent Edwardian era of 1912 the design elements of the production looked more like the Salvation Army of the 1930s. The set design by Jacqueline and Richard Penrod was lacking in any wealth or class (which is vital as this play is a study of the class system with the lush settings acting as the backdrop).

Kristy Leigh Hall’s costume design likewise lacked the fastidious detail associated with the Edwardian era; women were noticeably lacking hats, jewels and overall abundance while the men’s suit tailoring seemed non-existent. However Ms. Hall’s actual detail within the women’s dresses was exemplary and I wish it would have been carried through the entire design (Eliza’s dress for her first outing was particularly splendid).

Since theatre is a powerful teaching medium it is vitally important to get the period details correct and establish the world of the play when much of your audience are not historically informed. With the trend in the arts of wanting to rewrite history it is important to maintain integrity and let the universality of the piece shine through.

Pygmalion runs Wednesday – Sunday through January 8th, 2017 at the Greenhouse Theater Center, 2257 N. Lincoln Avenue. Season Subscriptions and tickets are now on sale at www.RemyBumppo.org or by calling the Greenhouse at 773-404-7336. Ticket prices: $42.50 – $52.50.   Parking is available in the LAZ lot adjacent to Mrs. Green’s Natural Market (555 West Webster Avenue) for $4.00 and the Lincoln Garage (former Children’s Memorial Hospital Parking Garage) for $6.00. Credit Card only.