The holiday season is not complete without the perfect music to accompany it.  “Broadway’s Carols for a Cure” is the latest compilation album that embodies the spirit of the season like nothing else can.  A project born completely out of love, “Broadway’s Carols for a Cure” pairs the casts from famous Broadway musicals with songs that are both classic and new.  The result is pure gold that will make you reach for the “repeat” button over and over again.
Broadway Cares/Equity Fights AIDS is “Broadway’s incredible, dedicated nonprofit organization that helps individual people with serious illnesses such as AIDS and women’s health issues receive the health care and support they need.  In addition, they provide financial support in the form of grants to AIDS and family service organizations throughout the country,” according to “Broadway’s Carols for a Cure” producer Lynn Pinto. 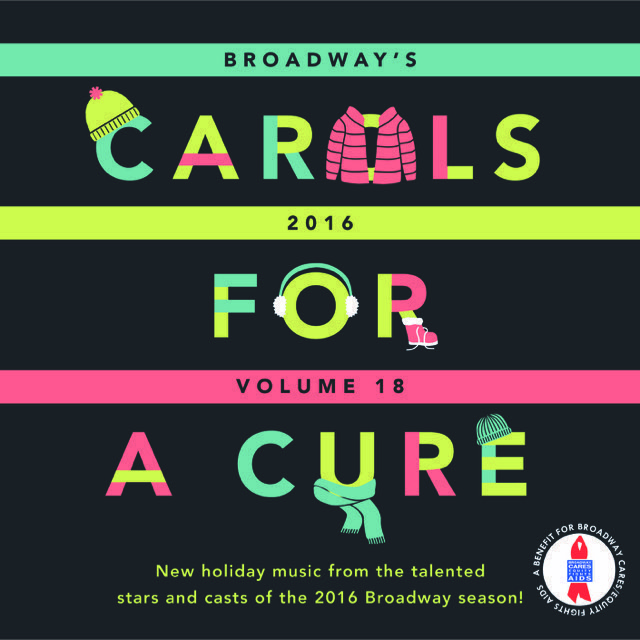 With a jaw-dropping list of all the most popular musicals, each production company is allowed the creative freedom to choose their contribution.  Instead of the typical live singing the artists are used to, they’re provided with intimate studios that allow for vocal and instrumental isolations.  This makes the album unique from the majority of cast albums on the market, and showcases some of the best voices and instrumentalists in the world.
After 18 years of experience, you can imagine that producer Lynn Pinto and engineer Andros Rodriguez know how to create perfection.  The production team they work with is passionate and relentless in their pursuit of the ideal sound.  After listening to several seconds of any track, it becomes very clear that “Broadway’s Carols for a Cure” is magical.
Some of the most notable songs on the album include:
Those are just 6 of the 22 highly detailed tracks that you will hear, along with:
And the list still goes on and on.  The only way to immerse yourself in the beauty and love “Broadway’s Carols for a Cure” exudes is to listen to it in its entirety.  It will envelop you with warmth, like a cozy blanket on a snowy Winter’s day.
You can purchase “Broadway’s Carols for a Cure” at most all Broadway musicals and is available now at participating Broadway Shows through December 4th, and for online purchase at www.broadwaycares.org.  Previous volumes are also available for purchase there and at www.itunes.com.