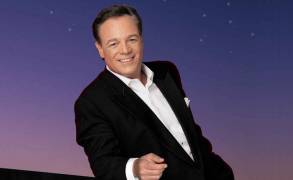 One of Chicago’s favorite entertainers, Ron Hawking, will appear at Drury Lane Theatre, 100 Drury Lane, on Monday, December 17 at 1:30 p.m. and 7:30 p.m. for the His Way for the Holidays concert and at Theatre at the Center, 1040 Ridge Road in Munster, Indiana, on Monday, December 31 at 6:00 p.m. and 9:00 p.m. for the New Year’s Eve Copa Chicago concert. Known for his critically acclaimed runs of His Way – A Tribute to the Man and His Music and Ron Hawking Celebrates… The Men and Their Music at Chicago’s Mercury Theater, Ron Hawking has an uncanny ability to reinterpret a song and redeliver it with the same vocal charm and charisma that made the original artists so beloved.

In His Way for the Holidays at Drury Lane Theatre, Ron Hawking weaves in and out of the Sinatra songbook with the best songs of the season, including “The Most Wonderful Time of the Year”, “Have Yourself A Merry Little Christmas”, and “The Christmas Song”. Treasured holiday memories are shared in Ron's “Impressions of Christmas” as Bing Crosby, Nat King Cole, Natalie Cole, Jose Feliciano, Elvis and Ray Charles. The show also features cameos of the infamous “Rat Pack” and

The performance schedule for the His Way for the Holidays concert at Drury Lane Theatre is Monday, December 17 at 1:30 p.m. and 7:30 p.m. Tickets are $50 for each performance. Lunch and dinner packages are available from $65-70. For reservations, call the Drury Lane Box office at630.530.0111, call TicketMaster at 312.559.1212 or visit www.ticketmaster.com orwww.drurylaneoakbrook.com.