Red – A Study in Pretentious Art 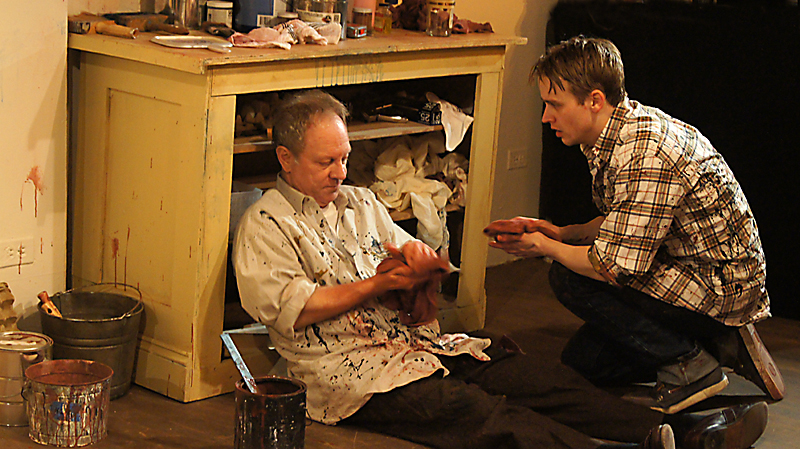 John Logan’s study of artist Mark Rothko, Red (winner of six Tony Awards, including Best Play) is an honest and searing look at the role art plays in our lives, why people collect it and its subjective nature. Logan examines the pretentiousness and self-absorption of the modern art movement and presents a not-too-flattering, but honest, look at master abstractionist painter Mark Rothko (portrayed by long-time Redtwist company member Brain Perry) and his recent commission to do a series of murals for the Four Seasons restaurant in New York; his largest commission to date.

Rothko hires a fresh grad assistant Ken (played by Aaron Kirby) to stretch his canvasses, mix his paints and cater to his demanding needs so he can “create”. Throughout the course of two years span of the play we are subjected to Rothko’s incessant instructions on how art should be perceived, who should collect it and, unfortunately, who does. Ken, who walked in on the murdered bodies of his parents, has a special relationship to the color red, the predominant color in Rothko’s works, and tries to offer his advice as an artist to the master, but is consistently demeaned and reminded that he is there as a servant who has not earned the right to express his artistic opinions. Their relationship is parent-child and student-teacher.

Logan’s play is highly insightful, very dry, funny and thought-provoking. He crafts the speech in a rhythmic, musical manner which the actors generally capture but fail to modulate resulting in a repetitive delivery that becomes tedious.

As Rothko, Brian Parry delivers a solid performance as the self-obsessed, highly egotistical and insecure master artist. Even though I never believed that he was the son of Russian-Jewish immigrants he captured the angst, emotional volatility and self-absorbed passion of Rothko. I did find the self-absorption a bit tedious at times, especially in the LONG scene changes where it stops the momentum and action of the play (I fault the director with this one) but Parry possesses the dry, brittle delivery that fires the sardonic humor in Logan’s play. He is a solid actor and when cast in a role which suits him, does a fine job.

As the grad student Ken, Aaron Kirby brings the passion of youth and angst. His 2-year evolution of Ken beginning as a shy, insecure boy becoming an out-spoken and angry artist is compelling. However he needs more variety in the vocal levels and colors of his performance (another directorial issue). He and Parry have a nice chemistry between them which makes the relationship highly believable and a fine study of the generational gap, changing tastes of the millennials and the young lion waiting in the wings for the old one to become weak. Kirby is an engaging actor and, in the right role with stronger direction has the ability to show the full breadth and depth of his craft. I think he is evolving into a fine actor and I enjoy his performances.

Much like Rothko’s work, director Steve Scott focuses on the primary colors. When you are dealing with a script that is repetitive in nature, as this one is, you need to paint in a multitude of colors which can shift mood and enhance the nuances of the irascible subject. Logan’s brilliant script is rife with beautiful and censorious language which reflects his subject but is as fixed in repetitive speech patterns as its subject is in his lonely world of twilight which, if not broken up, will sap vitality and its throbbing life force.

This is a timely play which is worth seeing. RedTwist, as a theatre company, does consistently fine work in a space where you feel like you are eavesdropping on something you should not. Red runs through March 8th, Thursdays through Saturday at 7:30pm and Sundays at 3:00pm. Tickets available at www.redtwist.org or call 773-728-7529.