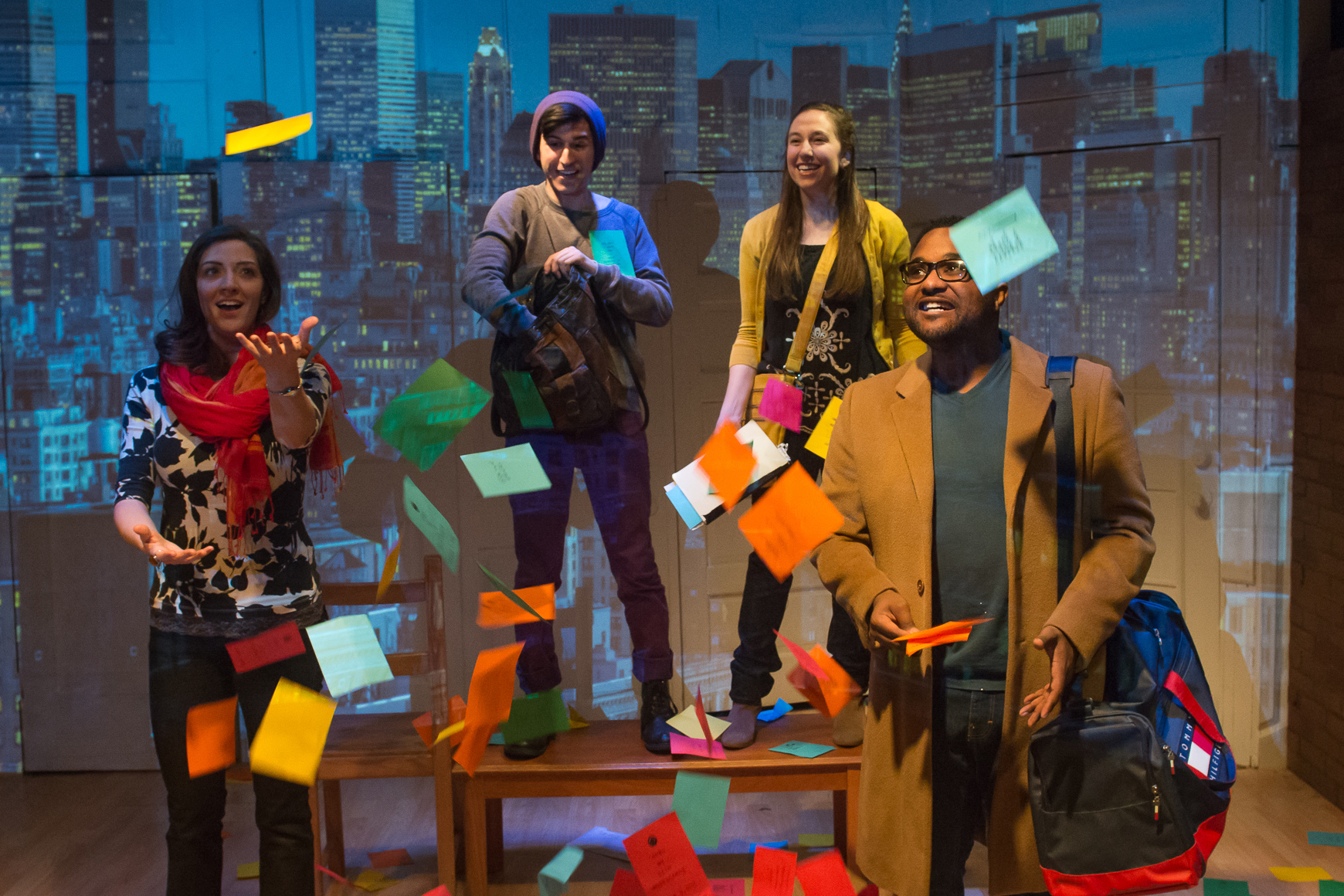 Highly Recommended  Theatre In Chicago Review Round up

Adam Gwon’s musical Ordinary Days, now in an outstanding production at Boho Theatre in Rogers Park, is a refreshing look at love and the millennials in New York City, a place of broken dreams and transitory relationships. People meet, fall in love and fall apart in the course of 90 minutes in the highly intimate space of the Heartland Café. Gwon , one of the most exciting new composers to come along has the potential to take a place next to Sondheim if he continues to turn out music like he has in Ordinary Days. His music has the complexity of Sondheim and the clever lyrics of Cole Porter. Ordinary Days is more of a musical landscape presented in vignettes and songs with little spoken dialogue which provides a realism and draws us into a very believable world.

At heart, Ordinary Days tells the story of four ordinary people discovering that if you dig beneath the surface, you can find the extraordinary. When cynical Deb loses her most precious possession – the notes to her thesis-she unwittingly starts a chain of events that leads four New Yorkers discovering that their dreams, passions and struggles are anything but ordinary. Told though a series of intricately connected songs and vignettes, Ordinary Days is an original musical for anyone who’s ever struggled to find a meaningful connection in a city that seems overwhelming.

From the moment the show began time seemed to fly and it was over before I knew it (a really good sign).   Warren, a funny and dorky gay guy who is an artist trying to find his voice and audience (played by the extremely talented Nick Graffagna) has the opening number “One By One By One” which is reminiscent of Sondheim’s number from Company “Another Hundred People Just Got Off of The Train” sets the tone and introduces us to the four characters: Deb, a college student who loses the notes for her thesis, (a superb turn by Hannah Dawe), Clare , a brand new transplant to Manhattan (a poignant performance from Courtney Jones) and her new love Jason (the dynamic Demetrius Spidle). Claire and Jason have set up house and are finding that the initial attraction is slipping away and they may not really be suited to one another.

Boho, who has been trying to get the rights from Gwon to produce this play for four years, has, with the expertise of director Jason A. Fleece, assembled a talented group of artists who have created something magical in their tiny theatre space. The four actors are truly superb (and that is not a word I use much) and create an ensemble of characters that you deeply care about who make you laugh and cry; they are in command of the piece and their performances.

Fleece’s direction is seamless and, much like the description of the Monet painting referred to in the piece, comprised of a series of dots that blend together to form a masterpiece. And this is a masterpiece. As a director he possesses a simplicity and focus which brings the story to life and guides us as the audience, where he wants us to be.

I am always amazed at the scenic designs when I see a Boho production and Patrick Ham’s design for Ordinary Days is no exception. It is comprised of white doors of different kinds which act as a backdrop for the magnificent projection design by Anthony Churchill, who sets each location with static and video projections in a flawless manner (the several taxi rides are really great to experience). Cassy Schillo’s prop design is detailed and correct and Justin Castellano’s lighting design sets the right moods which are important for this kind of piece.

In the end it is the sum of the pieces that make up the whole which determines the success or failure of a work of art and Boho’s jewel Ordinary Days, is a success on all levels and one that you SHOULD NOT miss. I imagine that with only thirty-one seats this ticket will be in demand so book now if you hope to glimpse this special valentine from Boho.