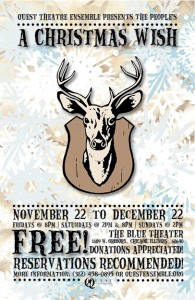 Last year when I saw the Quest Theatre’s “A People’s Passion Play”, I was totally captivated and astounded by the talent and the uniqueness of the experience of the production. Being my first Quest Theatre Ensemble experience, and I have to say it was original, very well directed, and performed fabulously by the ensemble. I am happy to say that “ The Peoples A Christmas Wish” doesn’t disappoint.

The story of “The People’s A Christmas Wish” features Quest’s signature large-scale puppetry, a fabulous well written musical score, and plenty of holiday fun for the whole family.

The story begins with Jane Doe who is singing this wonderfully hilarious song titled “Every Magic Cent”. The song is about her story not being about the happy endings of a Disney production. Therefore, she is suing Disney for not delivering her the happy ending. One of the great lyrics written by Scott Lamps (Composer) and Andrew Park, (Writer- Director) is “I never get the slipper but I always get the slip,” is very clever and extremely funny. In fact, the entire production is very well written and interestingly funny adding a lot of identifiable innuendos and quips. The story moves to Tom’s Taxidermy shop with all of these stuffed animals on the was in the shop which include a beaver, a fish, a bear, a goat a turkey, and two sets of deer hooves. Tom enters the shop with a reindeer head that is mounted, that he got on e-bay, which he names, E-Bay. When Tom leaves on Christmas Eve, magic happens and all of the stuffed animals come alive. Every Christmas Eve, the magic of life is brought to these animals until midnight, where they fall asleep until the next year. Upon waking up from their year’s nap, they notice a strange addition to the wall. They later learn that E-bay is actually Dasher, one of Santa Clause’s eight reindeer. (I admit it is a little dark for Christmas, but the story has a message.) All seems hopeless when Dasher finds himself separated from Santa and mounted on a wall in a taxidermy shop. He also longs for his lost love, Jane Doe. At first, the other animals refuse to talk about their lost dreams and loves but we later learn about their lives through song and great lyrics. We learn through Dasher he had to choose between Jane Doe and his vocation of working with the reindeer team and with Santa Claus. All of the animals in the shop are looking for a genuine Christmas miracle. Dasher and his new animal friends hope for the impossible against incredible odds. Their story is each brought out in song and dance in human form.

I have to say that I loved this story which has the message that everyone should follow their heart. I love the production, I loved the music, lyrics, musicians, and cast. It is truly a great production from this fine theater. In my opinion it is a must see for the holidays. Unfortunately, my big concern was that the on-stage costuming should have better depicted for the animals the actors are portraying. I have to admit I was confused with some of the transitions. I spoke of Jane Doe earlier. Jane is portrayed by the lovely Molly LeCaptain. Molly enters the stage in an 18th century peasant attire. The audience has no indication that she is a reindeer until later in the performance. All of which may be ok, if the transition soon happens. However, when the rest of the animals are portrayed through music and dance on stage, most of the costuming did not depict their characters hanging on the wall in the shop. The Beaver, Vince Lonergan, had the bucked teeth, and the Goat, Kirk Osgood had the billygoat beard. Other than that, most of the characters were not adequately portrayed. The entire cast wore 18 century garb which really made little sense with the production. As a 50 something man, I was confused, so I could only imagine how confusing it was for some of the children in the audience. It is really a shame because this production is wonderful in every way and it is extremely enjoyable. However, Costumer Emma Weber making it a little simpler, took a back seat to her creativity. I am not saying that the stage portrayals should be in full animal garb. However, create the same illusion or personality of each characters hanging on the wall. Emma got it somewhat right with the Beaver, and the Goat, and even the Goat’s Dancers, but totally missed it with the rest of the production. I am really surprised that Andrew Park permitted this to happen. He has a fabulous show, with great actors, singers, musicians, and dancers. He has a wonderfully written script and music. Unfortunately, in my opinion, the costume issue should be corrected, to make this theater creation superb.

“The Peoples A Christmas Wish” is a wonderful production. The music is catchy and contemporary, the puppets are quirky and witty, and the show is both absurd and magical. I cannot say enough about this wonderful production. I really can’t believe it is free. Donations are strongly encouraged and in my opinion should be given by an appreciative audience for this excellent production. Even though, the Quest Theatre Ensemble has support from the community, personal donations are extremely necessary to keep this group alive, with the ability to continue to provide free productions in the future. I strongly recommend “The People’s A Christmas Wish” and I look forward to seeing many more Quest Theatre Ensemble productions in the future. It is entertainment for the entire family. Which by the way, I was a little nervous in seeing a group of 4-6 year olds in the first row. However, they were equally entertained and converted to little quiet angels. “The People’s A Christmas Wish” is sure to delight the entire family with its memorable music and puppetry, and is suitable for all audiences of all ages. It is truly a Christmas Miracle!

“The People’s A Christmas Wish” is appearing through December 22, 2013 Fridays at 8:00 p.m., Saturdays at 2:00 p.m. and 8:00 p.m. and Sundays at 2:00 p.m. All performances take place at The Blue Theater, 1609 West Gregory 60640 All Quest shows are FREE of charge while donations are greatly appreciated Reservations are highly recommended! Free parking is provided in a lot north of the theater; additional street parking is available Tickets/information: visit www.questensemble.org, email reservations@questensemble.org or call 312-458-0895