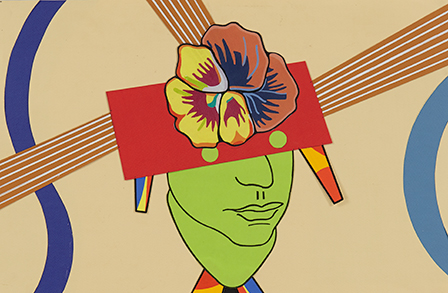 Poetry Foundation’s winter/spring 2015 events season ranges from a screening and discussion of David Grubin and Bob Holman’s film about lost languages to a theatrical performance of the poems of playwright August Wilson to a talk by former NEA chair Dana Gioia.

“All of our poetry programming this season,” says Poetry Foundation President Robert Polito, “whether a lecture by Terrance Hayes, a dance performance by Ian Spencer Bell, or a night of poems and film with Richard Blanco about an all-girl orphanage in Honduras, ultimately dramatize for a public audience the intimate imaginings that compel a form of life into urgent and beautiful language.”

Join us for ongoing programs such as the monthly Open Door Readings, which mix emerging and established poets from Chicago’s great writing programs, and the weekly Wednesday Children’s Poemtime. Be sure to also visit the Poetry Foundation gallery for art exhibitions featuring Trevor Winkfield, Cheryl Pope, and The Chicago 77, a collaborative poem drawn together from Chicago’s 77 community areas by Fatimah Asghar, Krista Franklin, Fo Wilson, and Jamila Woods.

The following events are free and open to the public on a first come, first served basis. These fall events take place at the Poetry Foundation, 61 West Superior Street, Chicago, unless otherwise specified. More information about our events is available at poetryfoundation.org/programs/events. Images are available upon request.

Join Richard Blanco, the fifth inaugural poet of the United States, Brad Coley, director of the forthcoming documentary Las Chavas, and Cheryl Chapman, executive director ofOur Little Roses, the only all-girl orphanage in Honduras, for an evening of poetry and film at the Poetry Foundation. The program features a reading and a screening of an excerpt from the documentary about the lives and work of Our Little Roses.

Drinking Gourd: An Evening of Poetry and Music

Celebrate Willie Lin, the winner of this year’s Drinking Gourd Poetry Prize, a first-book award for poets of color. Lin’s poems have appeared in Bone Bouquet, Cincinnati Review, Washington Square Review, and other journals. Judge Chris Abani has received a Guggenheim Fellowship, among many honors, and is currently a Board of Trustees Professor of English at Northwestern University. The evening includes a performance by composer, producer, and double bass player Tatsu Aoki.

Language Matters with Bob Holman: A Celebration of Mother Tongues

There are over 6,000 languages remaining in the world. We lose one every two weeks. Language Matters with Bob Holman, a film by David Grubin asks: What do we lose when a language dies? What does it take to save a language? In anticipation of the film’s airing on WTTW, join Grubin and Holman, along with poets Peter Cook and Parsino Carlos Peynetsa, for an evening of performances, film clips, and discussion about endangered languages.

Presented in partnership with WTTW, Language Matters is a co-production of David Grubin Productions Inc. and Pacific Islanders in Communications. Produced in association with the Endangered Language Alliance. Major funding provided by the National Endowment for the Humanities with additional funding provided by the Corporation for Public Broadcasting, the Arthur Vining Davis Foundations, the National Endowment for the Arts, and philanthropic individuals.

The Harriet Reading Series features talks, performances, and readings by poets whose work has appeared on Harriet, the Poetry Foundation’s blog. The series presents both established and emerging poets whose writing finds innovative approaches to the craft of poetry. Jennifer Tamayo, author of multiple books of poetry, is a Colombian-born transnational artist and activist based in New York City.

Champions from Chicago high schools recite classic and contemporary poems for the chance to represent Illinois at the Poetry Out Loud National Finals in Washington, DC, in April. Last year more than 365,000 students around the country competed for more than $100,000 in scholarship awards and school stipends.

Love, What Language Do You Speak?

Please join an international gathering of cultural organizations for a multimedia, multilingual evening of poetry, music, film, and theater in celebration of Valentine’s Day.

In this performance, based on Margaret Atwood’s novella The Penelopiad, Odysseus’s dutiful wife Penelope takes center stage to do some of her own story-making but must endure periodic choral interruptions and cheeky observations from her 12 maids, who were put to death upon Odysseus’s return.

Co-sponsored by the Lost Geneva Project

Michael J. Miles, one of America’s greatest clawhammer banjo players, is an avid fan of poetry in performance. Join us for a joyful session of live banjo, participatory poems, rhyming games, and some do-it-yourself troubadouring. This special performance will include poems and songs by Dr. Seuss, Ogden Nash, Shel Silverstein, Bob Dylan, and others.

From Senegal to Seeger

Ian Spencer Bell writes and choreographs simultaneously, often relying on the music of his poetry to locate an emotional force and guide the rhythm of his movement. In this program, Bell dances Geography Solos, three short talking dances about dislocation, and a new work, not yet titled, based on memories of his childhood home in rural Virginia.

Over the past five decades, Robert Adamson has produced 20 books of poetry and three books of prose. Adamson has won all the major Australian poetry awards, including the Christopher Brennan Prize for lifetime achievement, the Patrick White Award, and The Age Book of the Year Award for The Goldfinches of Baghdad (2006). His most recent book is Net Needle (2015).

August Wilson: From Poet to Playwright

Although best known for his “Century Cycle”of plays detailing the African American experience in each decade of the last century, Pulitzer Prize winner August Wilson began his writing career as a poet. As part of Goodman Theatre’s six-week celebration of his life and career, the Poetry Foundation is pleased to present a special program of Wilson’s poetic writings.

Terrance Hayes speaks as part of the spring Bagley Wright Lecture Series on Poetry. The series seeks to provide leading poets with the opportunity to explore in depth their own thinking on the subject of poetry and poetics. A selection of poems by Etheridge Knight will be the basis for Hayes’s discussion exploring the relationship between creativity and constraint.

In this special performance honoring the great poets World War I produced and those whose lives it snuffed out, Northwestern University theater students, led by Linda Gates, present the work of familiar writers, such as Wilfred Owen, Rupert Brooke, and Isaac Rosenberg, along with those less well known, including Eleanor Farjeon, Muriel Stuart, and the nearly forgotten African American poets who both served and died in the war.

Join editors Kevin Coval, Nate Marshall, and Quraysh Ali Lansana to celebrate the release of The BreakBeat Poets: New American Poetry in the Age of Hip-Hop, the first anthology of its kind. Spanning four decades and representing diverse scenes from across the country, the BreakBeat poets are the real-life documentarians of the late 20th and early21st century, employing traditional and wild-style poetics to narrate a new country and city landscape.

Celebrate National Poetry Month with a delightful open house just for kids at the Poetry Foundation Library. This special weekend event will feature a variety of performances, interactive activities, and poetry-related crafts for children up to 13 years old.

Haki Madhubuti will introduce a reading by Kelly Norman Ellis, Calvin Forbes, Angela Jackson and Roger Reeves. The event, which will include music and a reception, is co-presented by the independent biannual literary magazine Fifth Wednesday Journal.

Internationally acclaimed poet, critic, and librettist Dana Gioia has published four full-length collections of poetry, including Interrogations at Noon, which won the 2002 American Book Award in poetry. Former chairman of the National Endowment for the Arts, Gioia holds the Judge Widney Chair in Poetry and Public Culture at the University of Southern California.

Co-sponsored with the Chicago Public Library

The annual bilingual festival Poesía en Abril returns to the Poetry Foundation for readings by two of its featured poets. Olvido García Valdés is the author of a dozen collections of poetry, including Y todos estábamos vivos, which won Spain’s National Poetry Prize in 2007, as well as books of translation, prose, and art criticism. Distinguished Mexican poet and translator Héctor Carreto has won the prestigious Luis Cernuda and Aguascalientes National Poetry prizes.

The Harriet Reading Series features talks, performances, and readings by poets whose work has appeared on Harriet, the Poetry Foundation’s blog. Writer and critic Jon Leon is the author of The Malady of the Century,Elizabeth Zoë Lindsay Drink Fanta, The Hot Tub, and a number of privately issued titles and special editions.

Created by acclaimed pianist Inna Faliks, Music/Words is an interdisciplinary performance series that explores the connections between poetry and music in the form of a live recital and reading with prize-winning novelist and poet Jesse Ball.

Please join us as we celebrate the first books from two talented young poets. Danielle Chapman is the author of Delinquent Palaces, out this spring from Northwestern University Press. Nate Klug’s first book of poems, Anyone, will be issued in March 2015 from the University of Chicago Phoenix Poets Series.

Monday–Friday, 11 am – 4 pm, and during any of our evening or weekend events.

Trevor Winkfield has for several decades collaborated with many poets of the so-called New York School. This exhibit comprises original designs of Winkfield’s book covers for such poets as Charles North, Miles Champion, and Larry Fagin, together with limited-edition books done in collaboration with Harry Mathews, John Ashbery, and Ron Padgett. Also included are several striking canvases by Winkfield, including portraits of poets and a large tableau, The Poet and His Muse. This exhibit is presented in collaboration with Tibor de Nagy Gallery, New York.

Commissioned by the Poetry Foundation, The Chicago 77 is a 77-line poem comprised of found text and objects from each of Chicago’s 77 community areas. The piece was created by poets and artists Fatimah Asghar, Krista Franklin, Fo Wilson, and Jamila Woods. The completed poem has been printed in a single edition on paper made by artists and Margaret Mahan and Drew Matott.

Artist Cheryl Pope will activate various spaces of the Poetry Foundation through installation, sculpture, and performance in collaboration with her team of JUST YELL young Chicago poets.

About the Poetry Foundation

The Poetry Foundation, publisher of Poetry magazine, is an independent literary organization committed to a vigorous presence for poetry in our culture. It exists to discover and celebrate the best poetry and to place it before the largest possible audience. The Poetry Foundation seeks to be a leader in shaping a receptive climate for poetry by developing new audiences, creating new avenues for delivery and encouraging new kinds of poetry through innovative literary prizes and programs. For more information, please visit poetryfoundation.org.

About Poetry Magazine
Founded in Chicago by Harriet Monroe in 1912, Poetry is the oldest monthly devoted to verse in the English-speaking world. Monroe’s “Open Door” policy, set forth in Volume 1 of the magazine, remains the most succinct statement of Poetry’s mission: to print the best poetry written today, in whatever style, genre or approach. The magazine established its reputation early by publishing the first important poems of T.S. Eliot, Ezra Pound, Marianne Moore, Wallace Stevens, H.D., William Carlos Williams, Carl Sandburg and other now-classic authors. In succeeding decades it has presented—often for the first time—works by virtually every major contemporary poet.

About the Poetry Foundation Library
The Midwest’s only library dedicated exclusively to poetry, the Poetry Foundation Library invites the reading of poetry through its collections and public programs. Browse a collection of more than 30,000 volumes. Experience audio and video recordings in private listening booths. View exhibitions relating to the world of poetry. The library continues to offer its weekly Wednesday Poemtime, a storytime event for children ages two through five that introduces poetry through fun, interactive readings and crafts; and field trips that welcome group visits from students of all ages and lifelong learners. To learn more or to arrange a field trip, contact library@poetryfoundation.org.