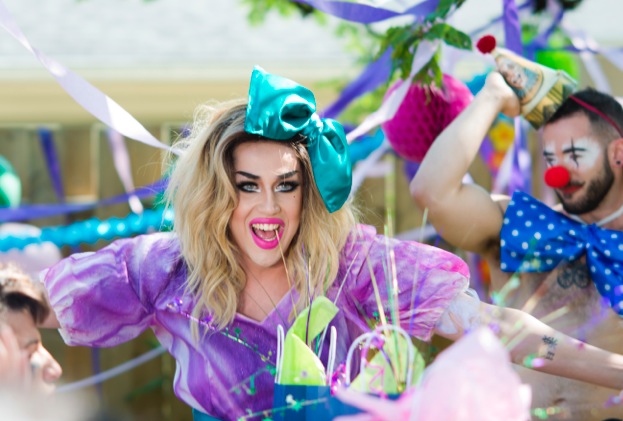 Adore Delano won the hearts of millions, clawing her way to the Top 3 on this past season’s RuPaul’s Drag Race. With ferocious performances and her patented biting attitude, the teenage queen of wigs n’ cigs went on to conquer three challenges, tying Bianco Del Rio with most episode wins. Now she has released her debut full-length album, Till Death Do Us Party, featuring “DTF”, “I Adore U”, “Party”, “Hello, I Love You” and “I Look F*ckin’Cool” – the first five smashes from Till Death Do Us Party that launched her album to the #1 spot on the iTunes dance charts and made Adore Delano the highest selling artist of any RuPaul’s Drag Race contestant.  The album is available for purchase on iTunes.
“It’s a playful pop album with heart and soul,” says Adore Delano of Till Death Do Us Party. “The songs are really fun. I wrote every one based on experiences from my life.  They all have a giant piece of me in them,” she laughs.
Adore Delano became a breakout star on the sixth season of RuPaul’s Drag Race.  She wasn’t new to reality television, however, having completed on seasons 6 and 7 of American Idol as her male persona, Danny Noriega.  “I never felt so in drag than when I was out of drag”, she says of her American Idol experience, acknowledging a sense of shame for having tamed her look for the show.
Determined not to live with one more ounce of regret, he decided he would do things his way, and only his way, from there on out. He entered a drag competition in West Hollywood as Adore Delano, whom he affectionately refers to as “the super hero for my soul”, and won.
In December 2013, Logo announced that Adore Delano was among 14 drag queens competing on the sixth season of RuPaul’s Drag Race.  Adore would go all the way to the show’s finale, vying for the top prize against Bianca Del Rio and Courtney Act.
“RuPaul’s Drag Race gave me the opportunity to express myself, and to become a role model for those who don’t necessarily fit in,” she says today.  “I’m representing the new queens, the weirdos, the unpolished.  I stand for those who have been told ‘you can’t do this.’ I’m here to say, ‘you can’.  You should never question yourself, if you want to do something, do it”.
Taking her words to heart, Adore Delano has embarked on a nationwide tour.
“I will bring drag back into the mainstream market with this album,” Delano declares.  “It’s about time we get taken seriously as artists.”
Till Death Do Us Party is available on iTunes now.  For more information, visit www.adoredelano.com.