ALBERT SAMUELS (Director, Producer, Writer) discusses the evolution of the hit show 50 SHADES!
THE MUSICAL – THE ORIGINAL PARODY which is returning to Chicago and will play at the Broadway Playhouse at Water Tower Place (175 E Chestnut) for one week only, Oct. 22 – 27, 2013. For more information visit BroadwayInChicago.com 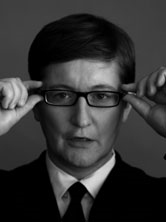 ALBERT SAMUELS (Director, Producer, Writer) is a founding member of Baby Wants Candy, toured with Second City’s National Touring Company and co-wrote and performed in two critically acclaimed reviews on Second City’s Mainstage. He co-created and starred in the NBC Comedy “Sports Action Team” and the comedy “The Venue,” which won Best Pilot in the Comedy Central Pilot Competition.
Thanks to Emily.

Broadway In Chicago is pleased to announce that, after sold out audiences in New York and a hit run at the Edinburgh Fringe Festival with a 4-star review, 50 SHADES! THE MUSICAL – THE ORIGINAL PARODY is returning to Chicago and will play at the Broadway Playhouse at Water Tower Place (175 E Chestnut) for one week only, Oct. 22 – 27, 2013. Individual tickets are on- sale now, starting at $29.

The Fifty Shades of Grey trilogy has shattered sales records around the globe with more than 32 million copies sold in the United States alone and a 2013 Universal Pictures feature film release is sure to be a cinematic blockbuster. A sexy, hilarious romp, 50 SHADES! THE MUSICAL is a laugh out loud night of fun that audiences won’t want to miss!

50 SHADES! THE MUSICAL opens with a ladies book club deciding to read Fifty Shades of Grey. Through their interpretation of the novel, the audience is led on a hilarious roller coaster ride of this unlikely bestseller. The show is full of dance numbers, 11 original songs and a live band backing the performance. Original songs include “They Get Nasty”, “I Don’t Make Love”, and “There’s a Hole Inside of Me”.

Like the book series, 50 SHADES! THE MUSICAL is surely not for those under the age of 18, but does not cross boundaries that would make general audiences squirm.

50 SHADES! THE MUSICAL is produced by Marshall Cordell, Albert Samuels and Emily Dorezas.

Quotes about 50 SHADES! THE MUSICAL “Finally a play your inner goddess, your book club and your mother-in-law can all agree on!” -Time

Magazine “50 Shades! The Musical is the perfect appetizer to the upcoming movie!” – Entertainment Weekly “A very good laugh… impossible to resist the fervor!” -The Chicago Tribune “HIGHlariously Hawt! Absolutely perfect! Catch it if you can!” – Perez Hilton “PURE UNADULTERATED HUMOR!” -The Daily Beast