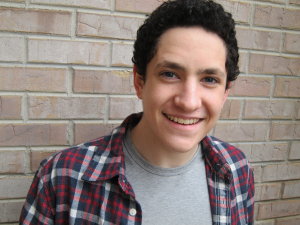 Broadway In Chicago crafted a full day of workshops with theatre professionals for the twenty-four finalists that culminated in a performance on stage at the Broadway Playhouse at Water Tower Place. During the day, finalists auditioned for a panel of casting agents and theater professionals who chose the recipients of performance awards, as well as the newly-established honor for High School Musical Scenic Design, The Grosh Scenic Design Award.

ABOUT THE NATIONAL HIGH SCHOOL MUSICAL THEATER AWARDSJonah Rawitz and Julia Lindsey Whitcomb will be provided with an all-expense paid trip to participate in a performance enrichment program, representing the state of Illinois at the National High School Musical Theater Awards, on Broadway, on Monday, June 30, 2014. The National High School Musical Theater Awards, also known as The Jimmy™ Awards, are named for legendary Broadway theater owner and producer James M. Nederlander. Broadway In Chicago is a Nederlander presentation, and is excited to join the network of theatres across the country participating in The Jimmys™.

The National High School Musical Theater Awards (NHSMTA) was established in 2009 to elevate the importance of theater arts education in schools and reward excellence in student performance. The program impacts more than 50,000 students annually who participate in high school musical theater competitions sponsored by top professional theaters throughout the United States. Each year, winners of these competitions are flown to New York City to compete at Nationals.

ABOUT GROSH BACKDROPS & DRAPERY
Grosh Backdrops & Drapery supplies schools and theaters with an extensive selection of backdrops and drapery at the most competitive pricing. A choice of sizes and beautiful scenes help you enhance any production. Two warehouse locations reduce shipping times and cost. Visit us online to view our entire inventory of 5,000 products in 75 unique categories, check pricing and availability, and to reserve your order today at www.grosh.com.

ABOUT BROADWAY IN CHICAGO
Broadway In Chicago was created in July 2000 and over the past 14 years has grown to be one of the largest commercial touring homes in the country. A Nederlander Presentation, Broadway In Chicago lights up the Chicago Theater District entertaining well up to 1.7 million people annually in five theatres. Broadway In Chicago presents a full range of entertainment, including musicals and plays, on the stages of five of the finest theatres in Chicago’s Loop including the Bank of America Theatre, Oriental Theatre, Cadillac Palace Theatre, the Auditorium Theatre of Roosevelt University and just off the Magnificent Mile, the Broadway Playhouse at Water Tower Place.