Northlight’s THE WHIPPING MAN Explores The Cost of Freedom 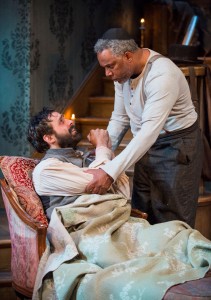 If  there is ever a doubt about the true emotional rawness of theatre, one only has to attend the Chicago premiere of Matthew Lopez’ powerful drama The Whipping Man to see the full force of the medium in action.   Set in the seemingly post apocalyptic aftermath of the Civil War, this three person drama instantly brings the audience into a world in which the tyranny of slavery has just ended and the master/slave juxtaposition is turned on its head, all in the spirit of a brilliant Mark Twain novel.

As the play opens we find injured Confederate solider Caleb, coming home to find his family abode in ruins.   He is tended to by the family’s eldest slave, Simon who tackles with the orders Caleb is delivering, reminding his former master that they are now living in a free country.   As the bullet wound Caleb suffers proves dire, Simon convinces Caleb that the gangrened portion of the leg must be amputated before the infected kills him.  Enter John, another family slave who grew up akin to Caleb and who finds his newfound freedom a reason to “discover” other peoples vacated possessions.   Simon enlists John to help with the amputation in a scene that will give you chills.   As the play manifests the three men explore their past and in so dong, we discover how they are forever connected in the most unexpected of ways.

Directed by Kimberly Senior who just delivered a knockout production of The Letters at Writers’ Theatre, perfectly paces this material as well as allowing her actors to find their own rhythm.   Ms. Senior has also cast three actors who go well beyond their own conformability levels and dig deep into the physiological damage their character’s inhabits.

Though for most of the play Derek Gaspar’s Caleb is confined to a chaise, his eyes manifest each emotion exquisitely.  Whether it is sheer pain, betrayal, love, or joy, Mr. Gaspar is gripping in his stillness.   Sean Parris portrayal of John is a bit more manic as he gets explore a multitude of emotions, as would immature teenager, yet he is dealing with these feelings as an adult.  Mr. Parris brings much humor to the role but never at the cost of making light of the dire situation of all three men and instantly can turn that humor into angst as he describes his torture under the whip. 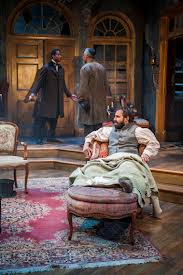 Then there is Tim Edward Rhoze who not only dominates this production but gives his character Simon so much intrinsic truth that you are invested in his character from the moment Simon enters the stage.  As a triad, these actors feed off each other throughout the production and shows what Mr. Misner meant by living in the moment.  Each actor leaves it all right there on the stage for all to see; raw and unabashedly real.

All of the design elements are expertly interwoven to tell this story including Jack Magaw’s set design of a once glorious mansion now left to be so ominous; Christine A. Binder lighting mixes perfectly with Christopher Kriz’ sound to create an eerie feeling of uncomfortablilty and Rachel Laritz’ costumes always ring true.

What shines most about Mr. Lopez’ work is the humanity of the characters.  Even with the most abhorrent of actions, each character is given great breath to make them multi-dimensional.  By doing this, The Whipping Man is a unique exploration of trust, faith and forgiveness at a time when the aggrieved began their journey of the concept of freedom.