ENJOY PERFORMANCES BY THE I LOVE LUCY® LIVE ON STAGE CAST WHILE DINING AT PETTERINO’S! 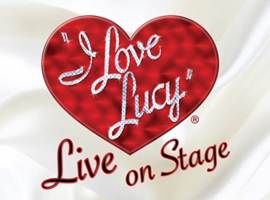 ABOUT I LOVE LUCY® LIVE ON STAGE

Imagine stepping back in time and into the Desilu Playhouse soundstage!  It’s 1952 and you are a member of the studio audience awaiting the filming of two hilarious and oh so familiar “I Love Lucy” episodes.  A charming host entertains and enlightens you to the behind-the-scenes filming process, the 1950’s hi-fidelity technology, and this brand new thing called ‘television’.  The episodes begin and you witness, firsthand, the side-splitting antics of that crazy redhead in the Ricardo’s New York apartment and thrill to the Cuban sounds of “The Ricky Ricardo Orchestra” at the famed Tropicana Nightclub.  In between scenes?  The Crystaltone Singers perform live advertising jingles of the show’s newest sponsors in perfect 50s style harmony.  Can you say ‘Brylcreem’?!

The iconic television hit sitcom “I Love Lucy” was most recently honored in September 2012 as the “Best TV Show Of All Time” and the “Greatest TV Comedy” by People Magazine and ABC’s “20/20” special “Best in TV: The Greatest TV Shows of Our Time.” I LOVE LUCY® LIVE ON STAGE is produced under license from CBS Consumer Products.

Individual tickets for I LOVE LUCY® LIVE ON STAGE are on-sale now for performances through March 3, 2013 and range from $35–$85.A select number of premium seats are also available. Tickets for groups of 10+ start at $25 and can be purchased by calling 312-977-1710. Tickets are available at all Broadway In Chicago Box Offices (24 W. Randolph St., 151 W. Randolph St., 18 W. Monroe St. and 175 E. Chestnut St.), the Broadway In Chicago Ticket Kiosk at Water Tower Place (845 N. Michigan Ave.), the Broadway In Chicago Ticket Line at (800) 775‐2000, all Ticketmaster retail locations and online atwww.BroadwayInChicago.com. For more information, visit www.BroadwayInChicago.com or www.ilovelucylive.com.

ABOUT MONDAY NIGHT LIVE AT PETTERINO’S

Monday Night Live at Petterino’s is an impromptu musical showcase in an open mic format co-hosted by Chicagoans Denise McGowan Tracy and Beckie Menzie. The series began as a way to bring live music to Chicago’s theater district on a typically “dark” night for entertainment while providing an upscale, sophisticated venue for performers to share their talent.  Since opening in September, 2007 over 500 singers from the worlds of theater, cabaret and jazz have shared their musical talents making MNL “the” place to be for a unique, live entertainment experience in Chicago.