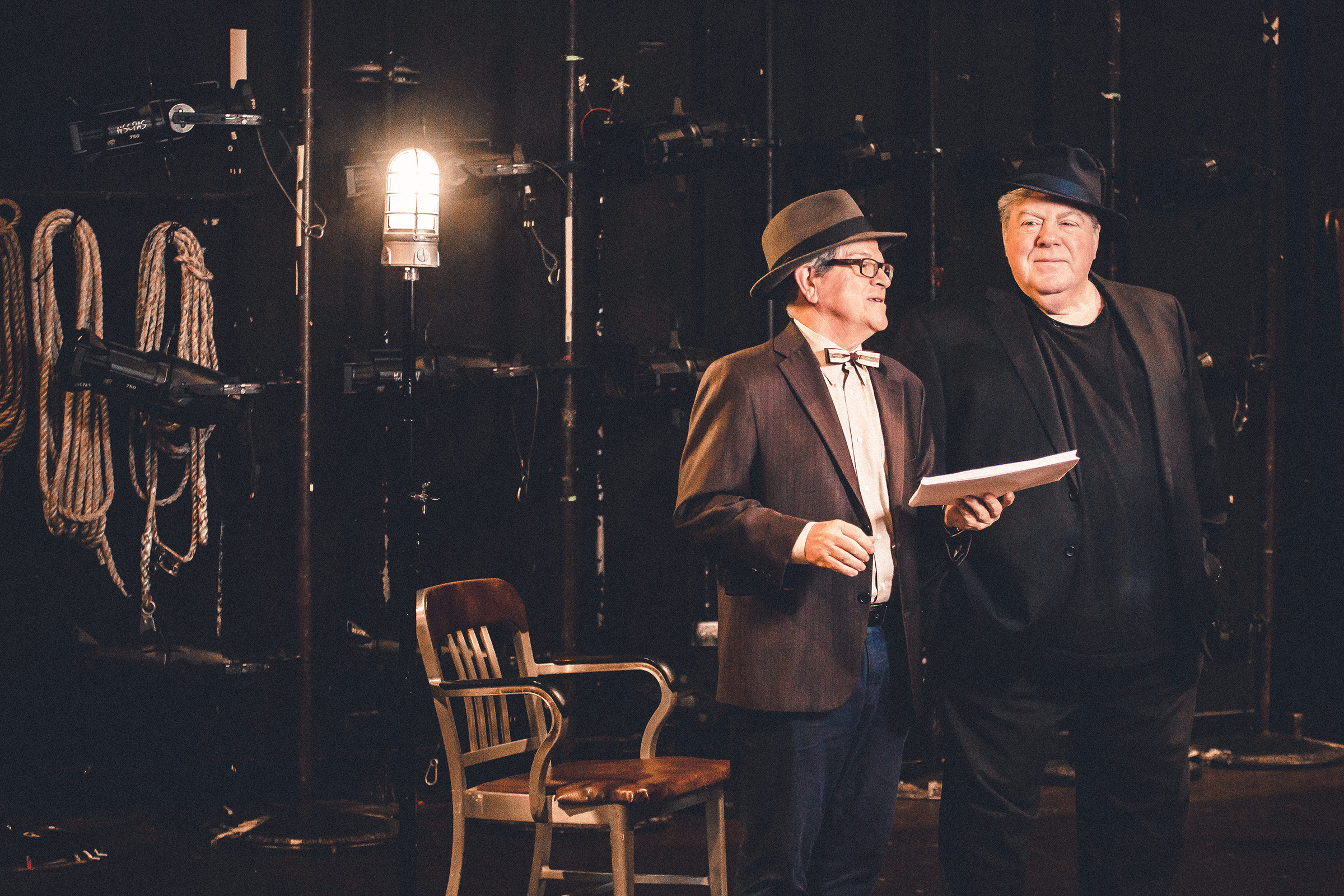 New York City, 1959. Fading vaudeville comic Chick Sherman, along with his long-suffering agent, tries to revive his career with a role in an avant-garde off-Broadway play. While his grown daughter searches for answers from her absentee showbiz father, a lifetime of private and professional struggles rise to the surface, cracking the polished public persona of the world’s favorite former “funny man.”

BJ Jones comments, “George Wendt and Tim Kazurinsky return to Northlight in our fourth world premiere play by Bruce Graham. We’re thrilled to welcome back our friends and collaborators and to continue our commitment to new work with this seriocomic show business tale of theatre, friends and family.”

Bruce Graham (Playwright) Plays: White Guy on the Bus, Stella & Lou, The Outgoing Tide (2011 Jeff Award – Best New Play), Burkie, Early One Evening at the Rainbow Bar & Grille, Moon Over the Brewery, Belmont Avenue Social Club, Desperate Affection, Coyote on a Fence (Winner of The Rosenthal Prize, Two Drama Desk Nominations), According to Goldman, The Philly Fan, Mister Hart and Mister Brown. He has won consecutive Barrymore Awards for Best New Play for Something Intangible and Any Given Monday. Film:Dunston Checks In, Anastasia, Steal This Movie. TV: Roseanne, Ring of Endless Light (Humanitas Award Winner – Best Children’s Screenplay), The Most Wonderful Time of the Year, Trading Christmas. Graham is a past winner of the Princess Grace Foundation Statuette. Along with Michele Volansky, he is the author of the book The Collaborative Playwright. Graham teaches film and theatre courses at Drexel University. He divides his time between South Philly and Elkton, Maryland, with Stephanie.

BJ Jones (Director/Artistic Director) is in his 18th season as Artistic Director of Northlight, where he commissioned and directed the world premieres of White Guy on the Bus,Chapatti, Stella & Lou, The Outgoing Tide (Jeff Nomination – Best Director), Better Late, and Rounding Third. Notably he has directed productions of Outside Mullingar, Grey Gardens, The Price (Jeff Nomination- Best Director), A Skull in Connemara, The Cripple of Inishmaan, and The Lieutenant of Inishmore. As a producer he has guided the world premieres of Shining Lives, The Last Five Years, The Gamester, and Studs Terkel’s ‘The Good War’. From Second City to Shakespeare, BJ has directed Pitmen Painters (Jeff Nomination – Best Director, TimeLine), A Number (Next), 100 Saints You Should Know (Steppenwolf), and The Dresser (Body Politic). Regional: Glengarry Glen Ross (Suzie Bass Nominee – Best Director, Atlanta’s Alliance Theatre), Enchanted April (Asolo Theatre), and productions at Cherry Lane Theatre NY, Galway Arts Festival, Baltimore Center Stage, and Utah Shakespeare Festival. As a performer, Mr. Jones is a two-time Joseph Jefferson Award winner and has appeared at Northlight, Goodman, Steppenwolf, Court, and other theatres throughout Chicago. Film/TV credits include The Fugitive, Body Double, Law and Order: Criminal Intent, Early Edition, Cupid, and Turks, among others.

Amanda Drinkall (Katharine Sherman) Recent Chicago credits include Last Train to Nibroc (Haven), White Guy on the Bus (Northlight), Venus in Fur and Measure for Measure(Goodman), Rest (Victory Gardens), Great Expectations (Strawdog), Pride and Prejudice (Lifeline), and numerous plays with The Back Room Shakespeare Project includingOthello, As You Like It and The Tempest. As an ensemble member of Red Tape, her credits include hamlet is dead. no gravity, Lear, The Skriker, Brand, The Love of the Nightingale and Pullman, WA. Regional credits: Michigan Shakespeare’s The Comedy of Errors and Romeo and Juliet and North Carolina Shakespeare’s King Lear and Much Ado About Nothing. Film credits: The View from Tall. Ms. Drinkall holds a BFA in acting performance from the University of Illinois at Urbana-Champaign.

Steve Haggard (Matthew Baroni) returns to Northlight where he was last seen in Season’s Greetings and She Stoops to Conquer.  Recent Chicago credits: Doubt: A Parable(Writers), Accidentally Like a Martyr and The Aliens (A Red Orchid), Tribes (Steppenwolf), Wasteland (Timeline), King Lear (Chicago Shakespeare). Regional credits: American Players, Milwaukee Repertory and Indiana Repertory.  Steve is an ensemble member of A Red Orchid and a graduate of The Theatre School at DePaul University. Love and thanks to K, M and Q.

Tim Kazurinsky (Milt “Junior” Karp) After 14 months on the road as the  Wizard of Oz in Wicked and 4 months on Broadway as the Angel Gabriel in An Act of God, Tim is thrilled to be back home and at Northlight. Other stage credits include: Old Jews Telling Jokes (Royal George), The Odd Couple (Northlight), A Midsummer Night’s Dream(Chicago Shakespeare), Hairspray (Drury Lane), The Bicycle Men (Lakeshore) and three revues at The Second City. TV credits include: Saturday Night Live (NBC, 1981- 84), Curb Your Enthusiasm (HBO), Dinner at Eight (TCM) and The Princess and the Pea (Faerie Tale Theatre). Film credits include: Police Academy II, III, & IV, My Bodyguard, Continental Divide, Neighbors, About Last Night…, Somewhere In Time, Shakes the Clown, and I Want Someone to Eat Cheese With. Screenwriting credits include: About Last Night…, For Keeps, The Cherokee Kid and Strange Relations, for which he received WGA and BAFTA nominations.

Rob Lindley (Victor LaPlant) is making his Northlight debut. Other acting credits include: The Secret Garden, James Joyce’s “The Dead,” Angels in America: Parts 1 & 2,Caroline or Change and Carousel (Court); Bach at Liepzing, Oh Coward! (Writers); Candide (Goodman); Wings (Appletree); Urinetown (Mercury); The Most Happy Fella(Ravinia); A New Brain, Sweeney Todd, Closer Than Ever (Porchlight). Directing credits: How to Succeed in Business Without Really Trying, Lady Day at Emerson’s Bar & Grill (Porchlight) and the musical parody 50 Shades!: The Musical, which played around the country and Off-Broadway. Rob won a Jeff Award for his performance in Oh Coward! and his cabaret trio Foiled Again has won an After Dark Award for Outstanding Cabaret Performance. Foiled Again’s album Blanket of Winter is available on iTunes and CDbaby.com. This winter Rob will direct the musical version of Far From Heaven at Porchlight. A big thank you goes out to BJ and Lynn.

Michael Perez (Nathan Wise) is a California native who has found an artistic home here in Chicago. Chicago credits include Short Shakes! Macbeth (Chicago Shakespeare),The Liar (Writers), The Foreigner (Provision) and three winters in A Christmas Carol (Goodman). He’s done outdoor Shakespeare with American Players, Montana Shakespeare in the Parks, Door Shakespeare and Riverside Theatre. Michael is a proud stakeholder of the Back Room Shakespeare Project.

Backstage with BJ is a mid-day discussion with Artistic Director BJ Jones, featuring special guest artists, actors, directors and designers, offering behind-the-scenes insight into each production while it is still in rehearsal.  Backstage with BJ for Funnyman will be held on Friday, September 4 at 12:00pm and will last approximately one hour.  Reservations are required, 847.679.9501 x3605 or specialevents@northlight.org.

An Open Captioning performance is scheduled for Saturday, October 3 at 2:30pm.

Funnyman is supported in part by Tom Stringer Design Partners.